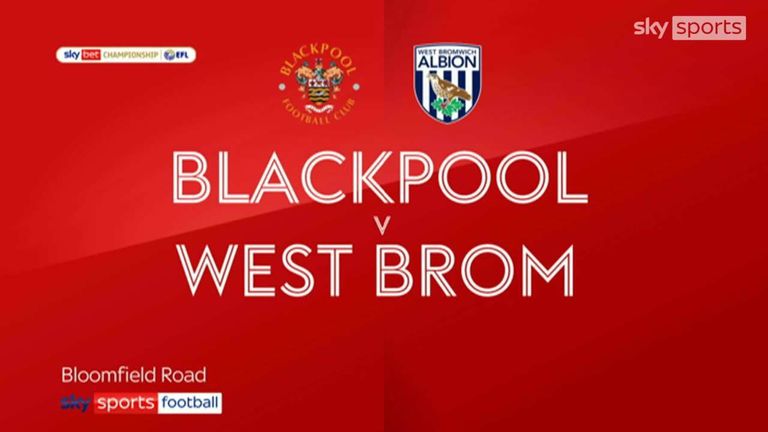 Battling Blackpool clung on for a precious point as they frustrated promotion-chasing West Brom at Bloomfield Road in an entertaining 0-0 draw.

The hosts soaked up a barrage of pressure as the Baggies dominated proceedings but, despite creating a string of chances, the visitors could find no way through.

And that means Valerian Ismael's team have still not won away from home for nearly two months.

The Baggies have also not won away at Blackpool since February 2010 as the Seasiders stretched their recent unbeaten run to three matches to boost their own lofty play-off ambitions.

The visitors had the first chance of the evening as striker Karlan Grant cut inside the box and had a powerful shot charged down.

At the other end, the recalled Shayne Lavery proved a nuisance and caused Albion keeper Sam Johnstone to pull off a smart close-range save.

Midfielder Alex Mowatt combined well with Conor Townsend, but he blazed a left-foot shot high and wide from an acute angle.

Townsend had a great chance of his own on the half-hour mark, but his fierce left-footed strike was parried by an alert Grimshaw and collected at the second attempt.

Defender Reece James made a desperate clearance moments later, as the hosts found themselves under sustained pressure.

And former Huddersfield hitman Grant forced a smart block from Grimshaw at his near post.

But it was Neil Critchley's battling side who nearly took the lead against the run of play.

Johnstone produced a wonder save to thwart Gary Madine from point-blank range, before somehow getting to his feet to block Keshi Anderson's header at the back post. It was a quite brilliant double block.

The relentless pace of the game continued following the restart and, after just two minutes, Madine had a shot charged down in the area.

Brighton loanee Molumby tried his luck from the edge of the box, but he saw his goalbound strike blocked by Anderson, who did well to track back.

Substitute Callum Robinson teed up fellow replacement Jordan Hugill, but the Norwich loan striker saw his shot agonisingly deflected over the bar after a fine block from defender James Husband.

Sub CJ Hamilton should have put the home side ahead in the 76th minute, but the ring-rusty midfielder snatched at his shot and fired horribly over from close-range.

Defender Matt Clarke forced a good low save from Grimshaw as Albion threatened once again, but to no avail.

And then Grant poked inches wide at the near post from Townsend's low cross as the visitors were frustrated further. It summed up the Baggies' frustrating evening.

Blackpool's Neil Critchley: "I thought it was a really good game, it was an entertaining 0-0. Both teams contributed towards that. We started really well in the game, on the front foot and took the game to them. We played with real energy and had some big moments in the game. Not necessarily big chances, but big moments which could have led to chances. We failed a little bit, but you know with the way they play - and the physicality they have in the team - that at some point they might get on top of you.

"That's been a common theme of the games I've watched them play. In the second half they got on top of us, but we defended our goal unbelievably well. We got bodies in the way, blocks and defended brilliantly well. And we had some big chances ourselves in the second half. They don't concede many goals and it's hard to create clear cut opportunities against them - and we created clear cut chances tonight. We might have taken one of them - and we might have won. But overall if we're coming away with a point against West Brom, well you have to be generally pleased."

West Brom's Valerien Ismael: "I think it was a great response from Saturday. The performance was exactly what we want to be. Aggressive. Plenty of desire. A strong mentality. Intensity. It was a tough away game and we can take a lot of positives. We need to take what we can get at the minute and getting a clean sheet is a positive. We created a lot of chances, but compared to last Saturday, this time there were more real chances to score. At the minute it's the final ball, and we need to work on that.

"We will keep going because we are really close. We have another game on Friday and we have a massive desire to win that game. It was a little bit of everything in terms of why we didn't score. We have to be a bit more calm and composed in the opposition box to finish the job. They had a lot of bodies in the way too, which helped them. We played well.

"We created a lot of chances, but now we need to finish the job. It's as simple as that. After losing four consecutive games away from home we have managed to stop the bleeding. Now we have to recover for our home game on Friday and we will need our supporters."