Everton are considering replacing Marco Silva before Sunday's clash at Leicester, with David Moyes a strong contender and Eddie Howe also of interest, Sky Sports News has been told.

Defeat at home to the Premier League's bottom side Norwich on Saturday was seen as a new low for the beleaguered Silva, and it has heaped further pressure on the Portuguese. It could lead to a sensational return for former boss Moyes to Goodison Park, possibly on an initial short-term deal until the end of the season, to steady what is currently a sinking ship.

Two wins from their last nine league games has seen the Toffees drop to 15th place in the table - and just four points above the relegation zone.

But Bournemouth boss Howe, who has been on Everton's shortlist in the past, is still favoured by some members of the Everton board. 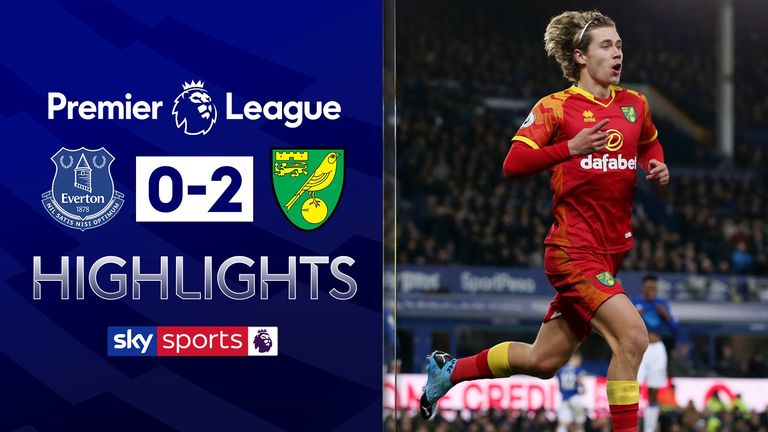 Howe was reluctant to leave the South Coast in 2016 and Everton decided to bring in Ronald Koeman from Southampton instead.

But it is thought that, with Bournemouth on a run of one win in seven Premier League games themselves, Howe may now be more open to a move to Merseyside this time around.

Silva's days at the helm appear to be short numbered after a clutch of Everton fans joined those of Norwich on Saturday chanting that he will be "sacked in the morning", followed by loud boos from the home support at full-time of their 2-0 defeat.

The 56-year-old Moyes is reportedly keen to return to the role in which he spent 11 years before succeeding Sir Alex Ferguson as Manchester United manager in 2013, where he lasted less than 12 months.

Moyes steered Everton to their highest Premier League finish of fourth in 2005 and an FA Cup final in 2009, but also their lowest ever Premier League points tally of 39 in 2004. Everton fans have their say on the club's current situation with pressure increasing on manager Marco Silva following their home defeat to Norwich.

Analysis: 'Time for change at Everton'

"This felt like a line had been crossed - this is Norwich who hadn't scored an away goal in months. That was the worst day in Marco Silva's tenure. The tough run of games coming up is keeping him in a job.

"If you're bringing in a new manager you don't want to bring him in with a run like that. I think Marco Silva will get the Leicester and Liverpool games - if that game on Merseyside goes badly then there's no way back.

"I've got Everton fans in my family and every candidate they've mentioned they've also said they don't want them. David Moyes to come back in almost a Sam Allardyce role - they are so against that you wouldn't believe.

"I'll be massively surprised if Everton aren't in the bottom 3 after those fixtures." 😳@Carra23 and @GNev2 look at the Blues' managerial struggles and the problems they face going forward.

"Personally, I can't believe that, considering the job he did. It's like they are judging David Moyes on what he's done since Everton. They don't want Eddie Howe. There's talk of Mark Hughes.

"There's splits in the boardroom at Everton with Bill Kenwright on one side and Moshiri on the other. They want different things from the manager. It's a massive problem for them.

"The one that could work would be Mikel Arteta with his Everton connections having worked under the best manager in the world a City. I think there will be a change as I can't Everton getting much from those set of results."