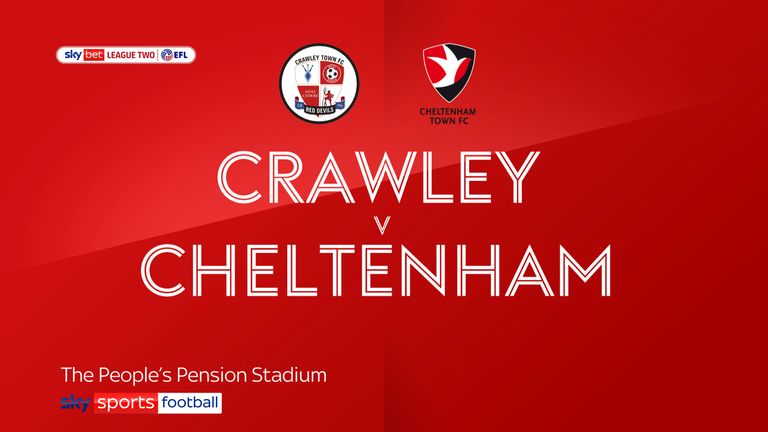 Highlights of the Sky Bet League Two match between Crawley and Cheltenham.

Cheltenham remain a point ahead of second-placed Cambridge, while this was Crawley's second win the space of four days after their 2-0 success at Bradford.

Cheltenham boss Michael Duff said pre-match that his pacesetters had a "good opportunity" to make history and the Robins quickly settled into a confident start.

Alfie May showed good control midway through the half when he had a close-range shot saved by veteran goalkeeper Glenn Morris.

A long ball by Ben Tozer put the Crawley defence under pressure and Callum Wright shot wide from a good position.

Cheltenham had an escape on 34 minutes when Sean Long gave the ball away and Ashley Nadesan wastefully put the ball over after rounding on-loan keeper Josh Griffiths.

The hosts also had a let-off in first-half stoppage time, Tom Nichols deflecting a cross by Chris Hussey onto his own bar.

Another slack back-pass by Long gave striker Nichols an opportunity shortly after the break, but the former Cheltenham loanee shot straight at Griffiths with only the keeper to beat.

Nichols later had a shot saved before an attempted chip by Liam Sercombe came back off the bar at the other end.

Former Leyton Orient man Maguire-Drew clinched victory with his first Crawley goal on 77 minutes, scoring with a well-taken shot in off the post following a Nichols pass.