Harry Kane scored a quickfire second-half double to seal a 2-1 comeback pre-season win for Tottenham over Rangers at Ibrox.

The England captain struck twice in six minutes to make it five goals in three pre-season matches as the Spurs striker looks in great form ahead of the new season.

Spurs needed Kane's rescue act after Antonio Colak gave Rangers the lead in the 24th minute, as the Croatian scored his first goal since joining the club earlier this month from Greek side PAOK.

But five minutes into the second half, Antonio Conte's side were level thanks to a fabulous goal from Kane. The 28-year-old squared up Rangers defender Connor Goldson inside the box, shifted the ball onto his right foot and then unleashed a powerful curling effort past Allan McGregor.

In the 56th minute, Kane combined with Heung-Min Son to volley past McGregor and ensure Spurs remain unbeaten this summer. Such was Kane's performance, he was applauded off by the Ibrox crowd when substituted in the 71st minute.

Rangers substitute James Sands missed the home side's best chance to equalise late on as he headed straight at ex-Celtic goalkeeper Fraser Forster, who was booed by the home crowd on his Spurs debut as he replaced Hugo Lloris in the second half.

It is Giovanni van Bronckhorst's side's only defeat of pre-season as they now prepare for next Saturday's Scottish Premiership opener at Livingston, live on Sky Sports.

Tottenham have been busy this summer having made six new signings with the arrivals of Ivan Perisic, Forster, Yves Bissouma, Richarlison, Clement Lenglet and Djed Spence.

Before the game at Ibrox only Richarlison had featured on the pre-season tour of South Korea, where Spurs beat Team K League 6-3 and then drew 1-1 against Sevilla.

But the win over Rangers saw all six signings involved as substitutes, with Bissouma the first to appear at the start of the second half.

Perisic and Richarlison were next to come on in the 60th minute as the pair combined nicely in added time, with the Croatian crossing from the left only for the Brazilian to head over the bar. Perisic had also seen an acrobatic effort go over the crossbar a few minutes earlier.

Forster, Lenglet and Spence were all given 20 minutes with the latter making an instant impact defensively as he made an important tackle to cut out a dangerous Rangers move.

Kane and Son back to telepathic best

"Tottenham's two main men - Kane and Son - had a great day at the office.

"It might only be pre-season but there are already signs that the duo are back to their telepathic best for the new campaign.

"Some of their touches and link-up play was excellent, and the way they combined for the second Spurs goal was superb.

"Interestingly though, when Richarlison was on the pitch with them briefly, you could tell he was struggling a little to work out how he should fit in, and where to find space."

Are Rangers light up front?

"Rangers competed well by and large throughout the course of the game - especially when you take into account the fact they've lost a couple of important players over the summer and are still bedding in new faces.

"That said, I do wonder if they are a little light up top as the new season draws close. With Kemar Roofe and Alfredo Morelos still out, a lot of responsibility is falling on new signing Antonio Colak.

"You'd imagine they could manage through the initial league games, but will they have enough firepower to get them through the Champions League qualifiers?" 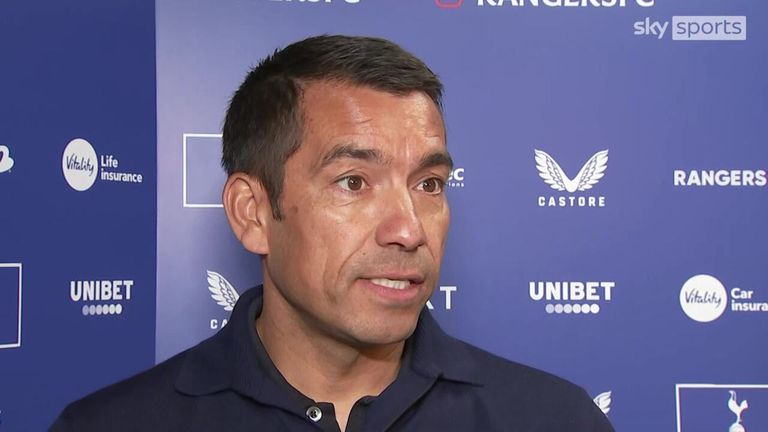 Rangers manager Giovanni van Bronckhorst says he was happy with how his side performed against a strong Tottenham side at Ibrox.

Pre-season is now over for Rangers, who begin their new Scottish Premiership campaign on July 30 at Livingston, live on Sky Sports; kick-off 12pm. Van Bronckhorst's side then play Union Saint-Gilloise in Champions League third round qualifying with the first leg in Belgium on August 2.

Tottenham have one more pre-season game before their new campaign gets started, as Conte's side go to Israel on July 30 to face Roma, who are managed by their former boss Jose Mourinho. Following that game, Spurs then begin their Premier League season on August 6 at home against Southampton.