Celtic are interested in Japanese trio Daizen Maeda, Reo Hatate and Yosuke Ideguchi; Greg Taylor returned from injury in Sunday's 3-0 win at Dundee United; the left-back has signed a new deal until 2025

Greg Taylor is not bothered by suggestions Celtic may sign a new player in his position, insisting increased competition will strengthen the team.

The left-back has returned to the first team after surgery on a shoulder injury, but ahead of the transfer window opening next month, Celtic are considering a return to the Japanese market for signings following the success of Kyogo Furuhashi.

Daizen Maeda, Reo Hatate and Yosuke Ideguchi are all targets for Ange Postecoglou.

But Taylor has dismissed any threat to his first-team position and said he does not pay any attention to transfer speculation. 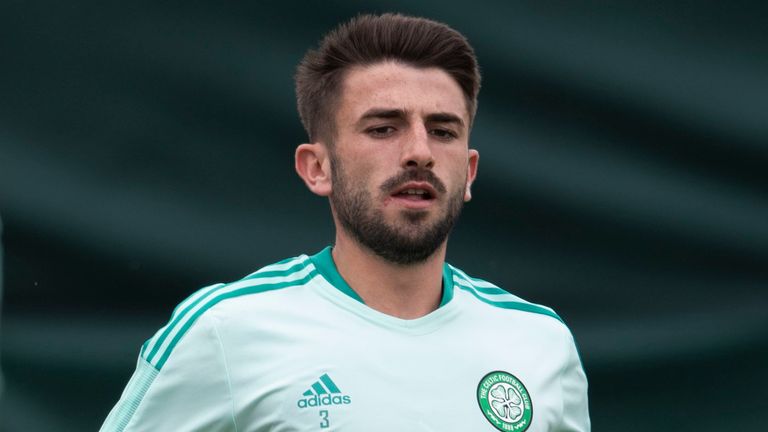 "There's always going to be competition in every place, given the size of this club," he said. "It's normal.

"Every player needs to relish it and hopefully it makes the squad stronger.

"We've got so many games there's no time to check what is being said. We'll be linked with a number of players. Some will be true, some will be false. It's part and parcel of the game.

"We do look forward to having extra reinforcements and it's a strong squad as it is. There's a lot of boys pushing to play already in the building. If we add to that it'll be more competition and it can only improve us.

"Competition drives the standard through the roof. Even if it's in training, the manager is a big believer in that. Even for the boys who aren't playing, the training has to be right throughout the week. It keeps the levels high for the game on the Saturday."

Taylor joined Celtic from Kilmarnock in 2019 and has recently signed a new four-year deal at the club.

He says he's just delighted to be back in the team after the frustration of being sidelined for 11 weeks with a shoulder injury.

"I've been here two and a half years now and I love it here," he said.

"I love playing for the club. There's pressure every week but the type I enjoy. I was desperate to be back out there. For the 11 weeks I was out it was tough to watch.

"The manager's been different class since he came in, especially for myself. It's been a new way of learning to play and one that I've enjoyed.

"There's nothing worse than being on the sidelines and thankfully the boys have put in a good run while I've been out injured. It was nice to continue that when I returned on Sunday."