Callum McGregor: Celtic captain's injury will rule him out until after World Cup, says Ange Postecoglou

Callum McGregor will not return until at least December; the Celtic captain was forced off during Wednesday night's Champions League defeat to RB Leipzig; "The initial report suggest he'll probably be out until after the [World Cup] break at this stage," says Ange Postecoglou 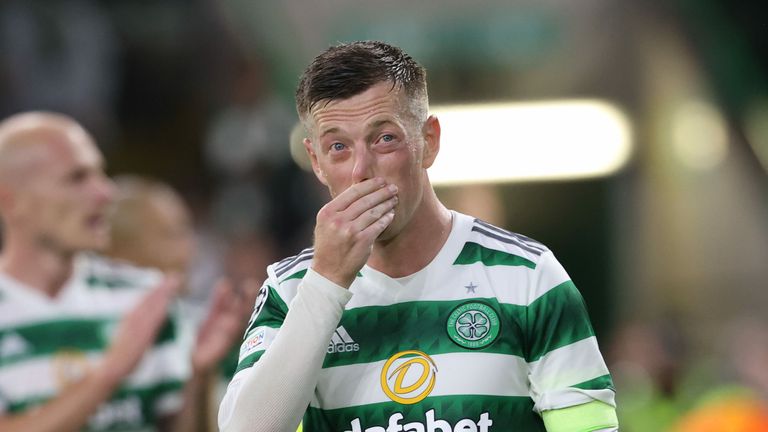 Celtic captain Callum McGregor will be out of action until after the World Cup due to the severity of his knee injury, manager Ange Postecoglou has confirmed.

The midfielder was forced off during Wednesday night's Champions League defeat to RB Leipzig in Germany and, after seeing a specialist on Friday, has had his fears realised with the news that he will not play any competitive football for the best part of three months at least.

He would have missed Celtic's game at St Johnstone on Saturday, live on Sky Sports, through suspension anyway but will now miss a total of at least 11 matches before the Scottish Premiership breaks for the tournament in mid-November.

"The initial report suggest he'll probably be out until after the [World Cup] break at this stage," Postecoglou told Sky Sports. "We've got the final report to come, but it looks like he'll miss the next three or four weeks, which will put him out until after the break.

"The players are well aware of it, we went through a period last year where he was missing, and nothing really changes for us. It's about sticking to our team principles, he's a massive loss on and off the field, but just like any other club - we just have to deal with it."

Summer signing Oliver Abildgaard is one of the options to replace McGregor until he returns.

He replaced the skipper in Germany on Wednesday night, but Postecoglou does not feel he is at the level to fill the void on his own.

"He's getting there. I wouldn't say he's ready because he's only sort of played 40 minutes and the other night we were 3-1 down.

"We are a little bit down in terms of numbers the other night with David Turnbull and Aaron Mooy also missing so was sort of forced there.

"There's not one person that can replace that, it will be a case of the other guys stepping up and filling the breach.

"We missed him for a few games last year and it's just stuff we have to cope with.

"I'm disappointed for Callum more than anything. He's very influential in the group, he wants to be involved all the time and his performances have been super, but we just have to deal with what's ahead of us."

Postecoglou plans to make "at least two or three changes" to his team for Saturday's lunchtime trip to St Johnstone as Celtic bid to ease their Champions League disappointment in midweek by remaining ahead of city rivals Rangers at the top of the cinch Premiership.

Liel Abada is back in contention, while Aaron Mooy and Cameron Carter-Vickers also have a chance of returning following injury.

"The early kick-off on Saturday makes it more challenging because hours of recovery are important," said the Hoops boss. "We didn't get in until 2am on Thursday so we've only really got a 48-hour turnaround to get guys ready for another game. Every hour counts.

"It's where we're at and what we've got to deal with. We'll make at least two or three changes because we know it's going to be a challenging game and we need to freshen up the team. We've got some guys who have been training well and we'll put them in the team and give them an opportunity."