Slavia Prague deny allegations of racism and accuse Glen Kamara of assaulting their player Ondrej Kudela; Conor Goldson says he has "never been so angry" during a match; several Rangers players, including Kemar Roofe who was sent off, have received racist abuse and threats on social media 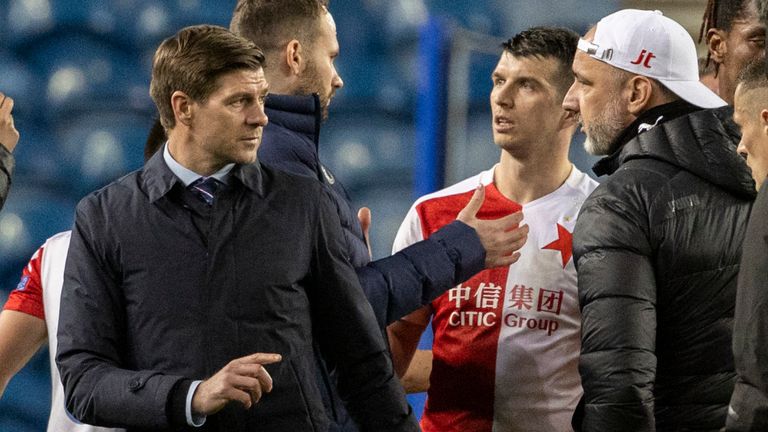 Rangers have demanded action after Glen Kamara claimed he was racially abused by a Slavia Prague player near the end of Thursday night's Europa League defeat.

Furious confrontations erupted in the closing stages of the 2-0 defeat at Ibrox, which saw Rangers knocked out of the Europa League.

Rangers' Connor Goldson and Slavia's Czech international centre-half Ondrej Kudela were booked as a result, and Kamara was visibly furious with a comment made by Kudela.

Czech side Slavia have denied all allegations of racism.

Events that followed the incident after the final whistle:

Gerrard: I back Kamara 100 per cent | Kudela denies racism allegations

"Glen Kamara to me is one of my own, like all of them in that dressing room," said Gerrard. "I 100 per cent believe him, what he's saying in terms of the accusation.

"Other players around it heard it. I will stand toe-to-toe with Glen Kamara."

In a statement released on Slavia's English language website, Kudela admitted he had used offensive language but added: "It was said in emotions, but I absolutely deny there was anything racist in those words."

It was the decision of Rangers' players to remain on the pitch after the alleged racist incident, according to Gerrard.

"I tried to call Glen over during the game, he didn't come over," said Gerrard. "I was going to ask him did he want to leave the pitch? I would have backed him whatever his decision was. The players stayed on the pitch, that was their decision."

He added: "The Slavia player has caused this, and he's caused it to escalate. Something needs to happen quickly that is above me.

"That situation is not normal; why does he cover his mouth to say something? Their people are trying to defend him, and saying he doesn't do it."

Gerrard met with Rangers chairman Douglas Park and sporting director Ross Wilson, as well as UEFA officials on Thursday night after the match.

In a statement released on Friday, Rangers said: "We refuse to acknowledge any attempt to defend, deflect or deny the abuse Glen Kamara experienced last night.

On the alleged racism of Kamara, UEFA told Sky Sports News it is waiting on reports from the match delegate and referee. 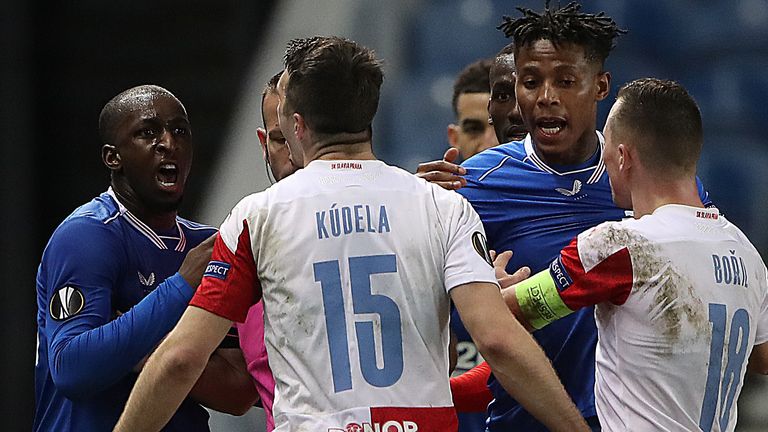 Slavia released a statement on Friday defending Kudela, saying the 33-year-old defender's reputation and that of the club is "being smeared without a single piece of evidence". They also said they were considering filing a civil complaint after claiming Kamara assaulted Kudela.

"The firm commitment to fight racism, xenophobia and all forms of hatred is one of the pillars of Slavia football policy," the statement read. "Any form of racial discrimination is contrary to our values and principles and we shall never tolerate such conduct.

"Ondrej Kudela is one of the team captains elected in secret polls by the players who choose characters that enjoy their trust. He is a decent and modest person with a strong moral integrity, popular amongst the players and fans, a football gentleman. He categorically denies and refutes any allegations of racism.

"We are shocked that his reputation and the club's reputation are being smeared without a single piece of evidence. The only 'alleged' evidence is the player covering his mouth - which Ondrej does on a regular basis when he talks to his team-mates during our games.

"Under the patronage and in the presence of the UEFA delegation, the coaches of both teams, Ondrej Kudela and Glen Kamara met. After the arrival of Slavia representatives, Ondrej was physically abused by the player of Rangers FC who then fled into the locker rooms followed by the manager Steven Gerrard without a single word of apology.

"The incident is thoroughly described in the match protocol and Slavia will consider filing a criminal complaint after their return to the Czech Republic.

"We have felt a great respect to Rangers FC for their recent football performance and glorious history. However, we wish for a UEFA investigation into all incidents related to the recent match and will fully cooperate."

A UEFA spokesperson has told Sky Sports News the organisation "is aware of an incident which occurred in the tunnel after the end of the match and which involved some players of both teams".

"We are waiting to receive detailed reports of the match officials who were present at the game before commenting further," they said.

Police Scotland were called to Ibrox, but have since released a statement saying there were "no reports of criminality have been made by either club in connection with last night's match".

It added: "Police Scotland has contacted club officials and assured them that should any allegation be received it will be investigated thoroughly."

Goldson: I've never been so angry on a football pitch 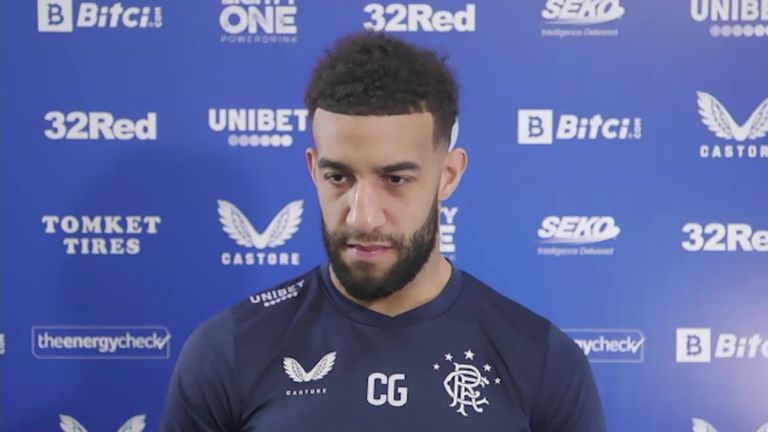 Speaking on Friday, Goldson said he was "disgusted" with the alleged abuse of Kamara and backed his team-mate's claims.

"In the two-and-a-half years he's been here, I don't think you've ever seen him angry or emotional in any kind of way. So for him to get like that then I know something was said and I believe him 100 per cent.

"That's why I reacted in the way I did. The player couldn't even look me in my eyes or speak to me. I've never been so angry on a football pitch.

"I'll be honest, I completely lost my cool and for the remainder of the game all I wanted to do was hurt someone. I've never been like that before on a football pitch."

Goldson insists racism will never be tackled if the powers that be do not start addressing it with serious measures.

He said: "It never will get eradicated because there are so many token gestures out there.

"I'll be honest, taking a knee - token gesture from the higher authorities to make it look like they are doing something to help. But they are not doing anything because when these things happen, there is no consequence.

"There might be a fine but it's never enough. You get fined more for showing an advertisement on your underwear than you do for being racist. It will never change."

Several Rangers players were subjected to racist abuse on the social media platform Instagram after the match, including Roofe.

Roofe was one of two Rangers players sent off after he caught goalkeeper Ondrej Kolar's face with a high boot when challenging for the ball 61 minutes into the tie.

Kolar was taken to hospital with 10 stitches on his head, said Slavia, who accused Rangers of "unprecedentedly malicious play". 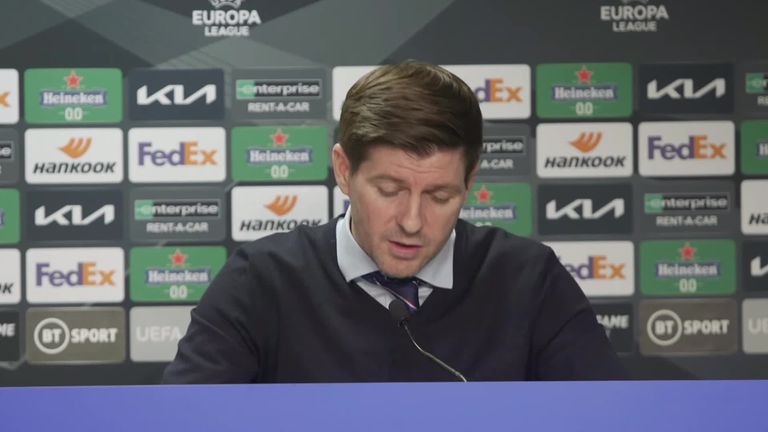 Rangers said: "This is abhorrent and once again highlights the responsibility social media outlets have in eradicating abuse from faceless cowards."

Instagram has told Sky Sports News it has removed a number of comments and accounts as part of their ongoing investigation into the racist abuse of Roofe.