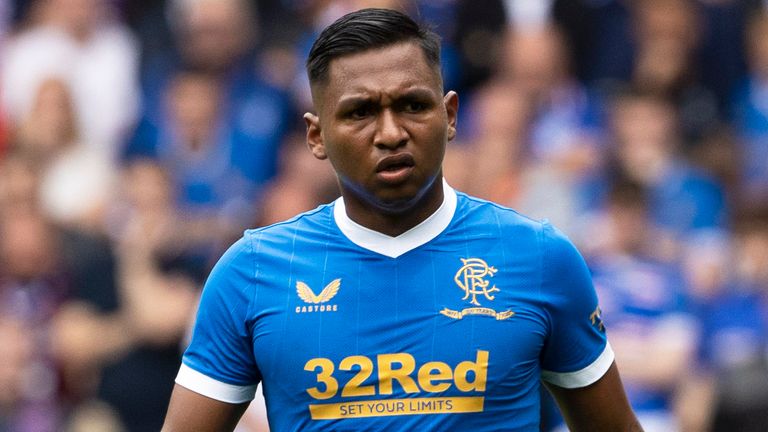 Steven Gerrard says Alfredo Morelos will make his own decision about his future at Ibrox while hinting that the club could be "close" to an agreement with his representatives over a new deal for the forward.

The 25-year-old came close to departing the Scottish Premiership club during the summer transfer window in 2020 when Lille reached an agreement with the forward over a move to the Ligue 1 side, but the deal collapsed.

Morelos, who has two years remaining on his current Rangers deal, was also linked with a move to Porto in this year's summer window.

The Colombia international has been prolific since joining from HJK Helsinki in 2017, scoring 99 goals in 198 games for Rangers, but Gerrard played down his desire to see the striker commit his long-term future to the club.

On the contract situation, Gerrard told Sky Sports: "I think that's Alfredo's decision and his representation's decision, we seem pretty close, there's been a lot of noise from the outside about Alfredo in the three and a bit years I've been here, none of that noise has come from anyone here at Rangers.

"I think Alfredo will make his decisions, I think he made it clear where he wants to be long term but the reality is he's got to perform at a level here for people to show interest in him.

"For me, we like working with him, we like the player, he scores goals. I said last week I still think he can get at a better level in a personal point of view and the goals will come.

"He's been fantastic for me and for us in terms of his goal return since day one, he's played at a consistent level more often than not for sure.

"We've given him support and information, education and development to try to make him better. We've tried to make him more mature as a person, there's been a lot of hours that have gone into Alfredo Morelos, a lot of support, him more than anyone else.

"So look, the relationship is strong and we will try and get him back in the best place we can, and when we do everyone knows he scores more goals consistently and that gives us a better chance of being successful."

During his press conference prior to their game with St Mirren, live on Sky Sports, Gerrard said he can do little more to facilitate Connor Goldson extending his time at Rangers.

The 28-year-old centre-back is out of contract next summer and will be free to speak to clubs in January.

Asked about any new discussions ahead of the 2-0 Europa League win over Brondby at Ibrox on Thursday night, Goldson, a key part of the Light Blues' defence in last season's unbeaten cinch Premiership campaign, said: "I haven't heard anything. I haven't really spoken to my agent or the club recently so I couldn't tell you where it's at."

Ahead of the trip to St Mirren in the Premiership on Saturday, where centre-back Leon Balogun is a doubt with a hamstring injury, Gerrard put the apparent blockage in talks down to "probably both parties".

"Connor is a big boy, he is a man, (sporting director) Ross Wilson's office is next to mine.

"At the same time we have to concentrate on the football so it is important that Connor keep playing as he is. I thought he was magnificent again last night.

"He was my player-of-the-year last year and for me has got more consistent as the time has gone on at Rangers, he is a really valuable player for me and the club.

"So hopefully we can find a solution in terms of getting him tied up.

"I can't really go any further in terms of letting you know how much I want it happen and how much I want him to stay but at the end of the day, I'm not Connor so I don't know what he wants.

"I am not the club and I don't do the bank balances and the numbers so I can only tell both parties how much I want this to happen and then it is down to other people to try to find a solution."

Gerrard, who admitted after the game he would be praying for good news on Balogun's injury, said: "We will give Leon every chance for the weekend, he is still a doubt but not ruled out just yet.

"We will assess him as the day goes along and we will try and get him recovered.

"He has an outside chance for the weekend but we also have to analyse the risk so we will make a really late decision on that one but it is probably 50-50."

Gerrard updated the situation with midfielder Ryan Jack, who had calf surgery, and attacker Ryan Kent who is recovering from a hamstring problem.

He said: "It's a big day for Ryan Jack as he is back with the team in training for the first time in seven months. That's a big plus for us.

"We have had to slow down on Ryan slightly, we are hoping to have him available around the Aberdeen game or just slightly after."