In two spells as Rangers manager, Walter Smith led the club to 10 top-flight titles, five Scottish Cups and six League Cups as well as to the UEFA Cup final in 2008; Smith also had four years in charge of Everton and two with Scotland; a private funeral was held on Wednesday afternoon 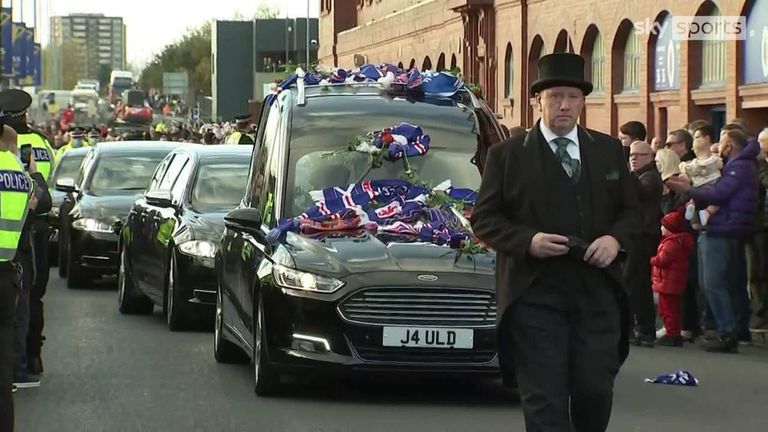 Thousands of supporters lined the streets outside Ibrox and threw flowers, shirts and scarves as the cortege carrying Walter Smith's coffin drove past the main stand, ahead of a private family funeral

Thousands of people gathered outside Ibrox to see the passing of Walter Smith's funeral cortege.

The former Rangers, Everton and Scotland boss died last week at the age of 73.

The Govan club requested privacy for the private funeral held on Wednesday afternoon.

Fans, however, were able to pay their respects to one of Scottish football's greats and there was an outbreak of applause when the cortege turned into Edmiston Drive from Helen Street before making its way to Paisley Road West and on to the motorway.

Emotion hung heavy in the air as flowers and scarves were thrown on to the lead car as it slowly made its way past.

In two spells as Light Blues boss, Smith led Rangers to 10 top-flight titles, five Scottish Cups and six League Cups as well as to the UEFA Cup final in 2008.

A former Dundee United and Dumbarton defender, Smith was appointed manager at Ibrox in 1991, stepping up from assistant to succeed Graeme Souness.

He left the Govan club at the end of the 1997-98 season and subsequently joined Everton.

Smith stayed at Goodison Park for four seasons before a brief stint as assistant manager to Sir Alex Ferguson at Manchester United.

He was appointed Scotland manager in December 2004 and was in charge for three years before returning to Rangers and he retired in 2011.

A memorial service for Smith will be held at Glasgow Cathedral on November 19.