John Lundstram hit a dramatic late winner to send Rangers into their first European final for 14 years with a 3-2 aggregate victory over RB Leipzig in the Europa League semi-final.

At a rocking Ibrox, the home side started with intent as captain James Tavernier opened the scoring early on to become the leading scorer in the competition this season with seven goals.

Glen Kamara added a second before the half-hour mark in a game dedicated to legendary Rangers kit man Jimmy Bell, who died earlier this week.

Christopher Nkunku then levelled the tie for Leipzig in the second half, but Lundstram smashed home the winner in the 80th minute. 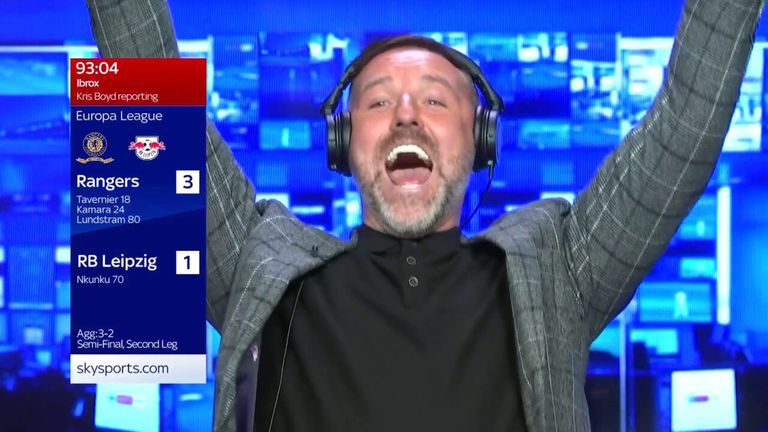 Rangers face Eintracht Frankfurt - who beat West Ham 3-1 on aggregate - in the Europa League final in Seville on May 18, looking to go one better than in 2008 when they lost the UEFA Cup final to Zenit Saint Petersburg.

This was Rangers' 18th game in UEFA competitions this season and also one of their biggest European games at Ibrox since they beat Bayern Munich 2-0 in the 1972 European Cup Winners' Cup semi-final second leg on their way to winning the trophy.

Early on, both sides battled frantically for control before visiting keeper and skipper Peter Gulacsi saved a long-distance drive from Jack in the seventh minute. Willi Orban then headed a corner wide at the other end.

However, right-back Tavernier, who scored twice against Braga in the previous round at Ibrox, struck the first blow, racing in at the back post to knock in a cross from Ryan Kent after good work by Kamara.

More mayhem ensued when Joe Aribo played in Scott Wright to lay the ball off to Kamara who guided a left-footed shot from outside the box past the outstretched arms of Gulacsi. Ibrox was rocking.

Aribo then miss-kicked from five yards out after being set up by Tavernier's header from Borna Barisic's deep cross. 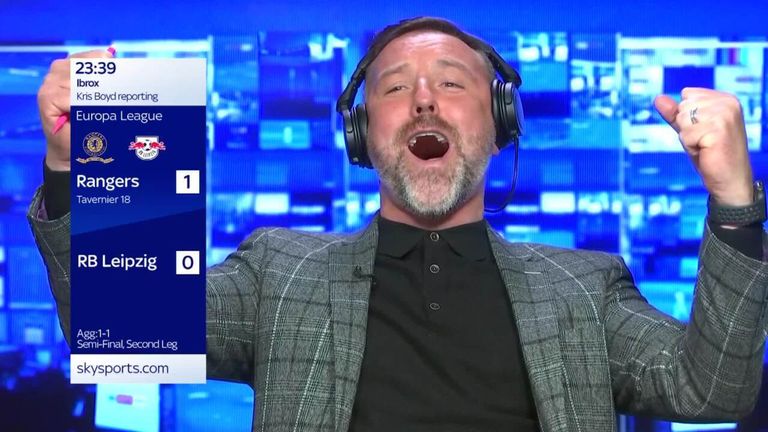 Boyd was speaking at the perfect time on SSN just as Glen Kamara's goal went in...

Just before the break, makeshift centre-forward Aribo then fell to the ground after blocking a powerful free-kick from Angelino with his face and was replaced by Fashion Sakala.

With defenders Connor Goldson, Calvin Bassey and Barisic booked in the first half, the home side had to be cautious - yet retain a threat - as the Bundesliga outfit went in search of a tie leveller.

Wright and Ryan Jack made way for Scott Arfield and Leon Balogun just before the hour-mark as the visitors began to dominate.

Gers keeper Allan McGregor made a great save from Konrad Laimer's drive but moments later he had no chance when Angelino crossed from the left for Nkunku to volley in from 10 yards and the pendulum looked like it had swung towards the visitors.

But only until Lundstram pounced when Kent's cross from the left was cleared to his feet 12 yards from goal and he gleefully drove it low into the net.

Rangers were on their way to Seville.

Rangers react after a famous night at Ibrox 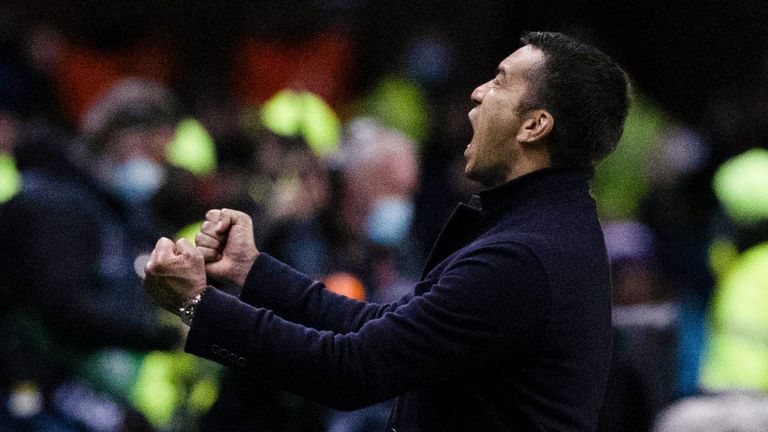 Giovanni van Bronckhorst reflects on an emotional and dramatic night as Rangers reach the final of the Europa League after beating RB Leipzig.

Manager Giovanni van Bronckhorst could not hide his pride for his players:

"It's very hard to find the words. It's been an amazing night.

"We said before the game we'd do everything possible. The players were fantastic. You can't write a script better than this. We're all very proud. We toasted inside to Jimmy [Bell] for this one.

"The two opening goals were fantastic, just like we wanted. We knew Leipzig would come at us, then to score in last 10 minutes gives you an enormous boost.

"Not many players can play European finals. It's not for every player. Once we're there, we need to do everything to win it. It's remarkable."

Captain James Tavernier believes they can lift the trophy in Seville:

He told BT Sport: "First and foremost, we wanted to do it for Jimmy (Bell), and I'm super proud of the effort that all the lads put in, all the staff, and all the fans today. He'd be looking down proud, so would Walter (Smith). I'm absolutely delighted, we're through to the final and you can hear the noise, unbelievable.

"We'll obviously go there (to the final) full of confidence but Frankfurt got into the final for a reason. So it's one game, and we fully back ourselves, and we'll give everything like we did tonight.

"We obviously want to win it, we're in this competition to win, we're a club that wins trophies and that's what we want to do. We want to make all the fans proud - I know we'll be taking a lot over, so it will be great scenes."

"We've been through so many ups and downs this season but to come through it and reach a Europa League final, wow.

"It's my best night by a country mile. Playing in the Premier League was a massive achievement, but to get to a European final...

"Words can't describe how much Jimmy [Bell] meant to everyone. He was the bedrock of the team. I want to dedicate the goal tonight to him, I love him to bits."

It's back to domestic action for Rangers on Sunday as they host Dundee United in the Scottish Premiership.