Koeman: "This is my home and having the opportunity to be the coach of a great team such as Barcelona is a great challenge"

Ronald Koeman has been appointed Barcelona head coach on a two-year deal.

The 57-year-old Dutchman replaces Quique Setien, who was sacked following Barca's humiliating 8-2 defeat to Bayern Munich in the quarter-finals of the Champions League.

Koeman, who spent six years as a player at Barcelona and was a member of Johan Cruyff's legendary 'Dream Team', has taken on the job after he left his role as manager of the Netherlands, which he had held since 2018. 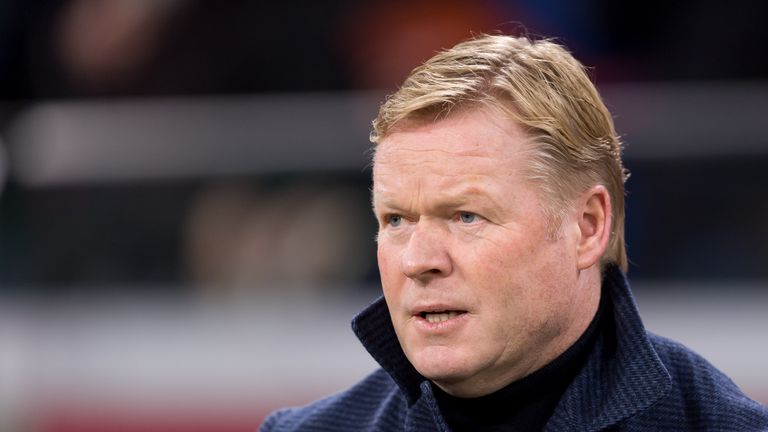 He won four La Liga titles and scored the winning goal in the 1992 European Cup final during his playing days at the Nou Camp, and was the preferred candidate of Barca president Josep Maria Bartomeu.

Koeman was unveiled by Barca on Wednesday evening and said: "Today is a day to be really happy, very proud. Everyone knows what Barca means to me.

"This is my home and having the opportunity to be the coach of a great team such as Barcelona is a great challenge.

"It won't be easy. It's not an easy moment to be at Barcelona, because I expect always the best. That's what I like and that is how it has to be." 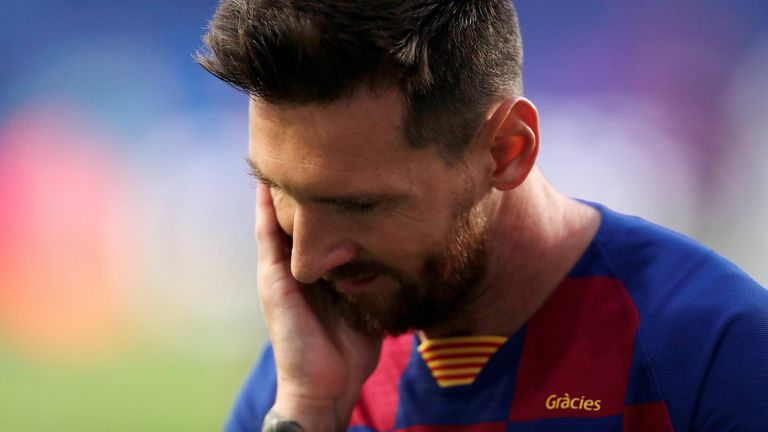 Asked about how he would expect his Barca team to play, Koeman said: "This is a complicated moment because of COVID(-19) but I think football is something that should be enjoyed.

"That is the first thing I am going to say to the players. Without enjoying it, you're not going to do as well as you can do. 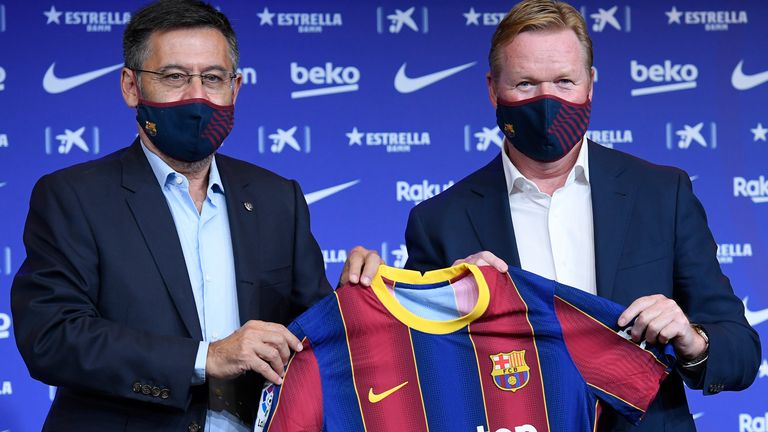 Ronald Koeman says he is coming 'home' after agreeing to take charge of Barcelona on a two-year contract following the departure of Quique Setien.

"We need to work to bring us back to a moment where we can enjoy playing football."

Koeman was also quick to stress that he wants Lionel Messi to remain at the club - in the wake of speculation that the Argentine might wish to leave in the wake of the thrashing by Bayern.

"For me as a coach, I would love to work with Messi because he wins matches. If he is at the ability and the level he has always shown, I would be more than happy for him to stay.

"He's still got a contract and he is still a Barcelona player. There are some older players in the team and we need to make some decisions but in Messi's case I hope that he stays with us." 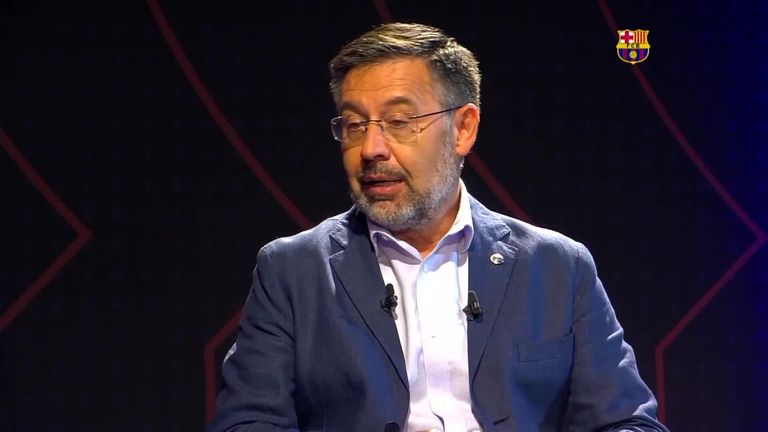 Speaking on Tuesday - before Koeman's appointment was confirmed - Bartomeu told Barcelona's website: "We already know how he thinks and his philosophy. We bet on him. He was the first one we called in January.

"It's a dream for him. As he was in Johan's 'Dream Team', he knows Barca and how we understand football."

Setien was only appointed in January but left after overseeing Barca's first season without a trophy since 2007/08.

Sporting director Eric Abidal - also a former Barcelona player - followed Setien through the exit door after leaving his role as sporting director on Tuesday. He has been replaced by his understudy, Ramon Planes.

Other contenders to replace Setien included Mauricio Pochettino, who was the preferred candidate of Planes. However, there was understood to be resistance towards the former Tottenham manager because of his links with Barca's city rivals, Espanyol, where he was both a player and a manager.

Other board members were keen on Xavi, who is currently in charge of Al Sadd in Qatar.

Speaking to Barcelona's official television station ahead of Koeman's appointment, Bartomeu warned the squad of "drastic measures" that "will affect certain players, who we should give a proper farewell to". The names of Gerard Pique and Sergio Busquets, with the first team since 2008, were conspicuous by their absence, as were Jordi Alba, Ivan Rakitic and Luis Suarez.

Bartomeu went on to say: "These are players who have given their best days to the club and been part of the club's best years. They have won a lot of trophies and had a lot of success.

"Some of those decisions have already been taken by others and some will be taken soon by different people. The players will not be consulted on these decisions.

"It's very important to listen to opinions but the coach and technical secretary will take the decision together."

Bartomeu added Barcelona are still trying to sign Lautaro Martinez from Inter Milan but admitted re-signing Neymar will be "impossible" as Paris Saint-Germain do not want to sell him.

In the wake of the heavy defeat to Bayern, there was speculation that Lionel Messi might end his long stint with the club, but Koeman wants the Argentinian to stay.

Bartomeu said: "I have spoken with Koeman and the pillar of our project is Messi. He has a contract until 2021.

"I speak a lot with Leo and more regularly with his father.

"He is No 1 in the world. There is no doubt that in Koeman's new project you can count on Messi."

Former Liverpool midfielder Philippe Coutinho has spent the season on loan from Barca at Bayern Munich - and came off the bench to score twice against his parent club on Friday.

The Brazil international has been linked with a possible return to the Premier League but Bartomeu says his Barca stint is not necessarily over. 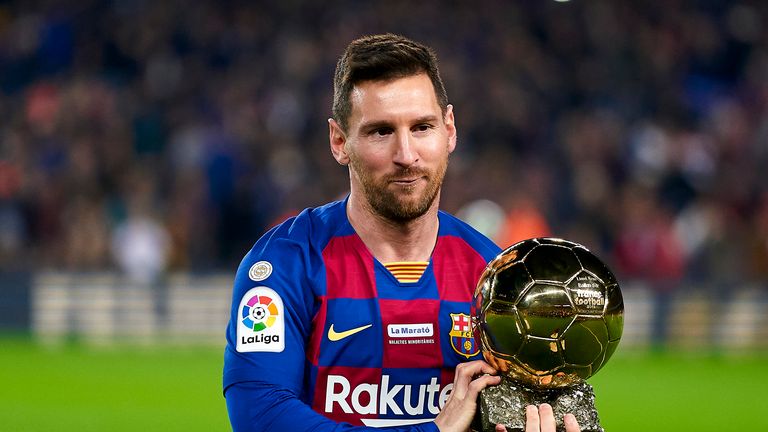 "The head coach will make the decision," said Bartomeu. "If he wants him to continue, next year he will play with us."

Barcelona have also brought forward the date of the next presidential elections, which will take place on the first matchday after March 15, 2021.

Elections have normally taken place in the summer, usually in June, but they have resisted calls for an immediate ballot to be held, saying it is "not feasible".

"After considering all options, the board consider this to be the most viable date for the aforementioned elections," a statement read.

"The board understand that an immediate call for elections is not feasible, given that the league season will begin on the weekend of September 12, 2020, and the situation arising from the COVID-19 crisis - both economically and socially.

"Consequently, the club will continue to implement the plan to reverse the sporting and economic situation, based on profound changes to the first team, plus a redefined budget to deal with the new situation caused by COVID-19, before the end of the current mandate."

Pique: The club needs change, nobody is safe

Gerard Pique called for wholesale changes at the Nou Camp following Friday's humiliation against Bayern Munich in the Champions League, even suggesting his own departure to help the club rebuild.

"We can't compete like that, you can't play like that in Europe. It is not the first time, the second time or the third time, it's very tough. I hope it is useful for something," Pique told the club's website after the defeat.

"Now everyone has to have a good look at themselves, the club needs change and I am not talking about the coach or the players. I am not pointing the finger at anyone.

'Xavi will arrive in a year'

"The elections are really prominent now in what happens at Barcelona. Nobody is happy with the current board of people who run it, particularly Josep Bartomeu, the president. He will be voted out. He cannot stay any longer anyway.

"That is the reason why Xavi turned the job down. Xavi is going to be on the ticket of one of the new campaigners to become the president. Therefore, Xavi does not want to go in for a year with this president and not too many other managers want to go in knowing that in a year's time a new president is going to be announced and when that new president makes his campaign, they will all have their managers that they are putting on the ticket. Xavi - if he backs one - that person will probably win.

"In a year's time Xavi is going to be the manager of Barcelona."

"Barcelona have to make some changes. Their squad is not big enough. In the second half of the season it was down to 19 senior players. They have struggled to fill the bench in La Liga games with the allowed amount of substitutions.

"The last La Liga game of the season, they had five subs on the bench and two of them were goalkeepers. Three players got injured and were replaced and the next outfield player to come on as a sub was going to be (Marc-Andre) Ter Stegen.

"That's how short of numbers they were. They had suspensions, injuries and the B team had a play-off match coming up. There's no way Barcelona should be going into games with only three outfield substitutes.

"They need bodies. They've suffered with the fact (Ousmane) Dembele and (Samuel) Umtiti haven't played enough football for Barcelona this season. Riqui Puig and Ansu Fati have bolstered the squad and that's been a big plus - in this time of need, two young players have risen through the ranks and shown their worth."