Joan Laporta elected Barcelona president for second time; 58-year-old wins with more than 54 per cent of vote; Laporta to hold role until 2026; Victor Font recorded just short of 30 per cent of vote while Toni Freixa earned just over eight per cent

Joan Laporta has won the Barcelona presidential election by a landslide.

Laporta was previously president during one of the club's most successful periods; earning 12 trophies between 2003 and 2010 including a famous treble under Pep Guardiola and with Lionel Messi as talisman.

Keeping the Argentina star will be his biggest and immediate priority, with Messi's contract expiring in the summer and the player unsure whether he wants to finish his career at his boyhood club.

Messi - a target for Manchester City and Paris Saint-Germain - will take Laporta's plans into consideration before making a decision on his future this summer, but the team are behind Atletico Madrid in the title race and look sure to be knocked out of the Champions League by Paris Saint-Germain, down 4-1 from their last-16 first leg. 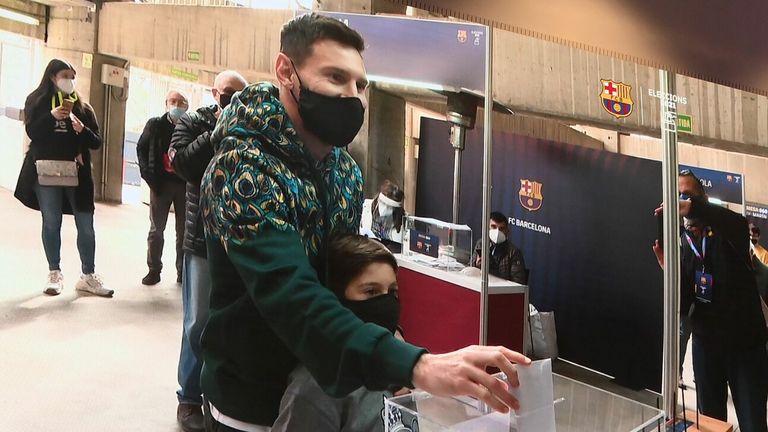 Lionel Messi arrived with his son as he cast his vote in the Barcelona presidential election (Pictures: Barca TV)

Messi was pictured casting his vote at the Nou Camp earlier on Sunday as well as first-team players Sergio Busquets, Sergi Roberto and Jordi Alba. Former president Josep Maria Bartomeu, who was was among four ex-Barcelona officials arrested in a corruption probe by Catalan police, also cast his at the stadium - one of four locations.

Bartomeu kept a low profile, having spent the night at a Catalan police station last weekend, after being detained along with current chief executive Oscar Grau, director of legal services Gomez Ponti, and advisor to the president Jaume Masferrer.

Despite the scandal, Barca were determined to present the vote as a positive occasion, hailing their democratic history and following strict coronavirus measures, having postponed the vote from January 24.

By the opening of voting at 9am on Sunday, more than 20,000 of the 110,290 members had cast theirs by postal ballot. As well as the Nou Camp, there were voting stations set up in Girona, Lleida, Tarragona, Tortosa and Andorra.

Who is Joan Laporta and what has he promised?

Joan Laporta was previously the Barcelona president from 2003 to 2010.

This was one of the club's most successful periods in which they clinched 12 major trophies, including their first treble under Pep Guardiola in 2009.

For this reason, he is popular with a large part of the fan base.

Laporta has declared he has the best chance of keeping Lionel Messi at the club out of all the candidates.

He said early in his candidacy that he will "do everything to ensure Messi continues" with Barcelona beyond the end of his contract this summer.

He has also pledged to make La Masia - the club's academy - the focus again and the main source of players for the first team.

"What can guarantee the club's future is La Masia: we'll present a project with a new methodology to make La Masia a centre of excellence central to our focus," he has said.