Aguero's former Man City team-mate Samir Nasri says the forward confirmed to him he is to retire but Xavi says the situation remains unclear; the Barca striker was diagnosed with an arrhythmia and ruled out for three months after suffering chest pains during a La Liga game last month 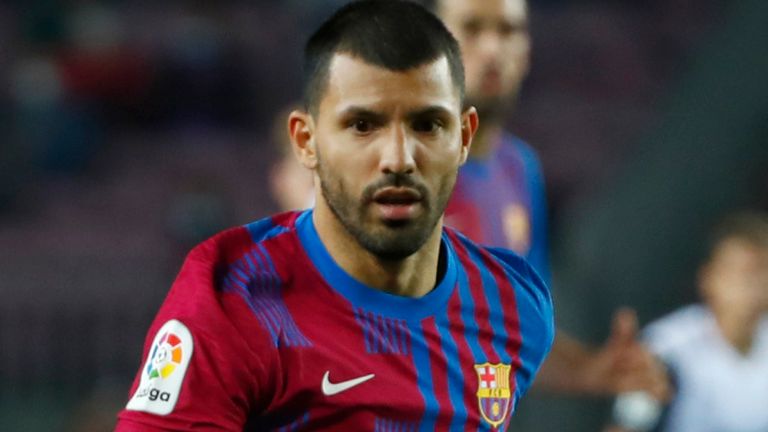 Xavi has spoken out over speculation Sergio Aguero is set to retire because of heart problems, indicating the Barcelona forward's situation remains uncertain.

Reports in Catalan media on Saturday stated Aguero, 33, is expected to call time on his playing career due to recent heart trouble.

He was taken to hospital after Barcelona's 1-1 draw with Alaves at the end of October when he experienced chest pains and breathing difficulties during the game.

The Argentine was subsequently ruled out of action for three months following a cardiac arrhythmia (irregular heartbeat) diagnosis.

After overseeing his first game as Barca manager, a 1-0 win over Espanyol, Xavi said: "About Kun Aguero I don't know anything. I spoke to him the other day and what came out is not certain.

"We don't have this information. We are in touch with him and we will follow the evolution of what he had and hopefully he can keep playing football.

"This is the information I have. I don't know where it came from [the news about Aguero's retirement]."

Xavi's comments came shortly after Aguero's former Manchester City team-mate Samir Nasri claimed the striker is set to hang up his boots as a result of his ongoing health issue.

Speaking to Canal+, Nasri said: "He just sent me a message and unfortunately it's confirmed. I have a lot of trouble because besides having been the player that everyone knows, he is a very good guy. I have great pain because it is not a choice, it is forced."

Responding to rumours earlier this month he was considering retirement, Aguero took to social media to say he was feeling "positive" and making "progress" with his health.

He tweeted: "Amid the rumours, I'm telling you that I'm following the indications of the club's doctors, undergoing tests and treatment and seeing my progress within 90 days. Always positive!"

Aguero, Manchester City's record goalscorer, left the Etihad Stadium to move to the Nou Camp in the summer on a free transfer and has scored once in five appearances for the club.

Stay strong my brother @aguerosergiokun, we’re all with you. Get well soon 💙 pic.twitter.com/bjKztuzWTA

A number of his former colleagues including Pep Guardiola and Raheem Sterling wished him a speedy recovery after news of his heart issue was confirmed by Barca.

Guardiola said: "We wish him well from all the people here at Manchester City, we wish him a safe recovery. The time doesn't matter. Health and life are much more important than anything else.

Why choose Dinamo Zagreb over Barcelona?

Dani Olmo's decision to leave Barcelona for Dinamo Zagreb did not come out of the blue. We go inside the story of Dinamo's academy to find out more...

"We wish him as speedy and safe recovery as possible and he comes back, if possible, to play again, otherwise to enjoy his life and what he has done, and to be careful and be safe for the rest of his life."

On Tuesday, Argentina's players unfurled a banner that read "We are all with you Kun" before their 0-0 draw with Brazil in World Cup Qualifying.