Gareth Southgate: England's win over Belgium a big moment for us

Southgate also praises performances of Kieran Trippier and Mason Mount: "These are games of concentration and games of detail, and for our guys to come through that was a big moment for them." 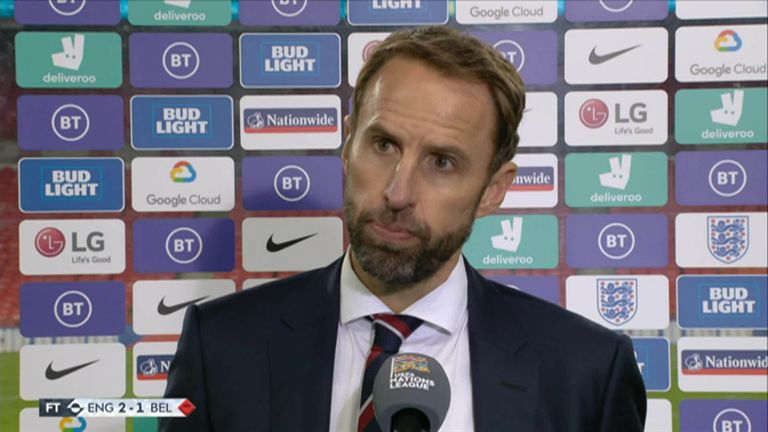 Gareth Southgate lauded England's victory over Belgium as a big moment for his side following an impressive second half against the world's top-ranked team.

After a concerning first half, England tightened up and looked assured as Mason Mount's deflected winner put England top of their UEFA Nations League group, and gave them their first win over major opposition since beating Croatia in November 2018.

Southgate, who has been criticised in some quarters for a conservative selection and approach, picked three traditional right-backs across his five-man defence on Sunday, but eventually prospered as Kieran Trippier and Kyle Walker impressed.

Speaking to Sky Sports after the game, Southgate said the victory was an important moment for his side, and insists he wants England to aspire to get to a similar level to world No 1 Belgium.

"They're a top side. For sure they caused us problems and we didn't retain the ball well up; we were a bit slow to move it up the pitch," Southgate said.

"But it was a top-level game. We had a lot of young players there, [Declan] Rice, Mount, Trent [Alexander-Arnold], for whom it was a great experience. What pleased me was we had the resilience to see that spell through. Then you get your opportunities and the game starts to open up.

"In the second half, you have to be perfect against these teams without the ball, and bar the one brilliant pass from [Kevin] De Bruyne, we were so compact, our covering positions were good. Trippier was like a soldier out there; unbelievable defensive performance.

"But right through the team in that second half, you have to suffer to win these big games, and they did that.

"We've got loads we can get better at. We're not carried away by this win, we've got to back it up against Denmark first and foremost. We know the quality of Belgium today is the level we have to aspire to on a regular basis.

"These are games of concentration and games of detail, and for our guys to come through that was a big moment for them."

Southgate has also previously been criticised for not selecting Jack Grealish, and after his impressive performance in the 3-0 win over Wales the Aston Villa man was on the bench on Sunday as Chelsea's Mount came in.

But Southgate's selection was justified by Mount's matchwinner and performance, and after the game, Southgate said a big part of England's success in the second half came through Mount and fellow goalscorer Marcus Rashford's pressing.

"You're trying to help the players to understand the problems that the opposition movement is causing. That was clear to us, but the players then have to solve it, and they did. Rashford and Mount's pressing was phenomenal.

"You can't just play with the ball - we can be a free-flowing, free-scoring team - but against the best the detail of how you defend as a team has to be absolutely bang on. In the second half we got that right."

Southgate then said in his post-match press conference: "I thought the players in the second half, the way they used the ball with tremendous composure. They defended as a team, and in these games you have to. It's impossible to carry anybody without the ball.

"Marcus [Rashford], Mason [Mount], Dominic [Calvert-Lewin] and then Harry [Kane], positionally close to perfect, intelligent in their pressing. They had the legs to go and press, and that means the midfield players don't gave to jump out of position. And it means we're not exposed with bodies in-between the lines.

"The whole team, I'm very proud of what they did.

"I think tonight you saw a top-level game where we used the ball well and created chances. But defensively you've got to be spot on, you can't be loose in any way and the players really took that on board."

Redknapp: Not perfect, but huge win

"It wasn't perfect in the first half, but to beat a team of Belgium's quality is exactly what you want as a team. It wasn't the perfect performance but when you look at the players we haven't got playing - you've got to bring [Ben] Chilwell back into the equation, [Harry] Kane and [Jadon] Sancho came on...

"All in all for Gareth, there will be bits he wants to tinker with but he'll be so happy with that second-half performance in what was a huge win for England. There's no downside to beating a team like Belgium, who are the No 1 side in the world right now."

England continue their Nations League campaign with another Group A2 game at home to Denmark, live on Sky Sports Premier League HD from 7pm on Wednesday, with kick-off at 7.45pm. Belgium, meanwhile, are away to Iceland, with kick-off also at 7.45pm on Wednesday. You can watch that game live on the red button.