Chelsea's Conor Gallagher has scored four goals in 10 Premier League games on loan at Crystal Palace this season; the 21-year-old could make his England debut in the World Cup qualifier against San Marino on Monday; Raheem Sterling, Jack Grealish and Jordan Henderson have left the squad 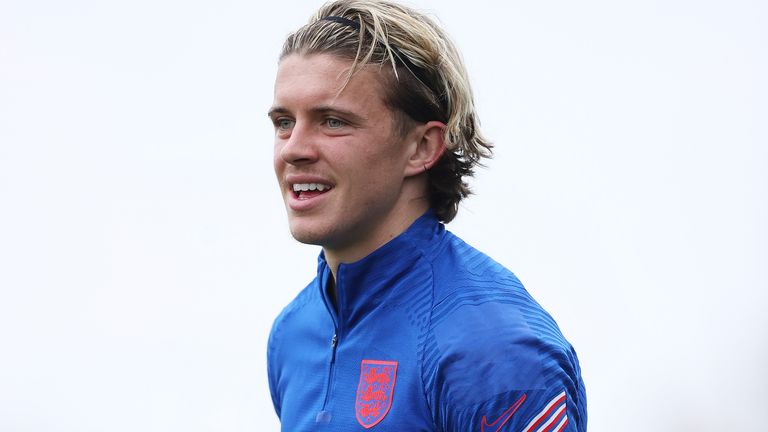 England manager Gareth Southgate says he and his staff have been tracking the progress of Crystal Palace midfielder Conor Gallagher through a string of loan moves.

Crystal Palace loanee Conor Gallagher has been called up to the England senior squad for the first time, after Gareth Southgate confirmed Jordan Henderson and Jack Grealish have withdrawn due to "small injuries".

The 21-year-old midfielder, who is on loan at Selhurst Park from Chelsea, has been rewarded by England manager Southgate after scoring four goals and adding two assists for Palace this season.

Gallagher's call-up comes as Southgate deals with several absences ahead of Monday's World Cup qualifier in San Marino, a game which England need only a point from to secure their place at next year's tournament.

Henderson and Grealish have returned to Liverpool and Manchester City respectively for further assessment on injuries, while Raheem Sterling will miss the match due to a personal matter.

Southgate says he believes the injuries to Henderson and Grealish occurred during Friday's 5-0 win over Albania. Southgate has given an update on the fitness of Liverpool's Jordan Henderson and Manchester City's Jack Grealish.

"As a precaution with both we've scanned them," Southgate said. "There are small injuries on the scans, so we just hope that they're not going to miss too much football from here on.

"It shouldn't be too bad in either case but (we) just have to see how that progresses."

Mason Mount and Luke Shaw, who missed the Albania game, will no longer join up with the squad. Chelsea midfielder Mount continues to suffer ill-effects from dental surgery, while Shaw is recovering from a concussion.

Highlights of the World Cup European qualifying group I match between England and Albania.

Gallagher, who has represented England at every level from U17 upwards, featured in the U21s' European Championship qualifying victory over Czech Republic on Thursday.

"(I've) been very impressed with him," Southgate said. "We've tracked Conor for quite a long time - his loan spells at Charlton and Swansea… then at West Brom and now at Crystal Palace.

"At each loan he's done extremely well. Started the season very well with Palace and we talked about him when we named the original squad as somebody that we were keen to keep an eye on."

Gallagher is the second player to be promoted from England's U21 squad during this international break, with Arsenal midfielder Emile Smith Rowe having been given his first call up at the beginning of the week.

"It's become an even better opportunity for Emile and now for Conor," Southgate said. "They deserve that both for their club form and for the way they've played with the U21s and their professionalism.

"There's great competition for places - if they play well they have a chance to stay with us. They would need continue playing well for their club but that's the opportunity that presents itself."

England U21 boss Lee Carsley has called up Leeds forward Sam Greenwood to his squad ahead of their match with Georgia on Tuesday.

Southgate: We need help from clubs with World Cup selection

Southgate's decision to release the senior trio comes after he said on Saturday that he is hopeful of getting the full cooperation of clubs as he prepares for the challenge of picking the right squad for next year's World Cup amid significant time constraints.

The Premier League announced last week it will pause the season after the weekend of November 12-13 2022, with the World Cup in Qatar kicking off just over a week later.

Such a tight schedule presents new issues for international managers such as Southgate, who are usually able to spend plenty of time with their players before major summer tournaments.

Southgate believes the break offered to players at the end of the current season will be crucial and that it will be more difficult to pick anyone who is not fit and ready for action next winter.

"I think there's a balance there because even with the internationals in the summer, there is the opportunity for three or four weeks of rest and potentially three weeks of pre-season," he said.

"What's important is that there is a break at the end of this season.

"Next season is unique. Normally we go into tournaments picking up the pieces at the end of a season, but this will be during the season.

"The unknown is what will happen with the tight turnaround after the last league matches.

"Sometimes when you pick up any injuries before summer tournaments, you can sometimes have a few weeks to get things right.

"That won't be possible for any of the countries that qualify, so everybody is going to have to select their squad in a very short period of time. It is going to be key to get those decisions right."

Making such key decisions will be tough for Southgate, who will oversee matches in March, June and September next year ahead of selecting his squad.

That is why he admits the goodwill of clubs to provide much-needed information will be more important than ever.

"I think, without a doubt, that medically we will hope to get the help of clubs because medically you can't always get the full picture until the players are with us," he added.

"And because the turnaround is so tight, we are going to need a bit more insight.

"The other side of that is that clubs have got their own schedules to run and we never want to interfere with players when they're in that situation.

"So I'm always respectful when they're competing with their clubs to pick the right moment to speak with them and visit.

"But every club has always allowed us that opportunity and we've got to make sure we keep that as much as we can."