Max Kilman is a revelation at Wolves, from earning the trust of his team-mates to bossing Cristiano Ronaldo

After Max Kilman's strong showing in Wolves' win over Manchester United, we examine the reasons for his growing reputation, with insight from Jose Sa and Bruno Lage...

Max Kilman has been a revelation for Wolves this season. Signed from Maidenhead in 2018, the 24-year-old has been a key part of the second meanest defence in the Premier League. Even some of his team-mates did not realise that Kilman was quite this good.

Jose Sa had to confess the truth just a couple of weeks ago in a conversation with the defender. Speaking to the Wolves goalkeeper recently, he revealed the details.

"I talked with him," Sa told Sky Sports. "I said, 'Max, the first training session here, when I saw you, I said to myself that this guy cannot be a player'. In that first session, when we were defending, he did not run. I thought that was impossible. This guy doesn't run!

FREE TO WATCH: Highlights from Manchester United's defeat to Wolves

"So I told him a few weeks ago that I owed him an apology. I had to say sorry to him because after that first session all I was thinking was that he did not run and he did not tackle. I eat my words. He is amazing and doing an amazing season."

That amazing season became that bit more special on Monday evening when Kilman helped Wolves to their sixth clean sheet in eight games as they beat Manchester United at Old Trafford. The club's first win there in over 40 years. The best result of his career.

In popular parlance, Kilman pocketed Cristiano Ronaldo. The memes are doing the rounds and not without justification. It was a commanding effort, positionally astute, physically robust, but also showcasing his impressive skills with the ball at his feet.

Until recently, Kilman had been best known for the quirky tale that he is the first England futsal international to play in the Premier League. Although some of the truisms remain - the close control, his use of the ball - his skill set has moved far beyond that now. 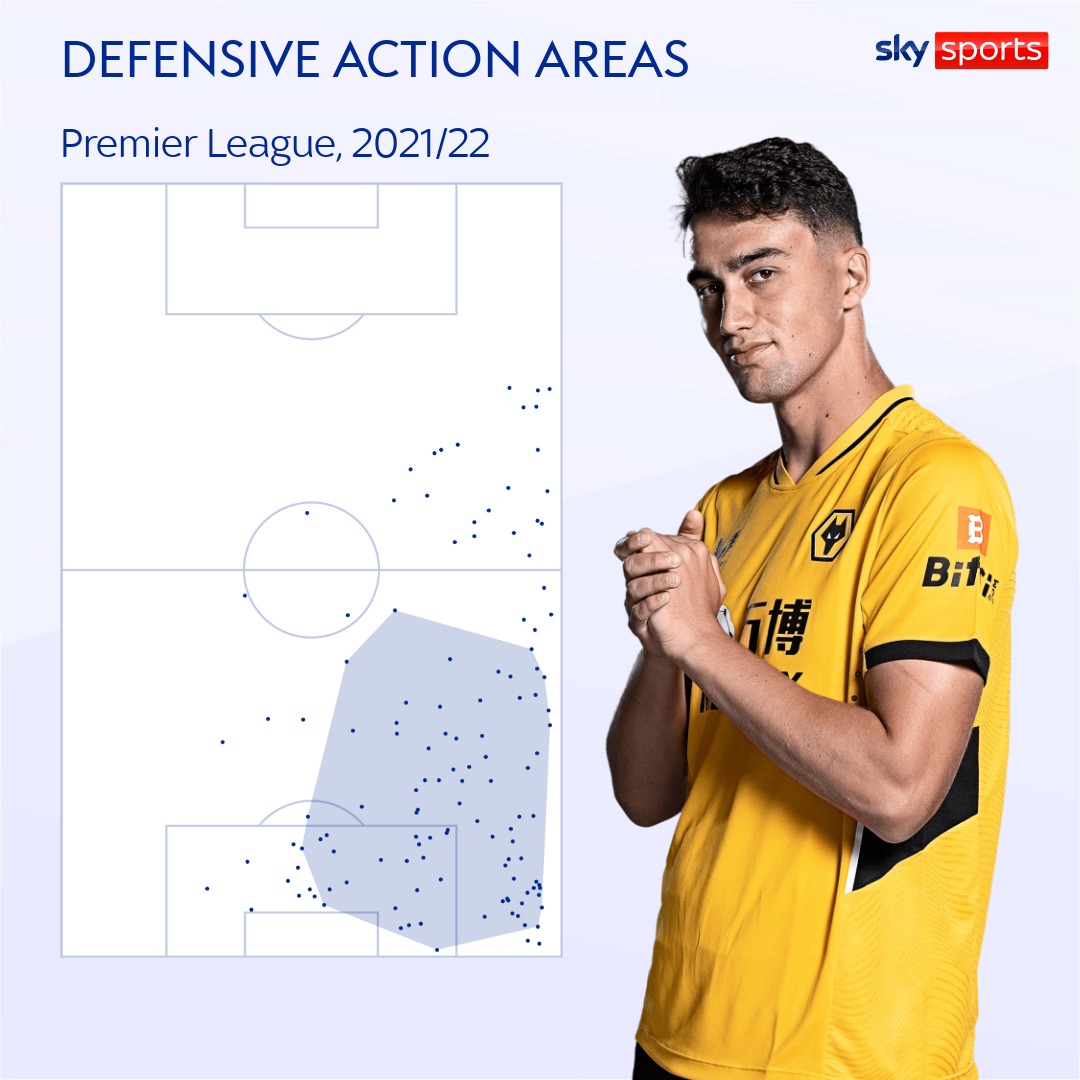 At 6'4" with a broad frame, he has the basics required to be a dominant defender as well as a technical one. As he matures, and before this ever-present season he had not started more than half a dozen consecutive league games, he is learning to use that better.

It helped him to score his first Wolves goal against Everton.

The little moments stood out at Old Trafford. The interception that dumped Ronaldo on the ground. The passage of play when, with Jadon Sancho running at him, he deftly flicked the ball past him before sauntering away apparently unconcerned.

Sa's initial assessment was understandable. Kilman has a tendency to make it all look a little easy, but then, that is what the best defenders do. He glides over the ground, rarely appears rushed. When it is over, more often than not, the opposition have not scored.

Unusually, he has found a role for himself as a left-footed defender on the right side of the defence. He is there because Romain Saiss also favours his left but just as John Terry, Virgil van Dijk and Harry Maguire made a career on the 'opposite' side, it seems to suit him.

He always has that natural pass out to Nelson Semedo on the right wing but there is the option to keep his body shape open, cut inside and switch the play. Against Manchester United, he had the best pass completion rate of any Wolves player.

There is more mobility to his game now too.

Speaking to Bruno Lage in his office back in October, he explained the plan. "Max, he is doing a good thing for us because he drives with the ball," Lage told Sky Sports. "He goes inside and when the guys come towards him he finds the spaces to go."

A progressive carry is defined as one that occurs in the opposition half and moves the ball at least five metres towards the opposition goal. Kilman has done that 150 times this season, more than any of his team-mates, just ahead of flying winger Adama Traore.

There was a driving run during the second half against Manchester United that took out three men. These are the eye-catching bits of play that are reportedly attracting the attention of the England boss Gareth Southgate. The ceiling is high for Kilman. 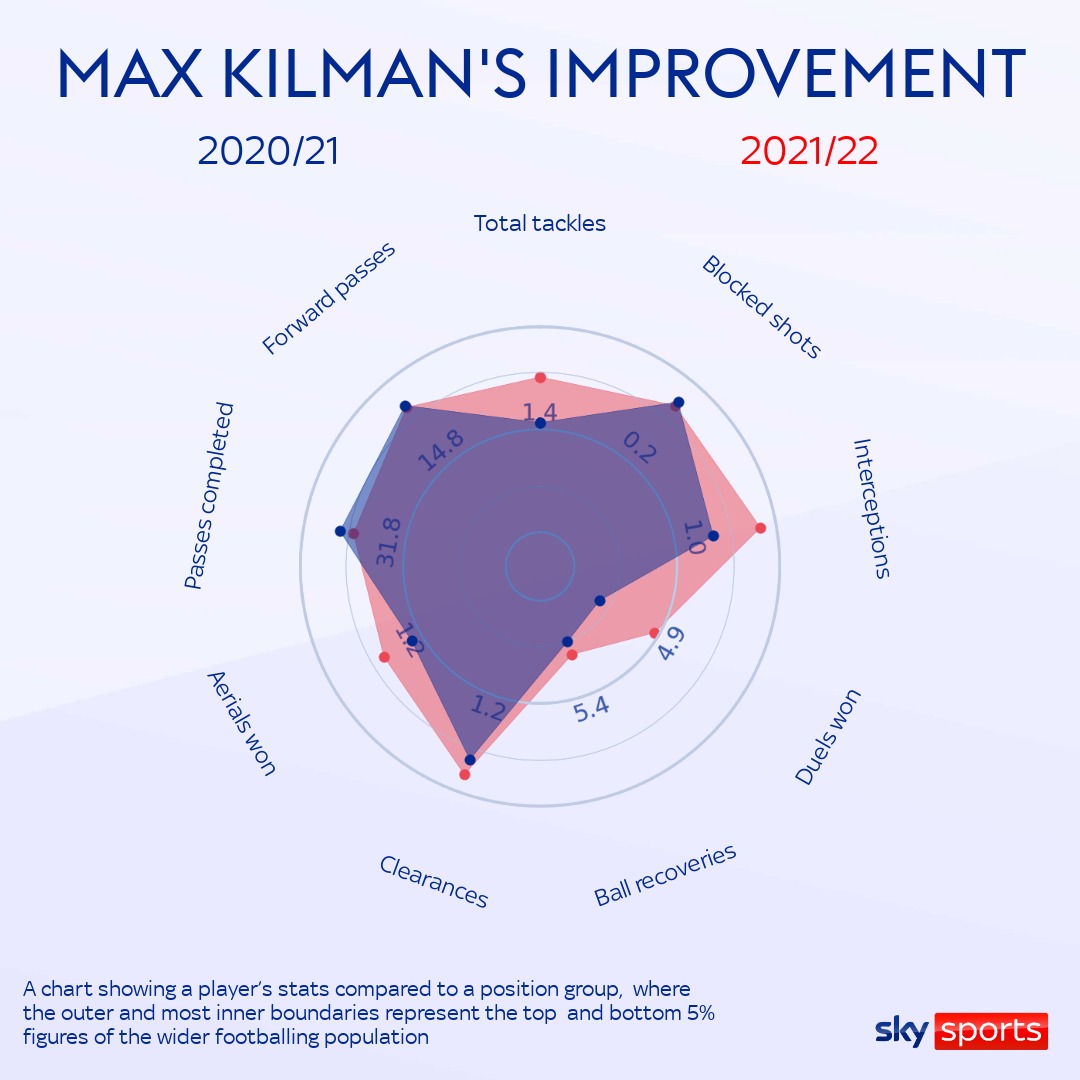 Perhaps he himself does not realise it yet. That was a question put to Lage at the club's training ground earlier this season. "I really don't know," he said. "He is just enjoying the moment. He really doesn't care if we play against Manchester United or another team.

"I see him with a big ambition every day. I really don't know if he knows that if he works hard he can arrive at a good level, because he is already at a good level.

"It is not about the names it is about the performances."

From Bruno Lage to Jose Sa, from the Wolves supporters to Gareth Southgate and the wider footballing world, the name of Max Kilman is growing in significance and stature.