Conor Gallagher is set to be a future star in English football after impressing for Charlton and Swansea during loan spells from Chelsea.

Here, Sky Sports' EFL pundits Keith Andrews and Andy Hinchcliffe assess the 20-year-old's attributes and tell us why he is such a special talent... 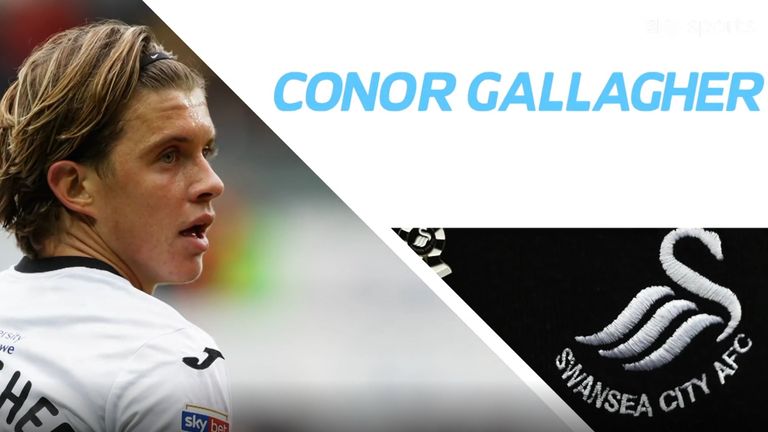 Are we looking at a player who could make it in the Chelsea first team?

I don't see any rush whatsoever in trying to get him into the Chelsea team. I think they will nurture him, I think they will use the loan market again, probably give him a longer contract, secure him long-term because if you do it again in a year's time, one or two of those centre-midfielders might have moved on and an opportunity may open up. That's assuming Lampard is still there, of course.

Hinchcliffe: Ultimately it will be about the Chelsea plan. Lampard's in there and, for the moment, youth has been given its head. You hear talk of Philippe Coutinho or more senior, experienced players going to Chelsea, but what Gallagher needs, if he's going to play for Chelsea for the next five or six years, is the opportunity.

He might get it at the moment under Lampard but as seasons go by, finances change, Coutinho comes in, his path is going to be blocked and that might be the problem. No matter how good he is, there's always going to be a more experienced player that could play in his position. He might end up, if he wants to play in the Premier League, having to leave Chelsea to go elsewhere for regular first-team football.

Will there come a time he will need to settle into just one midfield position?

Andrews: I probably do not think just yet because of how new first team football is to him. He is ahead of where he should be in his development. He has taken the Championship by storm and is now a household name at that level, so his next step is to probably nail down that position. When you can score goals like he has shown at that type of level, you have to play him further forward. When I look at what he brings to the game, his attributes, is he an out-and-out No 10? Probably not, for me, with his back to goal and playing in really tight areas. But the one thing he has got is a fantastic engine, much like Lee Bowyer or Frank Lampard - it's amazing, the resemblances between those two in their younger years particularly.

What we are seeing in glimpses from Gallagher, he has to be given the licence to get forward and he times his run into the box so well. When he gets in there, he's got that composure in front of goal. But for me, he's a classic No 8; he has an unbelievable energy, he does the ugly side of the game, but you have to let him off the leash and let him get forward.

Hinchcliffe: " would compare him to someone like Ross Barkley. I remember at Everton speaking to some of the coaches. Barkley, like Gallagher, could do a bit of everything, but the last position they wanted him in was a No 10 with his back to goal. They wanted him with grass in front of him so that he can burst forward.

You don't want him in confined areas, up against a defensive midfielder with his back to goal. You want the grass in front of him, ball at his feet, travelling with it because he's dynamic. Why would he play as a holding midfielder if he's dynamic? Probably a No 8 is his ultimate position and again, he might take two or three years to actually get there and play there regularly.

Are there any current or former players you could draw comparisons with?

Andrews: I do not think he can get too far away from the two managers that he had [at the start of the season]. Lee Bowyer, who took him, plucked him, nurtured him, gave him the opportunity and probably filled him with confidence. I would imagine he would have had a lot of one-to-ones and spoke to him about what he used to do as a player: box-to-box, arriving on the edge of the box, getting shots off, crosses, cut-backs, things like that. And of course, Frank Lampard who Gallagher grew up worshipping, so I am led to believe.

They are two names with huge boots to fill. Those are the components to his game: box-to-box, real energy, likes to get stuck in, wins the ball back but then he breaks so quickly. His engine and his speed of how he covers the grass is very impressive.

Hinchcliffe: If you look at the development in Kevin De Bruyne's game, how dynamic he is now. People probably did not really notice that about him but he's playing in one of those wide-ish midfield positions and he can get on the ball on the edge of the box, or he can travel with the ball and he can cover the ground as well. He's developed his game. If I was Gallagher, I would be looking at De Bruyne saying if I could model my game on that then I would not be far off being a top professional.

The most impressive thing with Gallagher, this is his first loan move. You are looking at attitude and application. Do you really want to be here or are we just a stepping-stone for you? And you can tell, pretty much, before they even step on the training pitch. You can tell by the way they move.