Christian Eriksen: Belgium to honour Denmark midfielder by kicking the ball out of play in Group B encounter

Gesture will occur in the 10th minute to honour the Denmark midfielder, who wears the number 10 shirt, after he suffered a cardiac arrest in the first half of his side's 1-0 defeat against Finland on Saturday evening.

Belgium will pay tribute to Christian Eriksen by kicking the ball out of play in the 10th minute of their Euro 2020 Group B encounter with Denmark on Thursday.

The midfielder, who wears the number 10 shirt, had to be resuscitated on the pitch at the Parken Stadium in Copenhagen after suffering a cardiac arrest in the first half of his side's 1-0 defeat by Finland on Saturday evening.

"Then from that point on, once you get the good news that Christian reacted positively, that he was talking, that he was in hospital, now it's almost a celebration.

"You're going to have a full capacity crowd - this is about a celebration in football and for Christian."

The Danes will head into their clash with Belgium, who beat Russia 3-0 in their opening fixture, desperate to kick-start their tournament.

Head coach Kasper Hjulmand will need to plug the gap left by Eriksen, but also ensure his players are ready to go again after being deeply affected by what they witnessed. 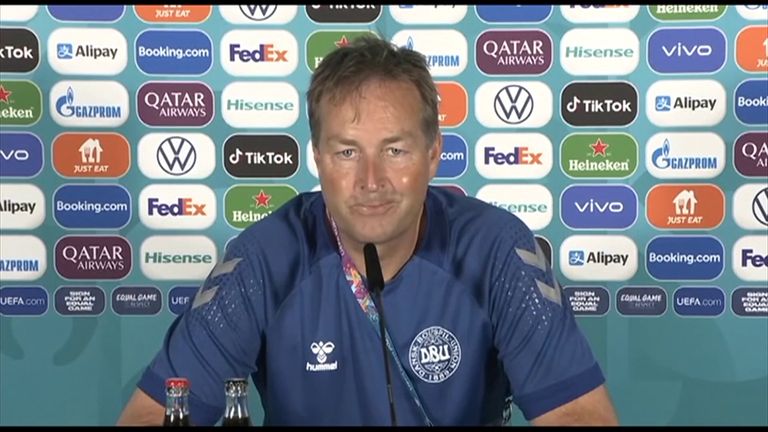 Denmark head coach Kasper Hjulmand says Christian Eriksen will be watching his team-mates when they face Belgium and will even be able to hear the stadium from the hospital. ©UEFA 2021

Hjulmand said: "We're not done with this tournament and we have some very important games ahead of us."

That said, he is aware his side will have its work cut out to get the better of FIFA's top-ranked team, who beat them home and away in the Nations League last year.

He added: "I know we're the underdogs here. There's no doubt that we are facing the best team in the world, who we have played many many times.

"You can look at their statistics and see that they don't concede many goals and they win a lot of games. They're very, very good. They're the only team that reminds me of a club team.

"But there's always a chance against that kind of team."