After writing to all 92 English league clubs in July, Chief Constable Mark Roberts, the National Police Chiefs Council's football lead, has been left disappointed by the commitment from many

Just three Premier League clubs have said they are willing to work directly with the police to help their players deal with online racist abuse.

Football clubs at all levels have taken a firm stance on tackling online hatred targeted at players, which has surged since the Euro 2020 final.

However, after writing to all 92 league clubs in July, Chief Constable Mark Roberts, the National Police Chiefs Council's football lead, has been left disappointed by the commitment from many clubs.

"Only 49 have come back with a positive response to saying they wish to engage… so far only eight clubs have facilitated us getting the officers, PFA and Kick It Out in to speak to the players," he told Sky News. 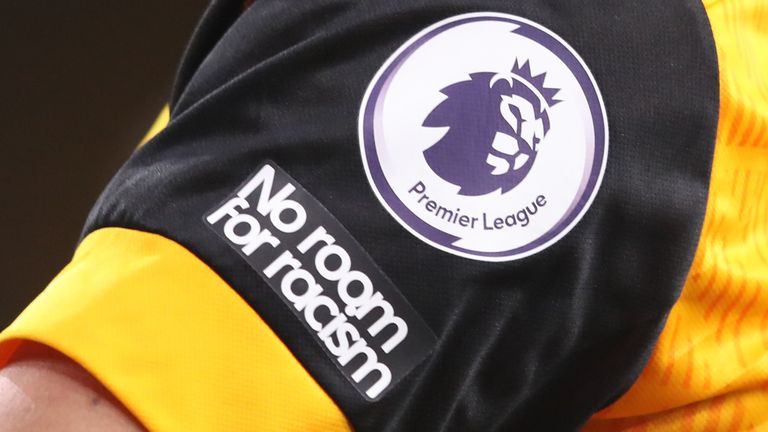 Chief Constable Mark Roberts has called on the Premier League to take more action in the fight against online abuse. The Premier League have dedicated the next two rounds of fixtures to the No Room For Racism campaign.

None of those visits have yet taken place at Premier League clubs - but three of the 20 teams in the top flight have said they will engage with police.

Mr Roberts told Sky News he didn't want to name and shame individual clubs, but that collectively he expects them to up their game and facilitate visits from officers as soon as possible.

"We hear all the slogans, we hear all the commitment," Mr Roberts said. "But when we try and take some positive steps to support players, support the clubs, we need a bit more than words sometimes.

"If people know the options in advance and what support is open to them, then there's a better chance of them knowing what to do and taking positive action."

In his letter sent during the summer, Mr Roberts pointed out to clubs that players need better support if they are to take action when they are sent online abuse.

He also acknowledged that social media companies have significantly improved the way they respond to reports of racist posts.

Last year, investigators were typically waiting for six months for evidence from the tech giants once a report was made - now it is a matter of a few days.

Mr Roberts said British policing was fully committed to finding and putting offenders before the courts.

Mr Roberts said: "We want to do this, but I think this is one of those examples where everyone says they are committed, says they want to tackle it, but then we give opportunities [and] it doesn't happen.

"That's a really disappointing take-up, and I think, candidly, the numbers speak for themselves."

In response, the Premier League told Sky News that they always encourage clubs to work with the police.

A spokesperson said: "The Premier League is taking action against online abuse - since 2019 we have been proactively monitoring social media platforms to report any abuse targeted at Premier League players, and have reported thousands of incidents to social media companies since.

"We also support players, managers and their families through our online abuse reporting system, working closely with the relevant police authorities throughout this process."