Arsenal Women vs Chelsea Women: How will the two sides match-up tactically in the Women's FA Cup final?

Arsenal Women have won the Women's FA Cup a record 14 times; Chelsea Women are aiming for their third title; follow Arsenal vs Chelsea with our dedicated live blog across Sky Sports' digital platforms and on Sky Sports News on Sunday; kick-off 2pm

By Adam Smith and Charlotte Marsh

The Women's FA Cup final on Sunday sees Arsenal Women and Chelsea Women go head-to-head for the coveted trophy, but how do they match-up tactically ahead of the Wembley showdown?

The 2020/21 FA Cup final was postponed from the end of last season after Covid-19 restrictions delayed the second round proper from being played.

Both Arsenal and Chelsea entered the competition in the fourth round. The Gunners picked up two huge early wins against Gillingham and Crystal Palace, which were played under former manager Joe Montemurro.

New coach Jonas Eidevall oversaw a quarter-final victory in his first North London derby against Tottenham - winning 5-1 - before his side saw off Brighton in the final four to set up a showdown with Chelsea.

Emma Hayes' side are yet to concede a goal in the FA Cup, beating London City Lionesses and Everton at the end of last season - the latter coming after their Champions League defeat to Barcelona. They then beat Birmingham 4-0 in the quarter-finals before sweeping past Manchester City in their semi-final match-up.

In the tactics dossier we reveal:

Eidevall has set up using a 4-3-3, with his full-backs pushing further forward while the remainder of his team stays rather narrow. He's set up with a hard-to-beat defensive midfield unit, including Lia Walti, Kim Little and Frida Maanum.

Katie McCabe and Beth Mead have shone for the Gunners this season and on average, stick quite tight to Vivianne Miedema in the middle. 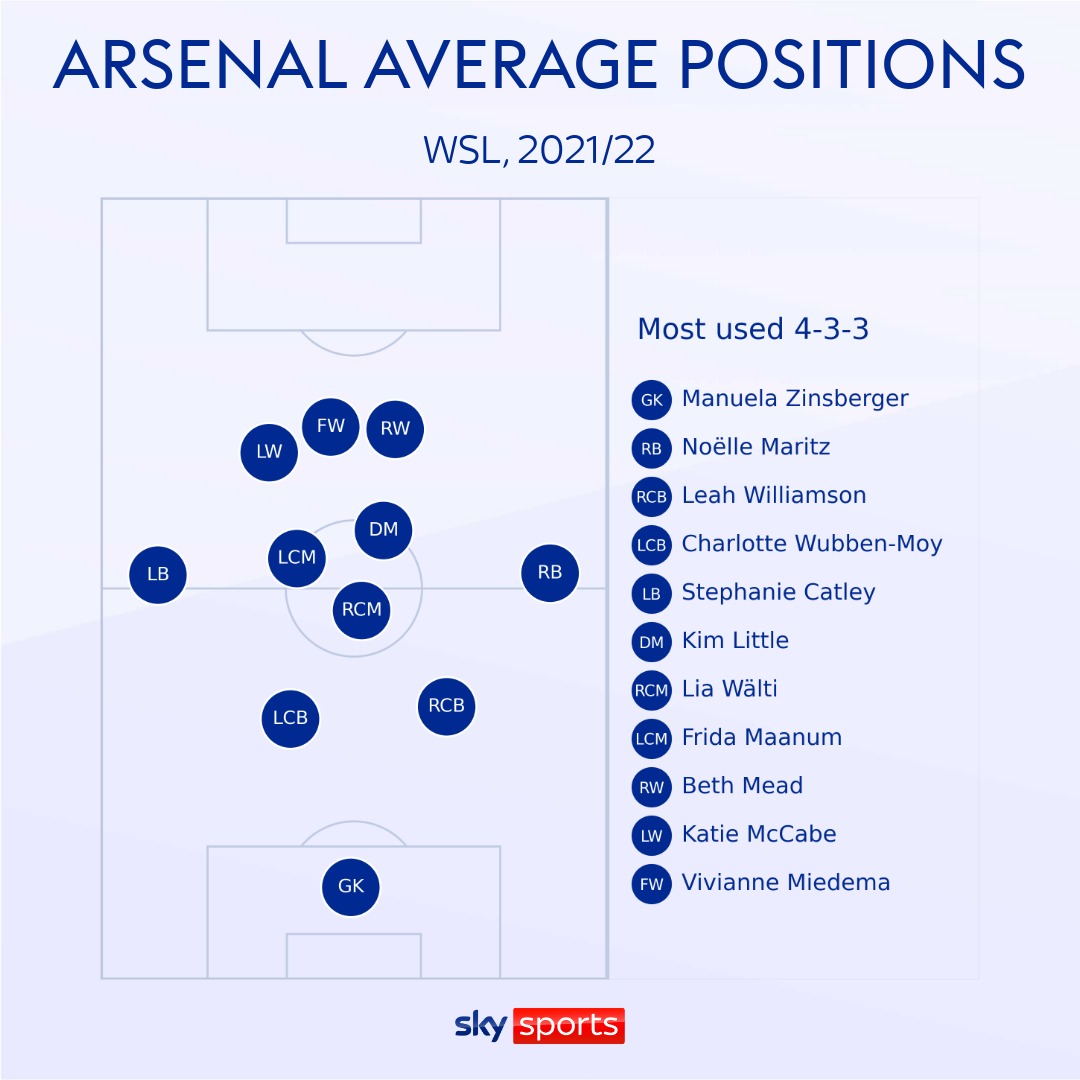 Chelsea set up slightly differently, using a 3-4-3, deploying Guro Reiten and Erin Cuthbert as wing-backs. Up front, Sam Kerr is used mostly through the middle on average, with Pernille Harder on the left and Fran Kirby on the right. 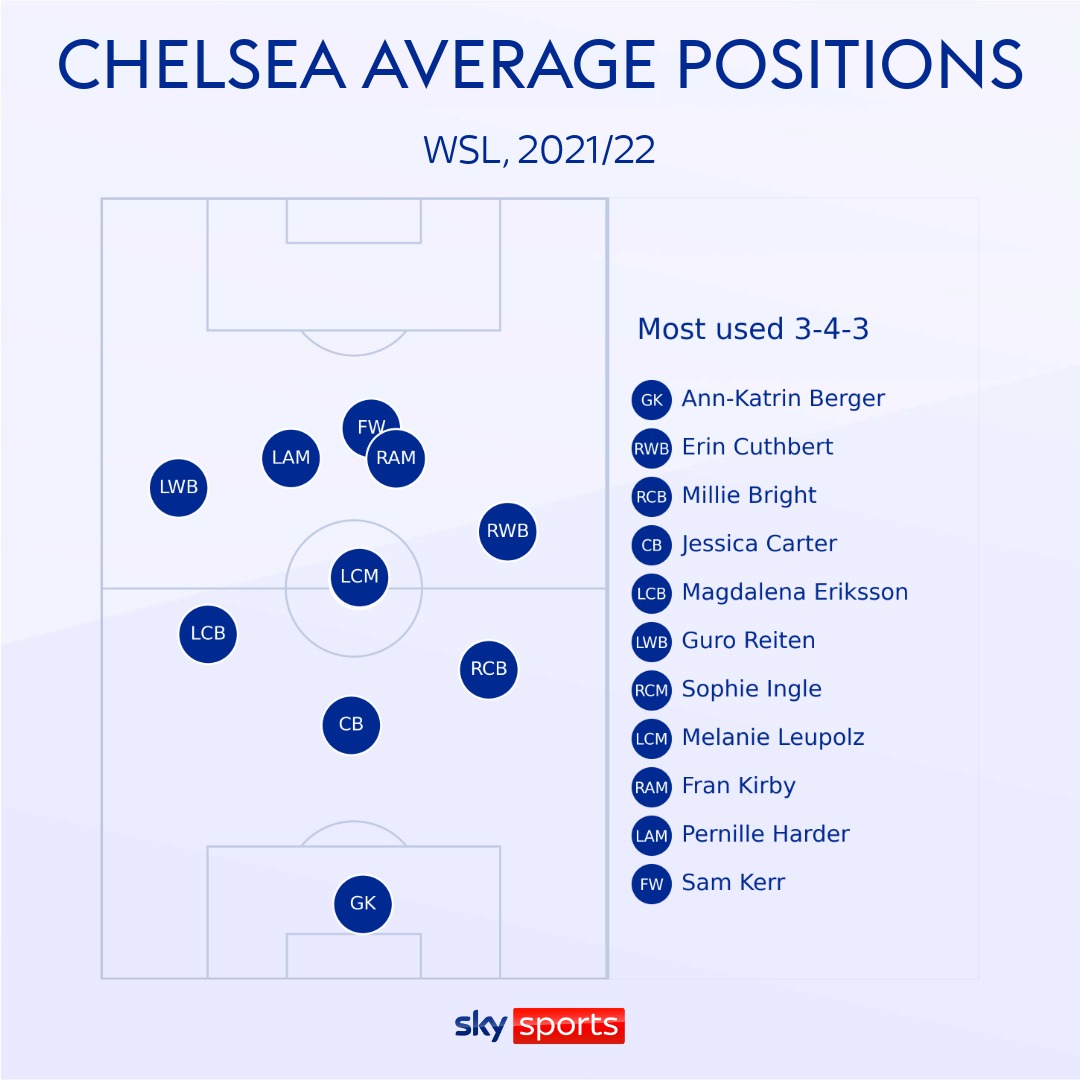 Neither Arsenal or Chelsea lack in attacking talent - Kerr and Miedema were recently third and fourth runners-up for the Women's Ballon d'Or - so it's no surprise that just one goal separates the sides. Interestingly though, Chelsea's xG is far higher than Arsenal - 19.4 compared to 13.4.

And while Arsenal have created significantly fewer chances from set plays (9), compared to Chelsea's 18, they lead the way for assists from set-plays (4).

There is also a marked difference in where both sides have scored their WSL goals from this season. Arsenal have scored far more goals from outside the box (5), with only one coming from inside the six-yard box.

Alternatively, Chelsea have scored just twice from outside the area, but show a greater instinct for poaching near the goal line - five of their goals so far have come from inside the six-yard box.

Unsurprisingly, this is also reflected in where both teams' chances have been created from. Arsenal have sent more balls forward from a far greater distance that have led to chances, while Chelsea create theirs far closer to the 18-yard box.

But both sides are very similar in terms of their attacking thirds, both using the wings to full effect. Arsenal's percentages are slightly higher for both wings, with Chelsea having a higher percentage through the middle. However, Emma Hayes' side still use the wings for the majority of their attacking play.

As it stands, Kerr (9) leads the way for goals, with Kirby, Miedema and Arsenal captain Kim Little not too far behind with six. Amazingly, Kerr has created 16 chances, a metric in which Mead (25) leads the way while also recording four goals and as many assists.

It shouldn't come as a shock given her superb form for Arsenal this season, with McCabe and Kirby also creating 22 chances apiece.

Both teams average over 55 per cent possession, with Chelsea averaging an impressing 61.2 per cent in each game. Not surprisingly, given both sides lead the WSL for goals, they also have the highest number of passes ending in the final third.

Arsenal have also played the second-highest number of long passes in the league - correlating with their chances created map above. Both are ranked as the top two for build-up attacks.

Looking at the passing networks, both sides have similar passing patterns, playing out from the back and down the wings. Of course, using a 3-4-3, Chelsea have an extra option in the middle to help with distribution.

This is evident, too, if we look deeper into passes by zone. Chelsea have more passes in their central defensive zone compared to Arsenal, with both sides utilising their talent on the wings to move forward.

Looking at the individual passing stats, Chelsea's three centre-backs have perfected passing out from the back - Millie Bright, Magdalena Eriksson and Jess Carter all rank at the top for completed passes.

However, it's McCabe who tops the charts for crosses and corners as well as passes into the opposition box, assisting a joint-high five times in the WSL this season. She will be a key threat for Arsenal on Sunday.

It's no surprise to see both teams leading the way in the pressing statistics. Arsenal and Chelsea are in the top two for possession won in the attacking third, high turnovers and shot-ending turnovers. They have both scored four goals from high turnovers too.

They also rank lower for possession won in the midfield and defensive thirds - considering how much possession they average per game and their other possession stats, this shows clear correlation.

They do differ in the zones the ball recoveries come from. Arsenal's occur further back and with regularity down each wing. The majority for Chelsea come on the right wing, although there is a medium spread in other areas.

In contrast to the Gunners, they have more recoveries in a centre midfield position, while that is one of their opponents' weaker positions.

Unsurprisingly, neither side has any red areas of low solidity. However, Chelsea are high all across the pitch while Arsenal have softer spots further back, looking stronger in in their attacking midfield and forward positions.

As already discovered, both sides win the majority of their possession in the attacking third, and Arsenal's Mead leads the way in this category. Kirby is not far behind either.

Carter is the most effective in winning possession in the defensive third, but it's Gunners captain Little who is the most impressive. She is well ahead for possession won in the midfield third, also ranking in the top four for the other two categories.

Arsenal's midfield has been one of their strengths, with Walti and Maanum also ranking in the top five for possession won in the midfield third. That will be a formidable challenge for Chelsea on Sunday.

What about the defence?

Arsenal have conceded the fewest WSL goals this season, closely followed by Chelsea. The Gunners have also kept one more clean sheet than their weekend opponents.

But Hayes' side rank bottom of the WSL for shots faced and shots on target faced, with Arsenal ranking in the bottom three in both categories.

Both teams face their biggest threats down the wings. Arsenal's main area of concern comes down the left wing, but less so down the right. Chelsea, meanwhile, face an almost even threat down both flanks, but less through the middle.

While there are not too many WSL goals to analyse, neither side have conceded goals from outside the 18-yard box this season. However, Chelsea are yet to let a goal in from inside the six-yard area, while two of Arsenal's conceded goals have come on the edge or inside the same zone.

Looking at the Sky Sports Power Rankings, Kerr and Kirby top the table in both season and current form.

Based on the current form, the Chelsea forwards are followed by four Arsenal players, with Mead also among the players high on the list for overall form this season.

Taking a closer look at the two star strikers for Arsenal and Chelsea, they do operate in slightly different areas. Miedema plays more to the left, while Kerr is further over on the right. The Chelsea forward also has a clear spot in the middle of the box, while Miedema has a more fluid heatmap.

There are plenty of similarities between Arsenal and Chelsea. They are both matched across a number of areas, including goals scored and conceded, the use of the wings and how they use possession.

But there will be key areas of strength that could contribute to the small margins that are likely to decide this game. They score goals from different areas and create differently too. While Chelsea's back three have perfected playing out from the back, Arsenal have talented individuals such as Katie McCabe and Kim Little who top plenty of categories.

One thing is for sure - the stats and tactics make for engrossing reading and a mouth-watering Wembley showpiece. The manager who can prepare and adapt the better will likely come out on top on Sunday.