Koke expressed pride in Atletico after they exited Champions League with 0-0 draw at home to Man City; game ended in chaos after Felipe red card and brawl between players in tunnel; Diego Simeone said his side had been praised with "disdain"; Pep Guardiola distanced himself from criticism

Atletico Madrid captain Koke defended his side's ill-tempered antics during their Champions League exit to Manchester City - though did hit out at alleged time-wasting from Pep Guardiola's side.

City progressed through to the Champions League semi-finals thanks to a 0-0 second-leg draw at the Wanda Metropolitano - to go through 1-0 on aggregate - in a resolute defensive display despite chaos emerging at the end of the tie.

At the start of nine additional minutes of second-half stoppage time, both sets of players were involved in a mass scuffle after Felipe fouled Phil Foden near the byline. Stefan Savic tried to pick the injured Foden up off the floor, which caused the scuffle, while the ex-City defender was also seen trying to headbutt Raheem Sterling and pulled Jack Grealish's hair.

Felipe, meanwhile, was shown a second yellow card for his tackle on Foden and role in the scuffle, but midfielder Koke claims City's time-wasting antics allowed Atleti players to become frustrated.

"The match takes you to that madness when you see that you have chances and they drop to the ground and waste time," the Atleti captain said in a post-match interview.

"Many times we are criticised for this situation, but today it was them. Let's see what people think of this. Today it has been seen, we are Atletico de Madrid and I am proud of this team.

"I'm proud of my team-mates for the effort. I have nothing to reproach the team with. I'm proud of everyone and the fans, who have lost, stayed to applaud us after the game. This is Atletico."

Video footage from after the game showed that the brawl continued into the tunnel, with Grealish and Savic continuing their feud while both were held back by club staff at opposite ends of the area.

Unused substitute Sime Vrsaljko, meanwhile, was seen throwing a bottle in the direction of Aymeric Laporte, with the Atleti man having to be held back from Kyle Walker in the tunnel as well.

UEFA says it will wait to receive reports from the referee and match delegate before deciding whether to open disciplinary proceedings.

Asking for his views on the incident, Atleti boss Diego Simeone said: "I didn't see it. I stayed on the pitch applauding the fans and saying hi to everyone on the pitch. So by the time I went upstairs everyone had gone."

Stones: Proud we kept our temper

Manchester City defender John Stones, meanwhile, admitted the mass brawl at the end of the game is "not nice to talk about" but hailed his side's reaction to Atleti's actions.

"We know they sometimes try and make things happen like that and I think we dealt with it really well," said Stones after the match. "It's not nice to talk about that. I don't want to dwell on that because over two legs we played incredible against such an experienced team in what they do.

"I'm so proud of the lads of how we controlled our tempers. It's so easy to get drawn into stuff like that. So happy to be through and a great night.

"We definitely knew it's not an easy place to come. It's my first time here and it's a hostile environment. It was a difficult night all round but how we defended and how we controlled ourselves was incredible."

Stones also addressed claims that Foden, who was the victim for both of Felipe's yellow card offences, was targeted by Atleti's players - but could only praise the young England international for his efforts over the two legs.

"[They started] early doors," said Stones about Atleti's treatment of Foden. "Phil was such a threat in both games, especially when he came on in the first time, an instant impact.

"Then in this game, he drove us up the pitch and gained us yards. He was outstanding, he's feeling it after the game now."

Pep: Atletico can play how they want | Simeone: Some praise us with disdain 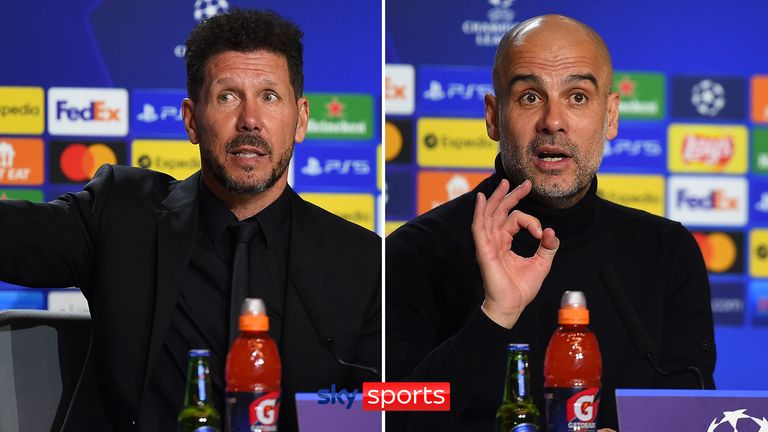 Pep Guardiola refused to criticise Atletico's approach after the game, and instead insisted that he was consistently positive about Simeone's tactics and that the former Argentina midfielder could set up his team in whichever way he liked.

Responding to Spanish reporters, the Man City manager said: "It was you who said that Simeone's cycle was always the same, it was you, three or four months ago. This is what you were saying when they were not winning matches. It was you, don't put it on me.

"I always said good things about the club and the team. El Cholo (Diego Simeone) can play the way he wants, nothing else."

Speaking after his side's exit, Simeone said he felt people had praised the style of Atletico - who are the reigning Spanish champions - with "disdain".

"I have no reason to comment about whether somebody says good or bad things," said Simeone. "Often those who have a wide vocabulary are very smart and they can praise you with disdain.

"But those of us who maybe don't have as much vocabulary, we are not stupid either."

'Much for UEFA to consider after players clash in tunnel' 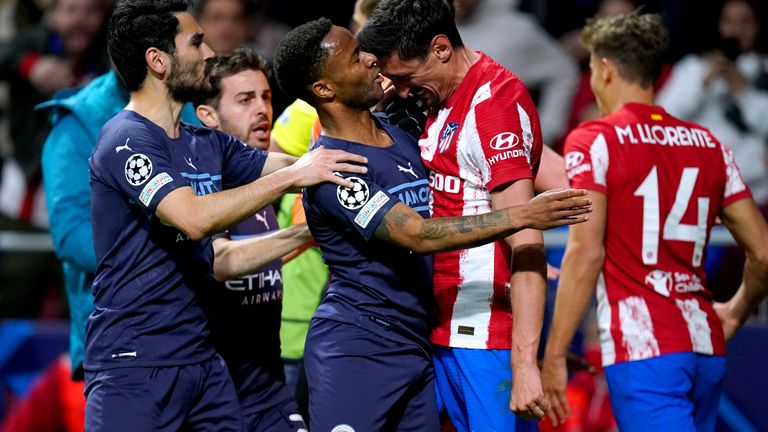 Sky Sports News reporter Ben Ransom discusses the fallout from the 'melee' in the Champions League match between Atletico Madrid and Manchester City.

"In the build up we were focused a lot on the styles. Guardiola before the game was talking about the aggression he was expecting, but I think he was expecting it to be a little bit less than we saw last night because it did boil over.

"There were a number of flashpoints. The first time we saw it was getting really nasty on the pitch was that melee which erupted after that tackle on Phil Foden, Felipe ultimately sent off. Stefan Savic, the former Man City player, got himself involved. There were shots of him pulling Jack Grealish's hair, he's putting his head into another player.

"I can't remember being at a game where there were that many players involved in such a melee, and it was physical. It was quite nasty and it went on for such a long time.

"Normally it all dies down pretty quickly and often there are a lot more peacemakers - it wasn't the case last night. I think it did just get to the point where Atletico's frustration really boiled over.

"It all kicked off again in the tunnel. From my point of view, the players were being shepherded down there and the security were doing their best to keep them from getting things thrown at them by the Atletico Madrid fans.

"And then just as they were disappearing from view, you could see them coming together again, police rushed in to separate them in the tunnel. So a lot for UEFA to mull over."

Guardiola: We were in big trouble with injuries

Atleti had very few chances to get back level in the tie, with Ederson called into action only once in the Wanda Metropolitano leg. The Brazilian goalkeeper was forced into a crucial stop against Angel Correa in the 102nd minute, in what was one of the final kicks of the match.

City, meanwhile, had only one major chance to extend their aggregate advantage when Ilkay Gundogan headed onto the post in the first half, with Pep Guardiola's side defending for most of the second half.

City boss Guardiola admitted his side struggled during the second half of Wednesday night's match, especially after losing two key players to injury. The visitors saw Kevin de Bruyne come off and receive treatment just moments before Kyle Walker hobbled off after clashing with Renan Lodi.

City have a FA Cup semi-final against Liverpool on Saturday and the injury blows to both players may not set them in good stead for that Wembley encounter.

"We were in big trouble [with injuries]," said Guardiola. "We can't forget that we played three days ago. To play Liverpool, travel, come here is difficult.

"I don't know what will happen in the next few weeks. Today we will celebrate because it's only the third time City have reached the semi-finals of the Champions League.

"In the second half, they [Atleti] were better than us. The first half we had the chances to do it but overall we are in the semi-finals. It's well deserved over the two games.

"The opponent is so tough. All the teams in the Champions League who come here find it tough. We concede very few goals but in the second half they were better. In the 180 minutes, the last 25 minutes they were better."

How the papers reacted to Atletico meltdown

On a night where Atletico Madrid went out of the Champions League after an ill-tempered draw, the British media criticised Simeone's squad for their actions.

Daily Mirror sports writer Mike Walters tweeted on Wednesday night: "Imagine supporting a team managed by Simeone, including Felipe and Savic, and actually wanting them to win. What a bunch of animals."

Meanwhile, Daily Mail football writer Jack Gaughan, who was at the Wanda Metropolitano stadium, described Atleti's actions as "genuinely disgraceful" while Martin Samuel from the same paper branded the Spanish side as "sore losers".

TalkSPORT host Adrian Durham added on Twitter: "Simeone's Atleti are absolutely lawless. Delighted they're out," while writer Paul Hayward added: "All that bluster and snarl and Atletico couldn't score in either leg. Savic and Felipe: horrible."

However, there was a drastically different reaction to Atletico's performance in the Spanish newspapers on Thursday morning, where Simeone's side were praised for their display. 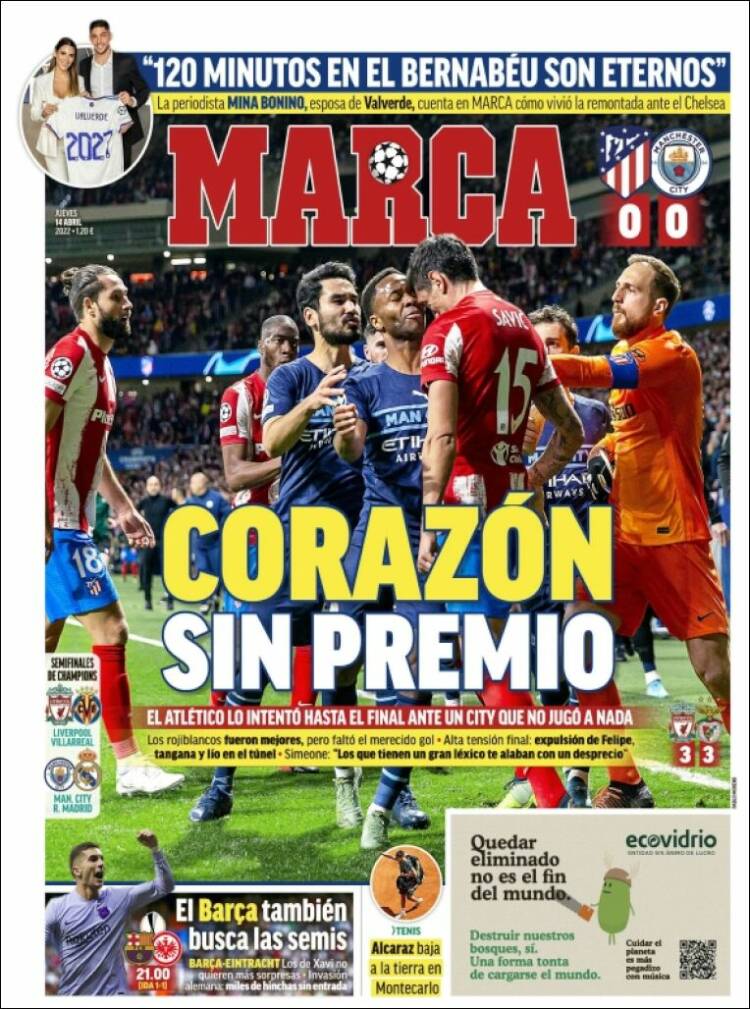 Marca went with the headline "heart without the prize", adding that "Atletico tried until the end against a City side that did not play for anything", while AS wrote that "a great Atletico were one step away from forcing extra time against a shrunken City." 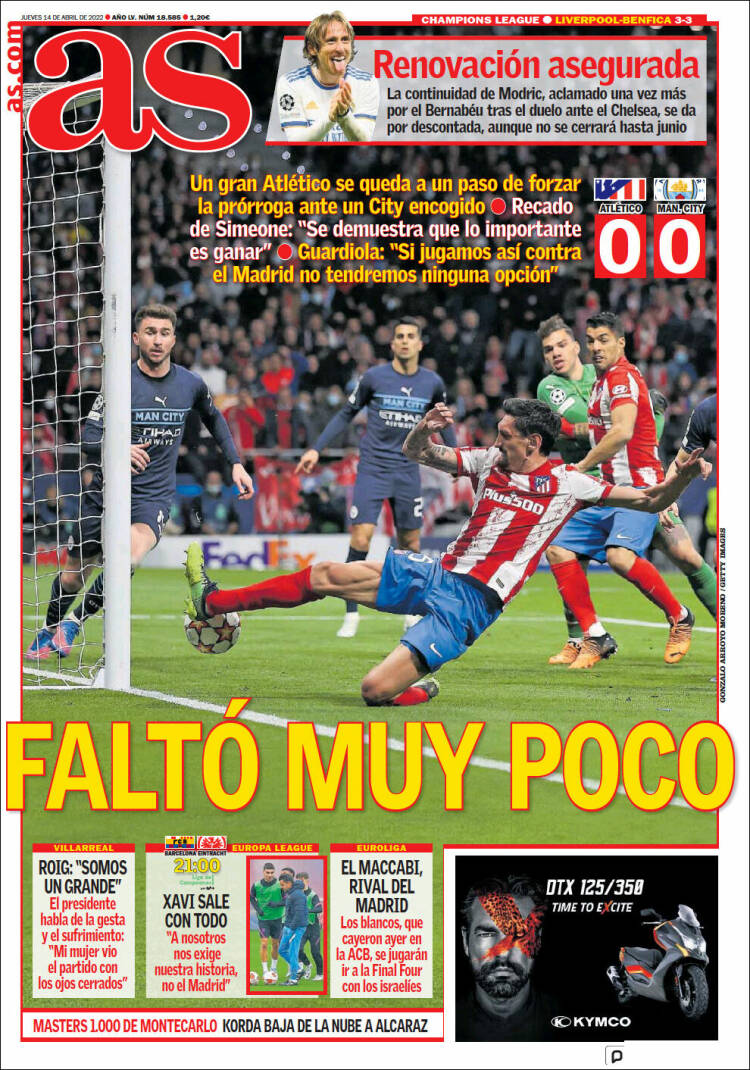 In their player ratings from the game, Marca also stated that "the world needs a leader like Savic" following a performance which saw him spark a melee between both sets of players by manhandling Foden, while he also appeared to headbutt Sterling and pulled the hair of Grealish.