Jack Ross leaves Dundee United after just 10 weeks in charge; the Tangerines were thrashed 9-0 by Celtic on Sunday; Ross had seen his team slump to the bottom of the Scottish Premiership table after just five games and 18 goals conceded; Liam Fox takes charge on an interim basis

Dundee United have sacked head coach Jack Ross after the Scottish Premiership side were thrashed 9-0 by Celtic to leave them rock bottom of the table.

The Tangerines were soundly beaten by Ange Postecoglou's top-flight champions, with Kyogo Furuhashi and Liel Abada both scoring hat-tricks at Tannadice - a result which sealed Ross' fate.

Dundee United have failed to win any of their first five league matches, losing four of them, and have shipped 18 goals.

Ross' side also exited the Europa Conference League via a 7-1 aggregate loss to AZ Alkmaar in the third-qualifying round. From the 7-0 second-leg loss, United conceded a goal once every 15 minutes, on average.

The 46-year-old was hired to replace Tam Courts in June after Ross' predecessor left the club by mutual consent before taking charge at Hungarian club Budapest Honved over the summer.

Assistant Liam Fox will take charge of the first team on an interim basis ahead of Wednesday's Premier Sports Cup match at Livingston with the club now searching for a permanent replacement. 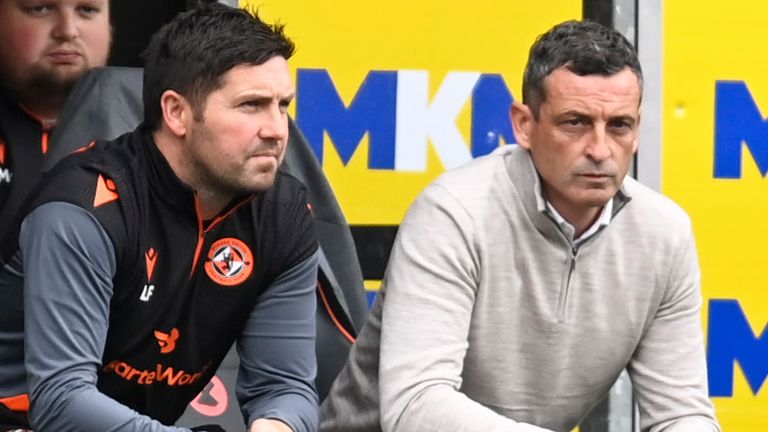 Fox, who was assistant to Ross, told Sky Sports News: "Jack's a top, top guy. I've got a good personal and professional relationship with him. Obviously he's disappointed, he was down when I spoke to him this morning but that's understandable.

"Results have been poor for the last three or four weeks now. We've been looking for the answers and we couldn't get them in time for Jack.

"Our main focus is tomorrow night and try to help the players prepare for what will be a very difficult game. I've got to try and do something slightly different. 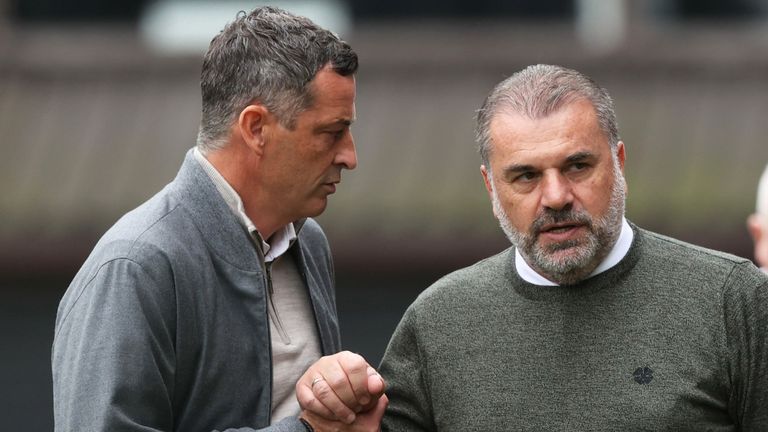 "The funny thing with football is it can swing very quickly, I spoke to the players about that this morning. They're feeling down, they feel like they've let Jack down and have let supporters down. We've got to come out tomorrow and be aggressive, on the front foot. Life's about choices, they can roll over and accept it or they can come out tomorrow and hopefully put a performance on.

"I felt a changing room this morning that was disappointed the manager had left. I think we're probably at the point now where there's a lot of talking being done, talk's cheap now, we've got to put on a performance and try to get some results.

"I've been asked to take training today and prepare the team for tomorrow night. That's where it's at at the moment. I'm still an employee until someone tells me differently."

In a letter to the club's fans, Dundee United chairman Mark Ogren said: "A string of poor performances and unacceptable results led to the board making the decision to relieve Jack Ross of his position as head coach.

"Such actions are never taken lightly and, as a board, we took a period of reflection and information gathering after Sunday's game before coming to our decision.

"This has been a horrendous run of results for the club and for that we apologise unreservedly to our fans. However, it is my belief that the tools and infrastructure remain in place for us to achieve success on the field. This will require everyone to be united behind what we are trying to do.

"In the almost four years of ownership at this club, we have achieved nearly all of our goals and objectives earlier than expected and as a board, we believe we can take things even further soon.

"I am confident the players, staff, executive team, and board currently in place are the ones to take us forward alongside a new head coach.

"As we begin the process of looking for our new head coach, please know this will take some time and I ask you all to remain patient and supportive.

"Your support has been exceptional, both in terms of ticket sales and vocal backing and I know you simply crave success for our club. I can assure you I share that craving and certainly expect we will again soon be seeing performances in which we can all be proud."

Ross' final admission: I'm not getting enough from the group 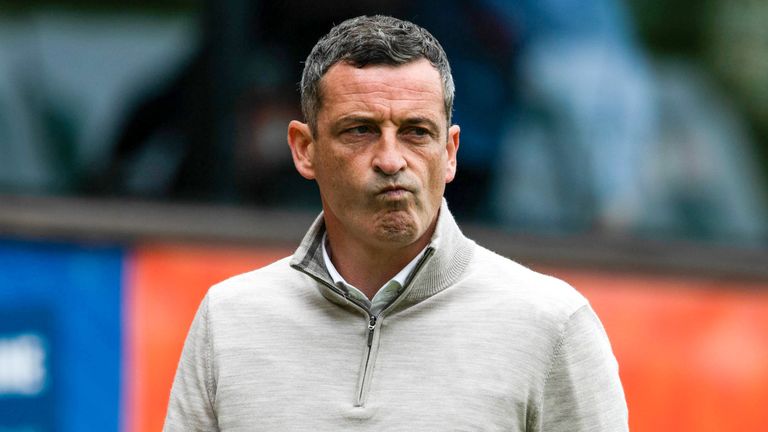 Ross said the defeat to Celtic was 'humiliating and embarrassing'

Speaking after the 9-0 defeat to Celtic, Ross admitted he was not getting enough out of his squad but was adamant that he wanted time to get it right again.

"I think prior to this season I hadn't lost a game by more than three goals as a manager, so this is hurting me and I'm suffering from it," he told Sky Sports. "It doesn't diminish my want to put it right. I've overcome challenges before and I want to overcome this one, but it hurts a lot.

"The extra attention, debate or speculation I accept that because that's just the nature of my job. When you're in charge of a team that's produced those two results [7-0 vs Alkmaar and 9-0 vs Celtic] then it's absolutely deserved.

"I'm not getting enough from the current group I have, so it would be weak and remiss of me to look for excuses and apportion blame to others at the club. We've got a good group here who should be producing better than they are, led by me.

"I can understand people looking at what we can do to strengthen the group again, but first and foremost I need to get more from the group than I'm getting."

Stiliyan Petrov speaking to Sky Sports: "As much as we are saying that Celtic were outstanding, Dundee United gave them the chance to be outstanding. They weren't competitive or aggressive. They had a couple of spells in the game and Steven Fletcher was outstanding in winning headers, but nobody was going for the second ball, nobody was going for tackles and they really struggled to create. They made it easier for Celtic and they would not stop."

James McFadden speaking to Sky Sports: "They didn't start the season poorly, they had a tremendous win against Alkmaar at Tannadice, a great performance. You talk about structure, energy, when to press and when to sit off, they got everything spot on [that day]. So it's possible that they can do it, because they've done it under Jack Ross with those players. It's very difficult.

"After the 7-0 [loss to Alkmaar], it doesn't leave your mind, it stays with you and it hurts. You've got strong characters in that dressing room but you're trying to pick each other up. You're looking for leadership from the manager, the manager is looking for a response from the players and at the moment, they're not getting it. A 3-0 against St Mirren, a 4-1 against Hearts and now you've got a 7-0 and a 9-0. It's a really tough one and this is a team that finished fourth last year. 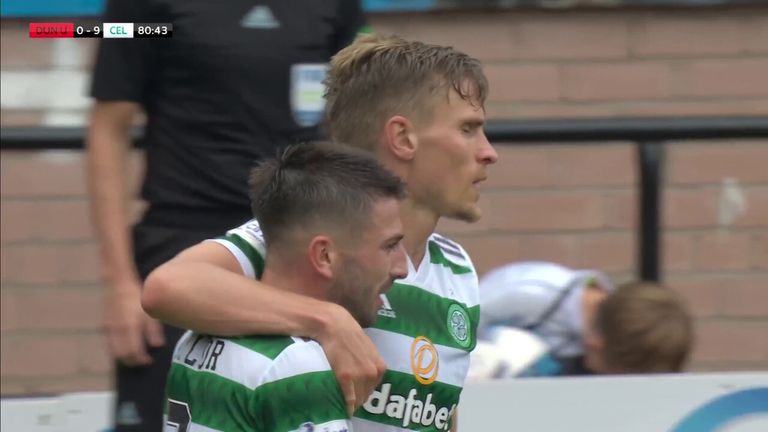 "As incredible as it sounds, because it's so short into his tenure, but if you've got a 7-0 and a 9-0 with a 4-1 and a 3-0 then something has to change. There will surely be a conversation as to whether things can be turned around because this was a 9-0, but it could have been a lot more. You can take one of them in isolation and say last week it was good, but the run they're on, something has to give and something has to change."

Former Dundee United player Sean Dillon speaking to Sky Sports: "It doesn't make for good reading. There's a lot of work to be done. They have to get together as a team, I know that sounds basic but they have to go to basics. They have to be really hard to beat, get into the first half an hour and be really tight. We weren't just getting close enough to people, it just opens the door to quality teams and Celtic were a quality team."