Gary Neville: Trent Alexander-Arnold must redress imbalance in his game - but it's not a time to give up on him

Gary Neville on Trent Alexander-Arnold: "It's an important juncture in his career where it's not a time to wade into him, it's not a time to give up on him. It's a time to get right behind him as he's one of the most exceptional talents you'll ever see as a full-back on the ball" 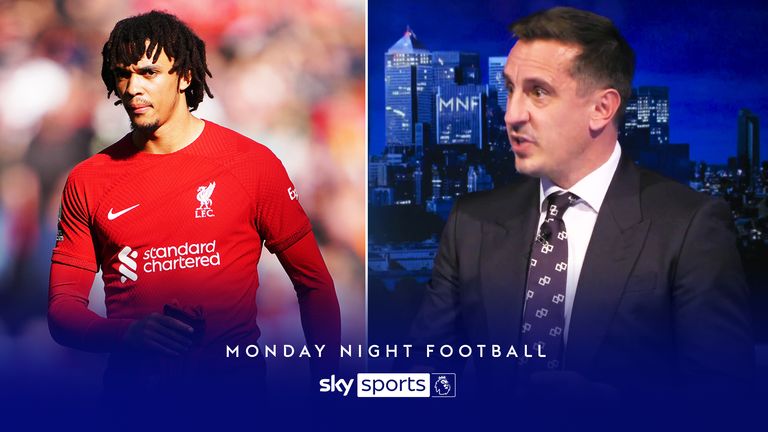 Trent Alexander-Arnold's offensive impact is so great any team in the world could utilise him, but his latest poor defensive display was analysed by Gary Neville on Monday Night Football.

Last week, Jurgen Klopp launched an impassioned defence of his right-back, whose World Cup hopes appear to be hanging by a thread, but accepts England manager Gareth Southgate has a different way of playing.

The 23-year-old was called up for the two Nations League matches against Italy and Germany but was an unused substitute for one and failed to make the squad for the second.

There has been a long-running debate as to why he cannot fit into the international side, with his apparent defensive deficiencies putting him behind Manchester City's Kyle Walker, Chelsea's Reece James and Newcastle's Kieran Trippier.

These were exposed once more by Brighton during Saturday's 3-3 draw at Anfield - and Neville believes the imbalance in his game must be addressed...

'Trent has to work on his defending'

I watched the goals against Brighton and there was a big conversation in Jurgen Klopp's press conference about Trent Alexander-Arnold. Klopp defended him but I feel he was involved in all three Brighton goals on Saturday.

I've wanted to do a piece on Alexander-Arnold on Monday Night Football for a long time. Trent isn't a young player any more. He's young in his age but he's actually got 250 matches for Liverpool and England. That's a mountain of games to have.

What does surprise me still when I watch him is three or four of the very basic things in full-back play...

These things can be taught in training and be coached every day because I was a poor full-back at the age of 20.

What we know now is that you cannot be a full-back in the modern game without having the ability to go forward.

It's near-on impossible. There's an expectation now that you are good on the ball going forward. That's why we don't see Aaron Wan-Bissaka playing under Erik ten Hag at Manchester United.

He's not deemed as capable enough in setting up play and taking the ball into the final third. You can no longer sit here and say, 'defending is his priority, defending is his first job'.

But the balance between being a good defender and a good attacker is imperative. You can't be 70-80 per cent attacker and only 10-20 per cent defender when you are a full-back. What Trent has at the moment is an imbalance in his game.

You can have a brilliant attacking part of his game like he has, and a less competent defensive part but it needs to be one that gets you through moments in games and you have to be capable of dealing with things.

If Liverpool aren't in as good a period as they have been for four or five years - which is what they are at the moment - or he plays for a less superior team in possession like England, then there's going to be a greater expectation that he is going to be in a defensive position for more of the game. That's what we are seeing at the moment.

It's a time to get right behind him as he's one of the most exceptional talents that you will ever see as a full-back on the ball.

During my Premier League career at United, I played 400 games and had 35 assists. He's had 44 assists in his last four seasons at the age of 23. It's absolutely ridiculous. What we have got here is one of the great talents this country has produced in this position.

But, I think there's an example in his own team where the balance is right in Andrew Robertson.

He goes forward, gets plenty of assists, lots of passes into his strikers and lots of good play into midfield but also he's competitive and he's good down that side in terms of his defending.

Upright Trent must get 'bright on his feet' 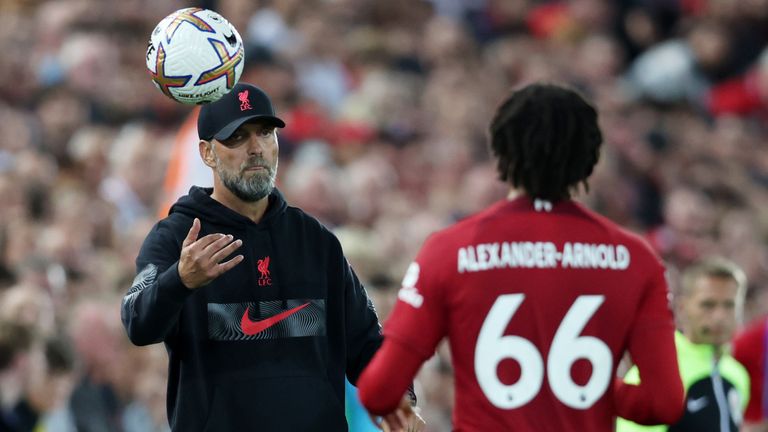 'If Trent is not a good defender he wouldn't play'

I remember in the early parts of my career when I was a centre-back - I wasn't very good as a one-on-one defender and I was actually hopeless going forward with the ball for the first two or three years at United.

What I recognised was that I had to start by getting 'bright on my feet' as a defender. Get low and get jockeying. I used to see Bryan 'Pop' Robson - who was a player at West Ham - in the summer. He had done some work with Steve Howey at the time, and I remember these jockeying exercises where I'd need to get low and twist from side to side.

He used to say things to me such as, 'a dog never turns its back'. The rest of lads used to laugh at me and Phil. It built an alertness in our defending. Trent is very upright when he defends.

I had to learn to become a one-on-one defender where you need to get out to people quickly. Being able to shift your feet quickly is a key part of defending.

I've been there where you're in a wide area and you feel exposed. He gets no support from Mo Salah outside him in terms of defensive work.

Don Howe then taught me about being alert when the ball is on the opposite side of the pitch. He was the best defensive coach I have ever seen at coaching a full-back when the ball wasn't near you.

Being able to swivel your head and judge the distances - these are the things I worked on for two or three years which made me into a pretty decent defensive full-back. I was watching these other players like Roberto Carlos, Paulo Maldini and Cafu in European football who were going forward and scoring goals.

I then saw Dennis Irwin on the other side of the pitch contributing by scoring free-kicks and I thought, 'I'm really basic'. So I started working on my crossing with Jim Ryan [Man Utd youth team coach] when I was in the first team.

I would go out and work on my channel ball into the striker's feet. A good channel ball is also a good cross. I was putting pressure on myself thinking in the final third, a cross was something special. 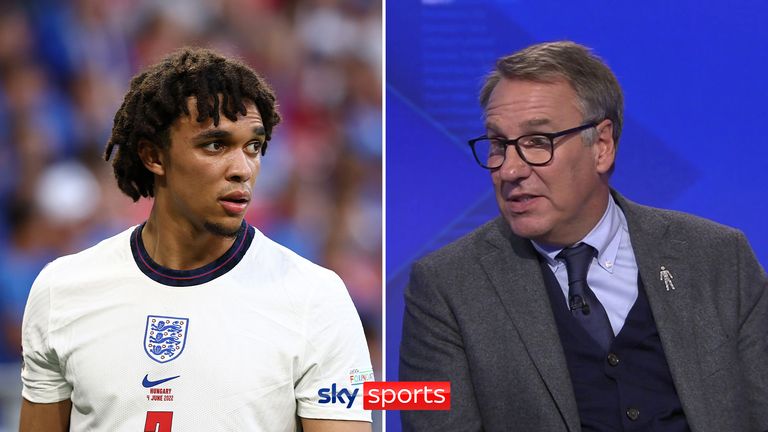 But I started to think about slowing myself down and practising 50 times each afternoon having longer or slower strides and whipping the ball into the box.

It took me until about 26-27 before I felt I became a pretty decent attacking full-back, where I overlapped and put crosses in the box of real quality.

Trent is going to have to do it in reverse. I learned to be a defender first, but Trent has all the attacking attributes. You can develop your game and you can work on these things.

I have been there where you are in a wide area and you feel exposed. He gets no support from Mo Salah outside him in terms of defensive work.

I would get it sometimes from the likes of Darren Fletcher, David Beckham or Ole Gunnar Solskjaer if he was playing on the right. Not so much Cristiano Ronaldo! But Beckham and Fletcher would work like dogs for me to give me that protection. I don't feel Trent gets that at Liverpool. 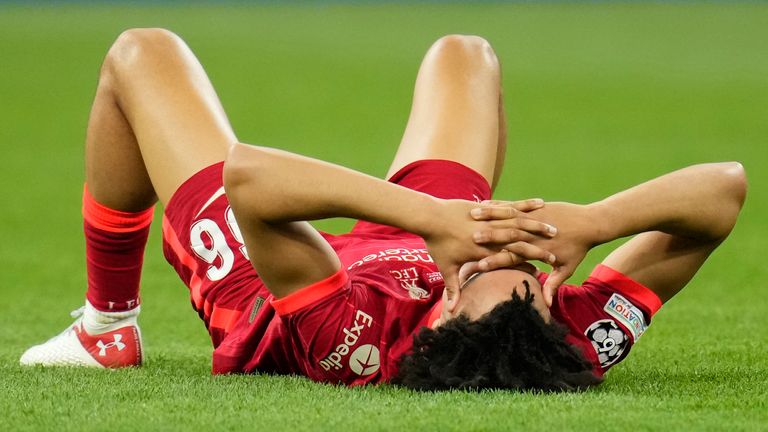 He made a couple of mistakes against Brighton but the biggest issue for Liverpool isn't Trent Alexander-Arnold. There's always a focal point but Virgil van Dijk is not playing at his absolute best while the sale of Sadio Mane is causing a problem.

Injuries in midfield have also caused them a problem and maybe they should have signed a world-class midfielder in the summer. I also feel they have been punching well above their weight.

They have got an exceptional manager, a wonderful team spirit married with the crowd all coming together. They've had an outstanding time but when you look at their net spend compared to these two clubs today [Man City and Man Utd], they are competing with both hands tied behind their back.

FREE TO WATCH: Highlights from Liverpool's draw against Brighton

The Liverpool fans may start to think they need to be spending at the same rate as the other clubs - like Chelsea have done this summer - but if I was Liverpool I would not be panicking too much. They have still got the best-performing manager in this league over the last four or five years with what he's done given the spending.

At the moment, it's not right as we are not seeing that ferocious press but they have built up too much credit in my view to stick the knife in at this point where it would be too early. Liverpool fans and Klopp will be worried, and there will be some disappointment at the level they are at now - which is miles off the level of Manchester City at present. 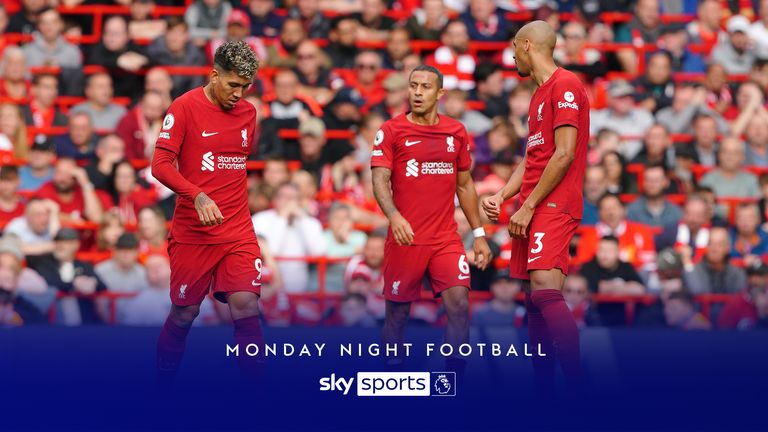 Are they going to compete this year for the title? Probably not. You never know because Klopp can do the exceptional and he has surprised us by staying on the coat-tails. They pushed them right to the end last season but they had no right to.

Darwin Nunez needs to settle in and they need to get back to the levels they have set.

Speaking on Monday Night Football, Jamie Carragher reflected on the problem Liverpool have with starting games slowly, with Klopp's team currently sitting bottom of the table for points won based on the first-half score lines alone.

"It's a huge concern," Carragher told Sky Sports. "They are always giving themselves so much to do. They have not lost too many of those games, so it's not an attitude problem.

"They've managed to get back into games. In the past we have spoken about Liverpool conceding goals because of a high line but for me a big problem right now is the midfield.

"Teams are coming through and getting at that back four far too easily - and also early in games, hence the poor starts. Brighton were 2-0 up but I think it's fair to say it should've been 4-0 after 20 minutes because Liverpool are not organised and not difficult to beat as they always were.

"Klopp's thing was always to make Liverpool the hardest to play against - right now, they look the easiest team to play against. Some of what we saw in the first half against Brighton you would have expected later in games if Liverpool were chasing them.

"Every supporter in the summer would tell you they felt midfield would be a problem this season. Fabinho has been miles off the pace from what he's been this season. There have been times where they have been lucky in situations."