Police fired tear gas as supporters invaded the pitch during the game between Arema FC and Persebaya Surabaya in the city of Malang on Saturday, triggering panic in the crowd and sparking a crush as they fled for the exits 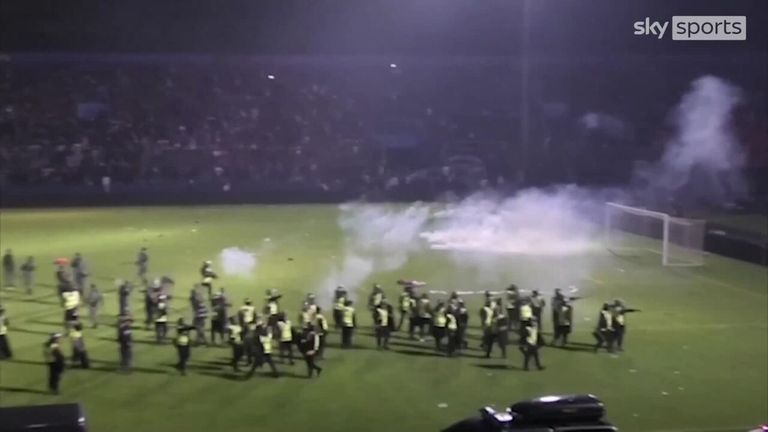 At least 125 people have been killed in a riot at a football match in Indonesia between Arema and Persebaya Surabaya. (Warning: video contains content of a distressing nature)

Delays in unlocking the gates at an Indonesian football stadium after violence broke out at the end of a match contributed to a disaster in which at least 125 people died, the national football association has said.

Police fired tear gas as supporters invaded the pitch during the game between Arema FC and Persebaya Surabaya in the city of Malang on Saturday, triggering panic in the crowd and sparking a crush as they fled for the exits.

Tear gas is banned at football stadiums by the international governing body FIFA, which also recommends for all exits to remain unlocked during a match for safety purposes.

Indonesia's football governing body said it has permanently banned the chief executive and security coordinator of the team that hosted Saturday's match, Arema FC, for failing to secure the field and promptly issue a command to unlock the gates. 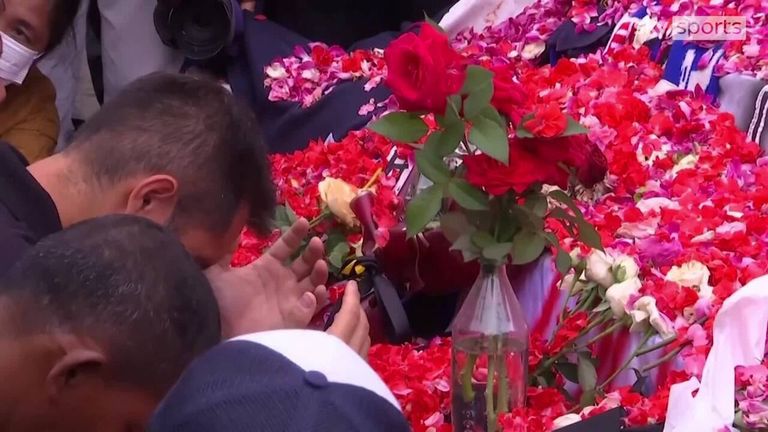 "The doors should have been open, but were closed," said Erwin Tobing, chief of the association's discipline commission.

Association spokesperson Ahmad Riyadh added: "Because of a lack of workers, only a few people were ordered to open the gates, and they had not yet reached some doors when spectators began rushing to escape tear gas fired by police in an attempt to control fans who had entered the field."

Police, however, continued to insist Tuesday the gates were open but were too narrow and could only accommodate two people at a time when hundreds were trying to escape.

An Indonesian police chief and nine elite officers have been removed from their posts and a further 18 officers are also being investigated following orders from Indonesia president Joko Widodo.

FIFA president Gianni Infantino called the deaths "a dark day for all involved in football and a tragedy beyond comprehension".

Some local officials had put the death toll at 174, but East Java Deputy Governor Emil Dardak said the number of fatalities had subsequently been revised down to 125.

"The earlier figure may have included duplicate fatalities," he said.

More than 300 people were taken to nearby hospitals but many died on the way and during treatment, Mr Afinta said.

Grieving relatives waited for information about their loved ones at hospitals and others tried to identify bodies laid out at a morgue.

FIFA president Infantino said: "The football world is in a state of shock following the tragic incidents that have taken place in Indonesia at the end of the match between Arema FC and Persebaya Surabaya at the Kanjuruhan Stadium.

"This is a dark day for all involved in football and a tragedy beyond comprehension. I extend my deepest condolences to the families and friends of the victims who lost their lives following this tragic incident.

Indonesia's football association, known as PSSI, has suspended the premier league indefinitely in light of the tragedy and banned Arema from hosting matches for the rest of the season.

Malang police chief Ferli Hidayat said there were some 42,000 spectators at Saturday's game, all of whom were Arema fans because the organiser had banned Persebaya fans from entering the stadium in an effort to avoid trouble.

Hooliganism is rife in the football-obsessed Indonesia where fanaticism often ends in violence, highlighted by the 2018 death of a Persija Jakarta supporter who was killed by a mob of hardcore fans from rival club Persib Bandung.