As part of Sky Sports' African Heroes series to mark Black History Month, former Bolton and Nigeria midfielder Jay-Jay Okocha discusses his incredible career and some of his greatest moments.

The Premier League has been a melting pot of footballing brilliance since its inception 30 years ago, yet few compare with the mesmeric flare exhibited by Jay-Jay Okocha.

Okocha's freedom and expression on the pitch bordered on ridiculous - he did things with a football few could, or even thought possible. To this day, such talent is seldom seen at the highest level of the game, but for him it was the mere continuation of the footballing philosophy he nurtured on the streets of Enugu, Nigeria.

"I think it was my background, my upbringing, playing for the love of the game as a child," Okocha exclusively told Sky Sports, reflecting on what made him the player he was. "I wasn't taught how to play football; I went out there and just started playing because I love the game.

"It was our only toy, it was where we could express our joy, our freedom without any manager, anybody nagging you, telling you what to do. Taking football on later as my profession, you can imagine [how good it was] having your toy and being paid to have it."

Okocha's introduction to European audiences came completely by chance. A holiday to Germany in 1990 presented an opportunity to train with Borussia Neunkirchen. He grasped it, and a pioneering spell in German football, which would see him play alongside Tony Yeboah at Eintracht Frankfurt, took root.

"Yes, it's true," Okocha recalled. "I was there on holiday; Germany had just won the World Cup at Italia 90. Of course, wherever I go, I go with my football boots.

"One day I met with the manager, I asked if I could train with them, he asked if I was sure I could cope, and I said just give me a chance. After the training he asked me if I could come back the next day."

Moves to Fenerbahce and then Paris Saint-Germain would follow before Okocha's career reached an unexpected crescendo in the north west of England. 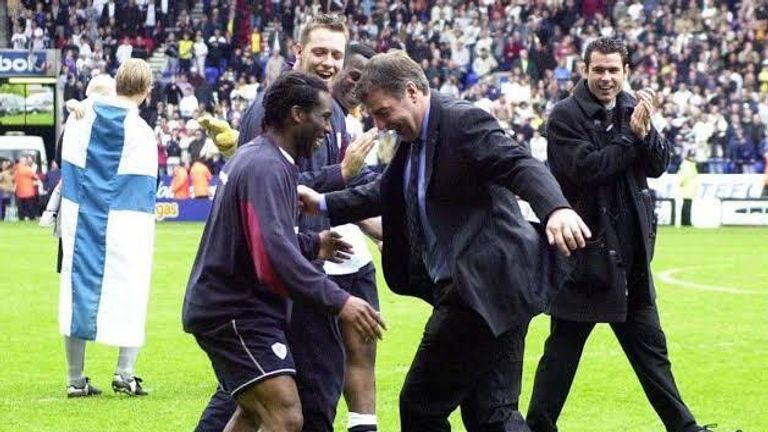 "It is amazing when you see people who have got different mentalities, different cultures [working together]," Okocha said.

"It was like a multi-cultural team, but what made us strong was that we had the same goal. We managed to change our mentality to suit each other. At some point we started playing snooker on Thursdays - I never played snooker before, I was rubbish!"

From his spectacular solo run and finish against West Ham, his personal favourite, to an outlandish free-kick double against Aston Villa, Okocha earned a fearsome reputation at Bolton for delivering goals and moments in his trademark dazzling fashion. We look at the greatest goals Nigerian icon Jay-Jay Okocha has scored from his time in the Premier League.

"Well, that's me," he replied when asked why he even considered going for goal before firing that outrageous free-kick around the Aston Villa wall with the outside of his right boot with an effort which was quickly coined as the 'banana shot'.

"Youri was by my side, and I said, 'step back, I want to try something'. He said, 'are you mad?' and I said, 'don't worry'. When it works it looks great, if it doesn't you look stupid, but I was never shy of taking risks and trying things."

Risk and reward are essential components of football. Striking the right balance with the games fundamental principles is what separates good footballers from the very best. Okocha embraced doing just that with a smile on his face.

After a career which took him to so many dressing rooms and countries, saw him sample so many cultures and deliver so many memorable moments, it was a balance Okocha struck just right. It typified his footballing journey.

"I look at that as me being lucky, fortunate," Okocha said. "It made me a better person, I learned a lot and saw the world in a different perspective. Being almost everywhere in the world helped me be the person I am today."

Celebrate the Premier League's African Heroes throughout Black History Month and beyond across Sky Sports and the Sky Sports Football YouTube channel.