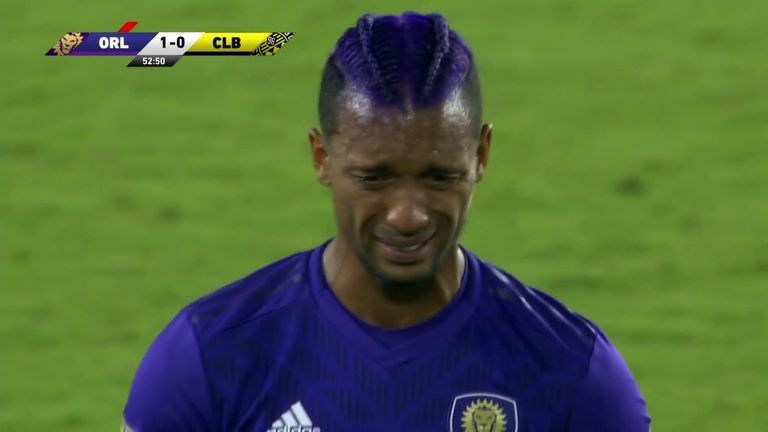 Highlights from Wednesday’s MLS matches, as former Manchester United winger Nani was brought to tears while playing for Orlando City

Nani was sent off for Orlando City as they beat Columbus Crew in the MLS on Wednesday with former Man Utd team-mate Javier Hernandez scoring for LA Galaxy in their draw with the Seattle Sounders.

Orlando City went into third above Columbus in the Eastern Conference standings with one game left, with Crew eliminated from the Supporters' Shield race for the regular-season title.

With Orlando City down a man after Nani received a red card in the 52nd minute, Michel headed the ball to himself and tapped it between goalkeeper Eloy Rooms' legs for his fifth goal of the season. Chris Mueller scored his 10th goal in the 27th minute. Mauricio Pereyra assisted with both goals.

Harrison Afful scored his first goal of the season for Columbus, scoring from the edge of the 18-yard box in the 56th minute.

Javier Hernandez scored in the 78th minute, but LA Galaxy were eliminated from play-off contention in the Western Conference despite a 1-1 draw against Seattle Sounders.

Hernandez converted his late strike off a good pass from Efran lvarez. His goal was just his second during an injury-plagued first season in MLS.

Ral Ruidaz scored his 11th goal of the season in the third minute of injury-time for defending MLS Cup champions Sounders, who have won just once in their last six games while falling out of the top spot in the Western Conference.

Five-time MLS Cup champions Galaxy will miss the post-season for the third time in four years despite going unbeaten in the last two games under interim coach Dominic Kinnear.

Kellyn Acosta scored in the 83rd minute and Colorado Rapids clinched a play-off spot with a 1-0 victory over Portland Timbers. It is Colorado's first trip to the play-offs since 2016.

The Rapids had five games called off this season because of coronavirus cases, but instead of total points, the MLS decided to use points per game for a play-off position, boosting Colorado's chances with fewer games played.

Steve Clark made three saves for the Timbers, who were unbeaten in their previous four games including wins in the past two.

Portland were hurt by the loss of Jaroslaw Niezgoda, who tore his left ACL in a victory over Vancouver last weekend. Niezgoda, who had eight goals, will miss the rest of the season.

Cristian Espinoza scored a goal and assisted on another by Chris Wondolowski as the San Jose Earthquakes beat Los Angeles FC 3-2 to lock up a play-off berth.

Latif Blessing scored in the 23rd minute to give LAFC a 1-0 lead but an own goal by Eduard Atuesta tied it about five minutes later.

Wondolowski, whose 166 career goals are the most in MLS history, scored on a volley in the 37th minute to give the Earthquakes a 2-1 lead. Espinoza then lobbed a cross from the left to the far post where Wondolowski tapped it home.

San Jose then played a man down after Jackson Yueill was shown a second yellow card in the 61st minute before Espinoza took a cross from Shea Salinas and whipped it home to give San Jose a 3-1 lead.

Diego Rossi capped the scoring in stoppage-time with his MLS-leading 14th goal of the season.

On the counter-attack, Hollingshead beat a pair of defenders to the ball, momentarily lost control, and then slipped a left-footer inside the post. Maurer made three saves and has seven clean sheets this season, including four in the last six games.

Jose Aja and Robin Lod scored in the second half and Minnesota United overcame a two-goal deficit to draw 2-2 with Chicago Fire.

Minnesota United stretched their unbeaten streak to seven games as Aja scored after a set-piece from close range, tapping a shot to the near post which beat goalkeeper Bobby Shuttleworth in the 64th minute. Lod scored a header from Romain Metanire's cross in the 80th.