Boubakary Soumare: Manchester United and Chelsea set to battle it out for his capture 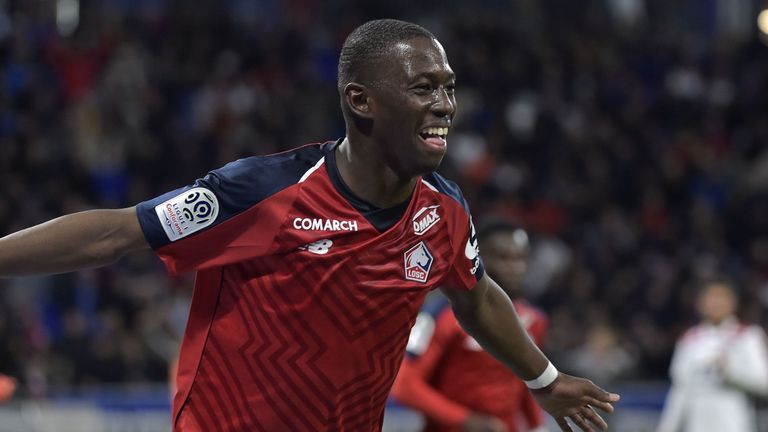 Lille midfielder Boubakary Soumare is leaning towards choosing Chelsea over Manchester United, according to Kaveh Solhekol

Boubakary Soumare is set to decide between signing for Manchester United or Chelsea before the transfer deadline.

Arsenal are said to be no longer in the running for the sought-after Lille midfielder, and neither are Real Madrid nor Valencia.

United and Chelsea have held talks over the player but no decision is expected to be made before Lille play Paris-Saint-Germain on January 26.

The 20-year-old, who has two-and-a-half years left on his Lille contract, is a box-to-box midfielder in the mould of Paul Pogba and has impressed across 23 appearances in all competitions this season, including six in the Champions League.

Soumare is expected to be the only one of Lille's promising young stars to be sold this month, despite 21-year-old striker Victor Osimhen and 22-year-old centre-back Gabriel also being tracked by top clubs from across Europe.

The France U21 international was signed from Paris Saint-Germain on a free transfer by Lille's highly-rated sporting director Luis Campos.

'Paul Pogba without the baggage'

Soumare will cost United or Chelsea north of £40m - not bad for a young player who Lille acquired for nothing from PSG's youth system. He's the latest gem uncovered and polished by Lille's sporting director Luis Campos.

Two other Lille youngsters, striker Victor Osimhen and central defender Gabriel, are also coveted by big European clubs. But they will not leave until the summer window.

Soumare wants to leave this window and Lille have enough midfield options to allow his wish. He prefers to play in the Premier League, despite being monitored by Real Madrid.

Some say United will cool their interest once the deal for Bruno Fernandes is completed, but Old Trafford could do with both. Fernandes likes to run with the ball, set up goals and score them.

A source close to Soumare describes him as "Paul Pogba without the baggage". Obviously he's not Pogba class yet, but certainly has the potential to emulate his compatriot.

Chelsea are back in transfer business this window, and Soumare fits their current model well. Another promising, gifted youngster. Frank Lampard can probably picture him linking up with Tammy Abraham and Mason Mount.

Fellow Frenchman N'Golo Kante would be there to help and guide Soumare on to even greater heights. That may prove a decisive element.