Carlos Mendes Gomes began his career at Atletico aged 15 and, via England's 10th tier, is now part of a Morecambe side who are shock promotion contenders in League Two and face Chelsea in the FA Cup. Follow that clash and all the other third-round games in our live blog on Sunday

You would think a player coming from Diego Simeone’s Atletico Madrid would be prepared for whatever is thrown at them.

That is until you step foot into the North West Counties Football League - the 10th tier of English football, as the well-travelled Carlos Mendes Gomes can testify.

He told Sky Sports: "Every Saturday after games I used to go home and ice my ankles because it was that bad!

"I remember my mum told me to stop playing if this is what's going to happen all the time. I just told her it was part of the game! When you love it, you don't care about the pain."

His move from Madrid to Manchester might sound daunting but, when you consider that Mendes Gomes and his family relocated from Senegal to Lanzarote as a child, before heading over 900 miles on his own to the Spanish capital aged just 15, he seems to take things in his stride.

"Even though everything was going well in Lanzarote, it doesn't have that exposure, in terms of making it big as a footballer. That was the reason I went to Madrid," he added.

"I went and played for Getafe the first year and the second year is when I got signed by Atletico. I was 15."

The season he joined the Los Colchoneros youth set-up, Simeone's side went on to win their first league title in 18 years, as well as finishing as runners up in the Champions League, losing the final in extra-time to local rivals Real Madrid.

"It was an amazing feeling (being a part of the club). When we were going to games and watching the first team, I'd think that one day I want to have this feeling and I want to be part of it," Mendes Gomes said.

"At the beginning we would take pictures with the first-team players but after that it becomes normal, taking advice and trying to learn from them."

Koke was someone that Mendes Gomes not only admired but also occasionally played with in the Atletico Madrid B team, along with brothers Lucas and Theo Hernandez, who are both now at Bayern Munich and AC Milan respectively.

"I played for [Atletico Madrid] at under-16s and then I played for the under-18s. But then my dad decided to move to England because he thought we'd have a better opportunity for an education for me and my little sisters," he explained.

"We had to move to England and, at the beginning, I didn't want to because I had my football back home but I thought, 'If it's meant for me to be a footballer, whether it's in Spain or England, I will be successful'.

"The first year I didn't play any football because I couldn't find a team but the second year I didn't really care who I played for.

"I always believed that if I trust my ability, it doesn't matter where I play, someone can spot that. I was just playing, making sure everything was right and if any opportunities were to come, I'd try and take it."

"It was tough because I didn't speak any English, but I just wanted to play so I found a non-League club.

"I always believed that if I trust my ability, it doesn't matter where I play, someone can spot that. I was just playing, making sure everything was right and if any opportunities were to come, I'd try and take it."

After two years at non-League side West Didsbury & Chorlton, the chance to play in the Football League for Morecambe came about having been spotted playing for his college, but on one condition - they had to avoid relegation.

On the final day of the 2017-18 season, they were facing play-off bound Coventry and knew a win away at the Ricoh Arena would mean they stay up, while a draw would leave 23rd-placed Barnet needing to win by a seven-goal margin.

"It was one of the most nerve-wracking games of my life, I couldn't stop checking the score," said Mendes Gomes. 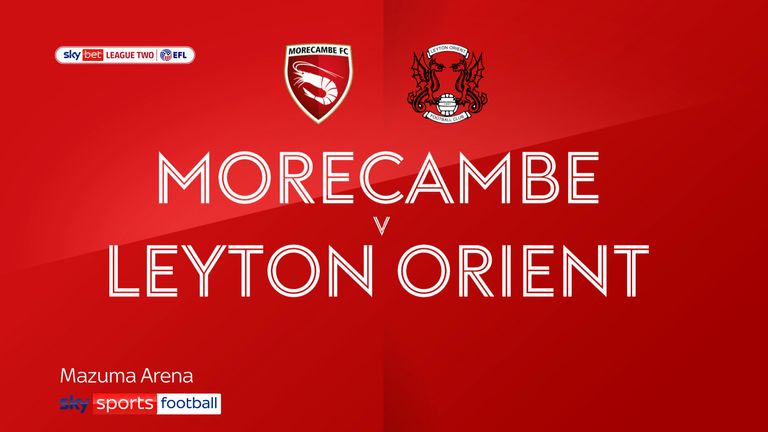 A 0-0 draw was enough to keep the Shrimps in the Football League but, more importantly, meant they had secured the signature of the talented winger Mendes Gomes, who has since gone on to be one of the first names on the Lancashire side's teamsheet.

But it hasn't always been plain sailing for the 22-year-old. Having made 15 league appearances in his first season at the Globe Arena, Mendes Gomes only made the squad for two of their opening 20 games of last season.

"The first season I was playing lots and then I wasn't not even on the bench. I believed I deserved to play more than because of the way I was performing in training and the team wasn't really doing that well, at that time," he said.

"I thought I should've at least got a chance, but it didn't happen unfortunately. Then, when Derek Adams took over, he gave me that opportunity and I made sure I took it."

Having made no appearances before Jim Bentley's departure in October 2019, Mendes Gomes started 15 of Adams' opening 20 games as manager.

"[Adams] has taken my game to the next level - mentality-wise and also my technical ability. He's given me the confidence to go onto the pitch, express myself and just be me," says Mendes Gomes.

"He's added more directness to my game. My relationship with him is great, when the manager speaks highly in interviews and one-to-one, it's really pleasing to hear."

A fantastic start to the season has the Shrimps firmly in the top seven, despite many tipping them to be part of another relegation dogfight this season, which Mendes Gomes insists is down to a pre-season effort to raise the expectations of the club.

"We had this mindset from the start of the season, we don't want to be Morecambe who just survive relegation each year and never fights for anything. We want to push for the play-offs and we believe we have the team to go out and do it."

As for Mendes Gomes personally, he has seven league goals so far this campaign and, along with the high standards set by his manager, he demands a lot from himself and insists that there's still a lot more to come.

He said: "Personally, it's been alright. There's always room for improvement and I believe that I can actually up it and do better for the team, scoring and assisting more goals."