It was billed as the battle of the Premier League super managers but few expected Antonio Conte to win it. Nick Wright examines how the Italian upstaged Pep Guardiola, Jose Mourinho and the rest..

Pep Guardiola's unveiling was a carefully stage-managed Q&A in front of thousands of Manchester City supporters. Jose Mourinho's at Manchester United was a media circus with all the usual theatrics. But when Antonio Conte faced the cameras for the first time as Chelsea manager last summer, there were no crowds or soundbites.

The Italian spoke for 15 minutes at a press conference sandwiched between two of his notoriously gruelling training sessions. Instead of bravado or bluster, there was a simple message. "For this club to get back into the Champions League," he said, "to get back to winning the title, I know only this verb: work, work, work."

It did not seem particularly significant at the time, but in hindsight, it set the tone for the season ahead. While his rivals took the media spotlight, Conte was quietly plotting Chelsea's success on the training field. "We are underrated a bit, and we might slip under the radar," he added. "But I hope there is a small flame flickering here that can grow into a blazing inferno."

Conte's comments have proved prophetic, but it took time for the fire to ignite. Back in September, when a galling 3-0 loss to Arsenal left them eighth in the Premier League table, some bookmakers rated Chelsea's title chances at 25/1. Conte was lagging behind not just Guardiola and Mourinho but also Mauricio Pochettino, Arsene Wenger and Jurgen Klopp.

Gradually, though, he galvanised a squad that was still suffering a hangover from the previous season, and it was after that defeat at the Emirates Stadium that he achieved something none of his rivals had managed: with the switch to 3-4-3, he struck upon a system that suited his players perfectly. As others scrambled around for solutions, Chelsea embarked on a 13-game winning run.

The tactical change was the catalyst for Chelsea's transformation but it was not as straight-forward as they made it look. Adapting to such an unfamiliar formation required hours of repetitive positional work on the training ground. Conte needed total commitment from his players. Speaking to Victor Moses recently, it was clear he earned it from the start. 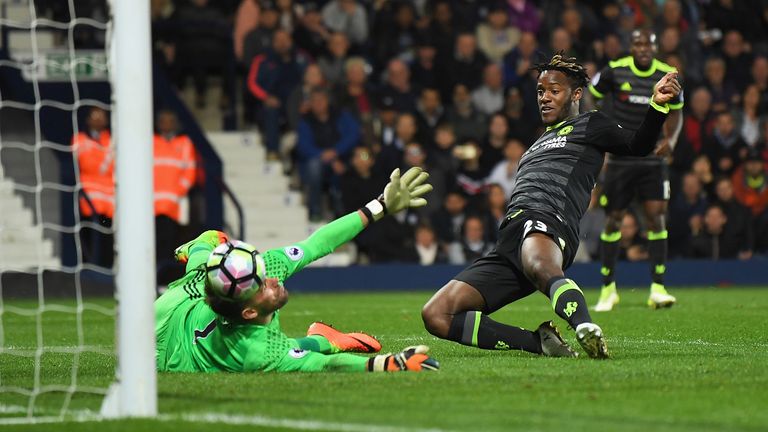 "We've got a manager now who gives everyone the opportunity to express themselves," Moses told Sky Sports. "I felt that from the start, right from the first day of training. He was talking to all the players. There was no favouritism. Everyone was the same to him. As long as you went out and proved yourself, he would give you the opportunity."

Moses is perhaps the best exponent of Conte's coaching influence. The Nigerian international seemed to have hit a wall at Chelsea having spent the previous three seasons out on loan, but his reinvention as a wing-back - a position he admits he had never even considered playing before this season - is a huge credit to his manager.

"He knows I'm good offensively," added Moses. "He has always said to me that I'm very good in one-v-ones, but defensively he's always working hard on me in training to make sure I'm solid. He talks to me a lot. It has helped bring my game to another level."

Sky Sports pundit Matt Le Tissier rates each of Chelsea's title-winners out of 10.

It's a similar story for David Luiz, who ironed the errors and inconsistency out of his game thanks to the same kind of one-on-one guidance from Conte. "He gives me a lot of advice about the way to read the game because in my position I need to cover everyone," the Brazilian told Sky Sports recently. "I love working with him. He works on details and he has helped me a lot."

Chelsea's players welcomed Conte's arm-around-the-shoulder approach having tired of the tough love Mourinho is now employing at Old Trafford, but that's not to say it has been an easy ride. On the contrary, Conte's punishing training sessions were a shock to the system.

The rewards, however, can be seen in the intensity and relentlessness that has driven them to the title. With Conte pushing them to their limits at their Cobham headquarters, Chelsea are covering more ground and making significantly more high-intensity sprints than last season. "We've got a lot fitter," added Moses last month. "He pushes us hard."

Improved fitness and tactical discipline have provided the foundations for Chelsea's success and Conte was also aided by a schedule free of European commitments, but they were still dependent on Diego Costa and Eden Hazard rediscovering their best form after struggling so badly last year. Under Conte, they have contributed 35 goals between them.

Conte passed arguably the toughest test of man-management skills there is with Costa. The combustible striker's relationship with Mourinho deteriorated last year, but his new manager has kept him in line impressively. A show of petulance against Leicester in October was handled with calm and authority. Conte even kept him on side after a training ground bust-up in January.

Hazard has been treated just as carefully, with Conte managing his workload by substituting him more times (24) than any other Premier League player all season. By saving the Belgian's energy, Conte was able to keep him fresh throughout the season without rotating him out of the side.

Perhaps most impressive of all, however, is the collective mentality Conte has instilled in his team. While each of their top-six rivals have come up short at key moments, Chelsea have shown resilience when it matters. Even when defeats to Crystal Palace and Manchester United threatened to derail their progress in recent weeks, they always mustered a winning response.

In fact, Conte's side have not dropped points in consecutive games once since September. "Our pathway is always the same whether we win or lose," said Conte earlier this season. "He's rubbing off on us," added Gary Cahill. "We all like that, we all want to go out and work hard for each other."

There's that word again. Conte started the season in the shade but he has the spotlight now. As Chelsea celebrate another title triumph, it's fair to say the hard work paid off.