Gunners impress during 1-1 draw with Jurgen Klopp's side

A rare win over a big six rival may have eluded Arsenal against Liverpool on Saturday but they showed signs of encouraging development under Unai Emery, writes Peter Smith...

Fireworks went off in the sky above the Emirates Stadium at full-time of Arsenal's 1-1 draw with Liverpool on Saturday night. While no one inside the ground was celebrating, Gunners boss Unai Emery could at least spend the rest of his birthday reflecting on a promising performance from his team.

Three months and 14 undefeated matches on from Arsenal's back-to-back defeats to Manchester City and Chelsea at the start of the season, Emery's side showed progress and potential during a fun and frantic contest with Jurgen Klopp's visitors.

Arsenal had been behind within 15 minutes in both of those early losses to City and Chelsea and a reputation for slow starts has stuck. 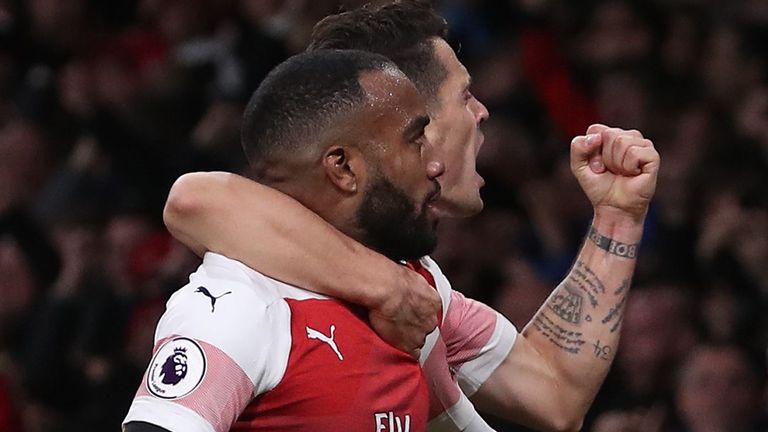 Highlights from Arsenal's 1-1 draw with Liverpool in the Premier League.

But Emery's men showed intent from the off against their table-topping guests, bringing an intensity to the match which would see them finish having out-run and out-sprinted a Liverpool team famed for their hard work.

Liverpool were a threat, undoubtedly. Roberto Firmino hit the woodwork and Sadio Mane was wrongly flagged offside for the follow-up, while Virgil van Dijk's looped header kissed the post in first-half stoppage time.

But in between, Arsenal took the game to their below-par visitors, firing off nine shots, the most Klopp's side had faced in the opening 45 minutes of a Premier League game since February 2017.

Henrikh Mkhitaryan headed wide, Alexandre Lacazette had an effort rightly ruled out and then flashed across the face of goal as the Gunners searched for a first-half score they've found so hard to come by this season. It eluded them once more, but their display was an encouraging one.

Arsenal haven't led at half-time in any of their 11 Premier League matches so far this season. However, the Gunners have scored more goals after the break than any other side (19).

If work ethic, pressing and intensity have been hallmarks of Emery's early impact on Arsenal's play - forged during meticulous and high-energy training sessions - then so too is the spirit he has forged in the camp.

"The reaction of the team was perfect," goalkeeper Bernd Leno told Arsenal's official website afterwards. "That shows the character of this team."

With the help of personnel and tactical changes instigated by the always animated Emery on the touchline, Arsenal found a way back.

Arsenal have won more points from losing positions than any other Premier League side in 2018-19 (8).

Substitute Alex Iwobi, who was switched across the pitch to the left flank shortly after coming on, slipped a smart pass through to Lacazette, who showed great composure to turn away from Alisson before bending in the equaliser.

Emery's decision to take off top scorer Pierre-Emerick Aubameyang for Iwobi had raised eyebrows, but this wasn't the first time his mid-game change has made an impact. Arsenal's subs have been involved in more Premier League goals this season than any other side (six goals, four assists).

That also underlines the attacking depth the manager has at his disposal. Only Manchester City have scored more than the Gunners this term, while the link-up play between the attacking quartet of Lacazette, Aubameyang, Mesut Ozil and Mkhitaryan was breath-taking at times.

We speak to Romain Molina, author of an authorised biography of Unai Emery, to discover what the Arsenal boss is really like…

In all, seven different Arsenal players created a chance, with Ozil - who showed off his repertoire of flicks and back-heels - leading the way by providing four openings for his team-mates.

"Progress is with time. Long time," Emery said in his post-match press conference and while he stated this performance surpassed Arsenal's efforts against City and Chelsea earlier this season, he is aware there is still plenty more work to be done.

Arsenal, after all, finished 37 points behind champions City last season and down in sixth place, closer to the bottom of the table than the top. Those huge gaps aren't closed over the course of one summer.

And, as Klopp was keen to underline in his own press conference, it was Liverpool who had the best chances on Saturday.

But Emery spoke in the build-up to this contest about wanting to write a new history for Arsenal and in this fixture there were signs his players are embracing the new era, which will have been a pleasant birthday treat for their boss.