Heung-min Son seized his opportunity while Harry Kane was out injured - and can now play a key role in the run-in, writes Peter Smith...

The pair had both made it onto the scoresheet during the FA Cup thrashing of League One Millwall in which Kane was sidelined, with the South Korea international bagging a hat-trick and summer signing Janssen netting his first goal from open play for Spurs.

But four games on - and with Kane back in the fold earlier than expected - only one of those forwards have seized the opportunity presented to them in the star striker's absence. 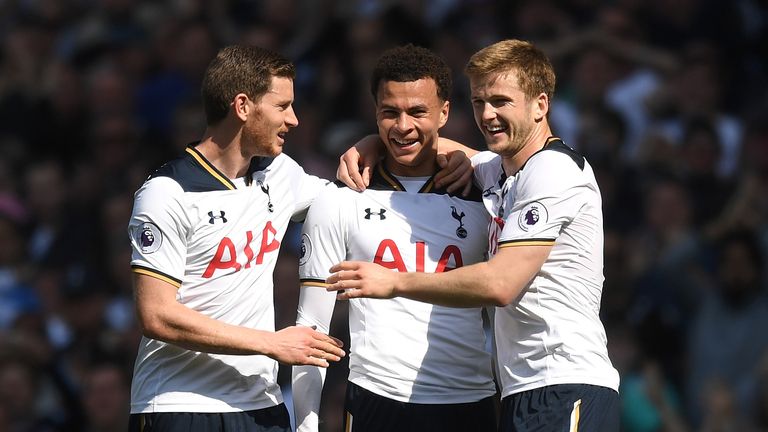 Son scored seven goals and recorded two assists in the 322 minutes of football he played between Kane limping off against Millwall and replacing Janssen against Watford. That works out as one goal contribution every 36 minutes.

In contrast, the Dutchman's fluffed first-half finish against the Hornets, when he contrived to hit the bar from three yards out with the goal at his mercy, rather summed up his struggles at Spurs this season.

Tottenham spent £18.6m on Janssen in the summer but the form which saw him bag 27 goals for AZ Alkamaar in Netherlands' top flight last season has been as frustratingly out of reach as another Kieran Trippier cross was for the forward against Watford.

He remains with just one Premier League goal to his name, after failing to add to his tally during the 183 minutes he was afforded during Kane's absence.

With Kane in the treatment room, Pochettino alternated Son and Janssen in the central striking role but whether deployed as a No 9 or in a supporting position, it has been the South Korean offering the greater threat.

"He was so lively today," Sky Sports pundit Niall Quinn said of Son after watching his starring performance against Watford. "He was working at a speed of knots that other players weren't. Watford couldn't handle him.

"It was questionable whether he could fill the void when Harry Kane got injured but he hasn't looked back. It's the best time in his career and he's been superb."

Given Son's thrilling form, it would be easy to overlook the fact he hadn't found the net or teed up a team-mate in any of his previous seven appearances before filling his boots against Millwall.

It was questionable whether Son could fill the void when Harry Kane got injured but he hasn't looked back.

With the added responsibility he's been afforded in Kane's absence, and with the confidence of that cup hat-trick behind him, the 24-year-old has been transformed.

Son really should have had his first Premier League treble against Watford; he shot wide when through one-on-one and cannoned an incisive Kieran Trippier pass against the bar late on, after two smart finishes. "I'm upset because I had so many chances," he told Sky Sports afterwards.

But he could still afford a smile, in the knowledge he had made another key contribution in Tottenham's superb recent run of results. After all, it's six wins in a row now for Spurs since the 2-0 defeat at Liverpool, and a record 11 straight at home.

Pochettino was eager to talk up the importance of the squad when asked about Kane's return after the game but the Tottenham manager made it clear in his pre-match press conference that the England ace would come straight back into the team when fully fit.

That will have been ominous news for Janssen, who will surely now struggle to add many more Premier League minutes to his total for the season. But for Son - described as a "workaholic with a brain" by Quinn - there will be a place of importance in the line-up during the run-in.