After a thrilling start to life under Pep Guardiola, Raheem Sterling can begin to put his Euro 2016 woes behind him with England in Slovakia, writes Peter Smith...

The winger was much-maligned throughout the summer's European Championships and dropped for the group-stage clash against these opponents after being hooked off at half-time against Wales. Restored to Roy Hodgson's starting line-up against Iceland, Sterling's tournament - along with that of his team-mates - ended in embarrassment.

A fresh season offers a fresh start, though, and under new Manchester City manager Pep Guardiola Sterling has received just that. With two goals and three assists to his name in five appearances, the 21-year-old seems transformed from the confidence-shorn scapegoat of barely two months ago.

Sterling starred against West Ham last weekend, picking up the man of the match prize after scoring twice in a 3-1 win. It was a performance reminiscent of the best days of his career so far, when he flourished in Brendan Rodgers' Liverpool side of 2013/14.

He's never dribbled successfully at his opponents as frequently as he has done at the start of this season, never drawn so many fouls from the opposition. In fact, he won five free-kicks against West Ham, just one fewer than he did in an extra 103 minutes at Euro 2016.

It's a sign of his returning belief in his ability to take on and beat his man. A characteristic which was sorely lacking at the finals.

Jamie Redknapp, critical of Sterling's previous output ahead of the West Ham match, was impressed. "I said before the game: Raheem Sterling, can he get more goals, more assists, can he have more of an impact on the game? Well, that today is what you want from him. He was exceptional and he's setting such high standards. From England's point of view it's such good news."

Indeed, Sam Allardyce may want to send a word of thanks to Guardiola for reinvigorating one of England's most precious talents.

The Spaniard is typically modest about his contribution. Asked what he has done for Sterling, Guardiola said: "Me? Nothing. I have tried to do the best for all the players, not just Raz. But of course we are so pleased, so pleased about his spirit. He can play right, left, he is so dynamic, so aggressive with the ball and without the ball. I am so happy he is playing good."

Of course, Guardiola has had a major influence and Sterling has bought into the Spaniard's methods. The aggression without the ball Guardiola speaks of is a non-negotiable pre-requisite of earning a spot in his team and Sterling is averaging a career-high two tackles per game this season.

By helping his team-mates win back possession high up the field - and Sterling re-gained the ball against West Ham more times than any of his City colleagues, bar Fernandinho and Gael Clichy - Sterling is creating opportunities he and his fellow attackers can profit from.

His placement when City are in possession, in line with striker Sergio Aguero but between the opposition full-back and centre-back, is another interesting tweak, creating one-on-one situations in dangerous areas.

They are tactical methods associated with Guardiola. But it would also seem the coach's man management skills have also played a significant role.

From the very start, Guardiola has backed Sterling. He reportedly phoned the player during the Euros to offer encouragement and then enthused about Sterling's ability and his excitement at working with the former Liverpool ace in his first Man City press conference. 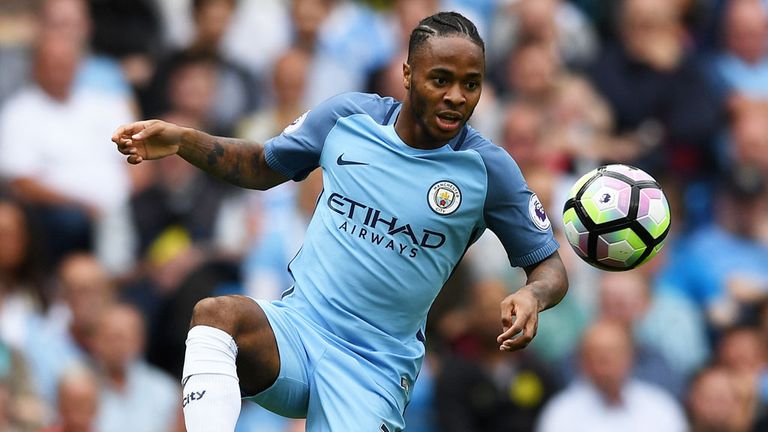 The manager has come in this season and given us a lot of encouragement. He's given me a lot of authority to go forward. Credit to him for giving me that boost.

The positive relationship has continued into the early weeks of the season and Sterling is repaying that faith in him.

"The manager has come in this season and given us a lot of encouragement - not saying that Manuel [Pellegrini] didn't," Sterling told Sky Sports. "He's come in and given me a lot of authority to go forward. He even had a go at me in the first half for not dribbling as much as I should do. Credit to him for giving me that boost."

Without Sterling, England dominated Slovakia at Euro 2016 but, against a team content to take the point they needed to qualify, Hodgson's side laboured in the final third and failed to convert any of the 29 shots they took at goal.

They are unlikely to conjure up so many openings in Trnava. Instead, Sterling's pace and "dynamic" play, as Guardiola calls it, could be the difference.

After hashtags about being 'The Hated One' and fan campaigns to fly him home from France, the scars of the summer won't heal quickly for Sterling. It will take him time to win back favour from many England supporters.

But, revitalised under Guardiola, Sterling can help kick off the Allardyce era and England's road to Russia on a positive note. And begin his own journey on the road to international redemption.

Watch live Premier League football, the Ryder Cup, and the last eight races of the F1 season for three months half price