St Johnstone, who won the domestic cup double last season, drew the first leg of their Europa League third qualifying round tie against Galatasaray 1-1 in Istanbul; McDiarmid Park heading for a sell-out 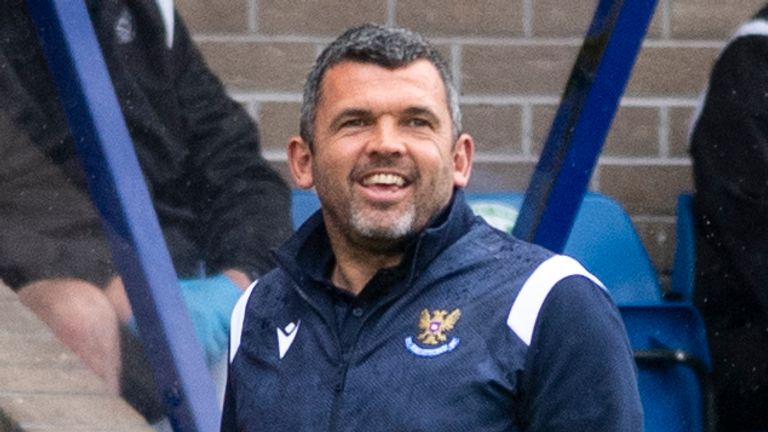 St Johnstone boss Callum Davidson has described Thursday's clash with Galatasaray as a match of "huge magnitude" for the Perth club.

Saints, the Scottish double cup winners, host the Turkish outfit in the second leg of their Europa League third qualifying round tie, having drawn 1-1 in last week's initial encounter in Istanbul.

With a capacity crowd permitted, McDiarmid Park has been heading for a sell-out for the fixture.

The winners of the tie will vie with Danish club Randers in the play-offs for a Europa League group-stage spot, while the eliminated side will transfer to the Europa Conference League play-off round.

Davidson said at his pre-match press conference on Wednesday: "I notice the buzz about the place, everyone is working unbelievably hard behind the scenes to get ready. It's a game of huge magnitude for St Johnstone.

"For a club like us, to be challenging against Galatasaray, who are probably one of the sort of powerhouses of Europe... It's a big challenge, a huge game and I think we're all looking forward to it.

"We're delighted we managed to take them back to McDiarmid with a chance. They are all buzzing, I just need to calm them down a little bit!

"European nights, under the floodlights at McDiarmid with a full house - I think all St Johnstone players, fans, myself, coaches, the hierarchy, it's what we want, what we want to remember.

"We need to play the team, enjoy the occasion, and that's what we'll try to do on Thursday.

"We need to make sure we play against a team, rather than play the occasion, and that we're focused right. If we do the right things and try to perform to a high level, it gives us a small chance to get through.

"Galatasaray undoubtedly are the big favourites, but it's sometimes good being the underdog, the pressure is on the other team to go through."

The first leg saw St Johnstone take the lead against Galatasaray - winners of the UEFA Cup in 2000 under current boss Fatih Terim - via a 58th-minute Jason Kerr penalty after home goalkeeper Fernando Muslera was sent off before Sacha Boey equalised two minutes later.

Davidson said: "I think a lot of people realise how good a result that was. It is going to be so tough on Thursday night.

"A club like St Johnstone, who have 2,700 season tickets, compared to a team like Galatasaray, who have millions and millions of followers... If we manage to get any sort of result, that will be a phenomenal achievement for us.

"We know what we've got to do, and I just want to give the guys the freedom to go and play, express themselves, enjoy it, try and work on good shape and the work ethic we've had for a year, and you never know what happens."

Davidson said skipper Kerr, who missed Sunday's 1-1 cinch Premiership draw with Motherwell, "should be good to go" for Thursday's game.