Christian Eriksen's agent says the midfielder is "making jokes" in hospital but wants answers from doctors after suffering a cardiac arrest during Denmark's Euro 2020 opener.

Eriksen was given emergency CPR on the pitch during Saturday's game against Finland, which was temporarily suspended as the 29-year-old was taken to Rigshospitalet, a hospital near Parken Stadium in Copenhagen.

Denmark team doctor Morten Boesen said Eriksen was "gone", but swift treatment on the field of play and by hospital staff meant the midfielder was stabilised, and he was later able to send his greetings to team-mates.

Martin Schoots, Eriksen's agent, told Italian outlet Gazzetta on Sunday that the Dane is in good spirits, and is "happy" after seeing the support he has received from around the game.

"We spoke this morning [Sunday]. He was making jokes, he was in a good mood, I thought he was well," Schoots said.

"We all want to understand what happened to him, and he does too: the doctors are making some in-depth tests, but we'll need some time.

"He was happy, because he understood how much love he has around him. He received messages from the whole world. And he was particularly struck by those in the Inter environment: not just his team-mates who spoke to him in their private chat, but also the fans.

"Christian won't give up. Him, and his family, want to make sure that everybody receives their thanks. Half the world contacted us, everyone was worried. Now he only needs to rest, his wife and parents are with him.

"Even tomorrow [Monday], he will remain under observation, maybe Tuesday as well. But in any case he wants to support his team-mates against Belgium."

Denmark goalkeeper Kasper Schmeichel said it was "so damn nice" to be able to visit Eriksen in hospital, adding that the experience has helped him after the traumatic events of Saturday afternoon.

"It was damn nice to see him smile and laugh and be himself and just feel that he is there," Schmeichel told broadcaster DR. "It was a great experience and something that has helped me a lot."

Schmeichel says he and his countrymen are now determined to win the Euros for the former Spurs man.

"We're still in the tournament," he said. "Now, we have to try to see if we can win this and do it for Christian and do it for all the fans who sat with us and were just as powerless in the situation as we were.

"I have no doubt that this team has the unity, the strength to be able to come together and go out and do something special."

Schmeichel's father, Peter, claimed Denmark's players did not want to restart the game against Finland, which Kasper appeared to agree with.

"We were put in a position I don't think we should have been put in," the younger Schmeichel said. "It probably required that someone above us had said that it was not the time to make a decision and maybe should wait for the next day."

What is CPR and how did it save Eriksen's life?

The swift intervention of Simon Kjaer and the medical staff saved Eriksen's life.

"[Eriksen] was gone," Denmark's team doctor Boesen said. "We did cardiac resuscitation, it was a cardiac arrest. How close were we to losing him? I don't know but we got him back after one defib, so that's quite fast."

Eriksen's sudden collapse prompted Kjaer to clear his team-mate's airways and start the life-saving CPR technique, which was continued with the aid of a defibrillator and professional medical staff.

Fortunately, the Denmark captain's first aid skills proved vital and Eriksen is now recovering in hospital and considered to be out of danger.

CPR is quite easy to learn and it can be the difference between life and death before emergency medical services can arrive to help out.

So what is it, how does it make a difference and how should you behave if you find yourself in an emergency? 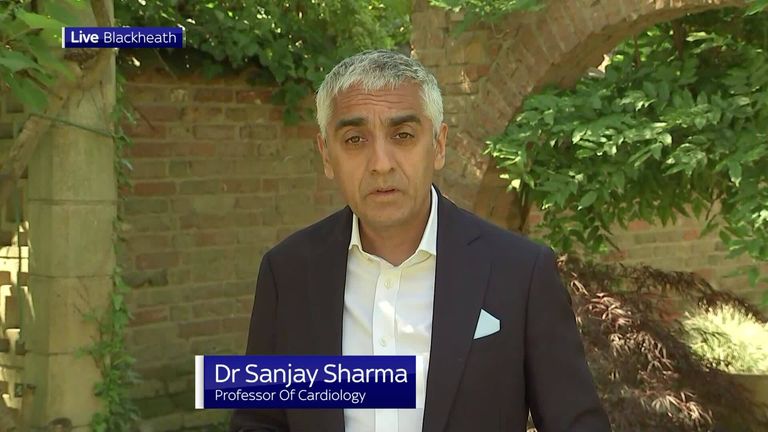 Dr Sanjay Sharma, a sports cardiologist at St George's Hospital who worked with Christian Eriksen at Tottenham, says the speedy response of the medical team on the field was critical for his recovery.

Why is CPR so important? Fabrice Muamba says Christian Eriksen's health and wellbeing is the most important thing, after the Denmark midfielder suffered a cardiac arrest.

"Time is myocardium, that's what we say in medicine - that means the longer that there is a time delay, the higher the chance that the heart muscle will never recover," Professor of Cardiology Dr Sanjay Sharma told Sky Sports News.

"In fact for every minute that passes, the chances of an individual surviving go down by between seven and 10 per cent. So it's very, very crucial to keep the heart beating during these crucial moments and get the heart started as quickly as possible.

"Not just so that the cardiac outcome will be good, but also that the other organs, such as the brain, remain well perfused so that the individual after survival remains healthy."

How do you perform CPR?

The NHS's advice to carry out chest compressions is as follows: 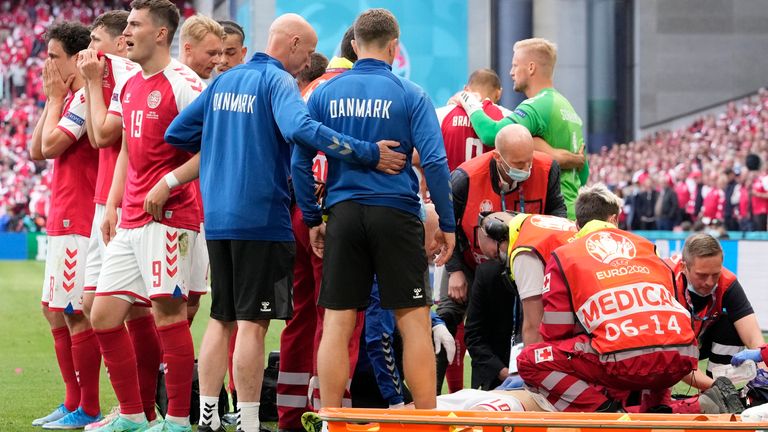 "In many ways, Christian has reacted to CPR and defibrillation in the way we would have expected Fabrice to," he told Sky Sports News.

"We were obviously really disappointed and surprised that Fabrice didn't come around so quickly, fortunately by continuing CPR and other advanced resuscitation efforts we managed to save Fabrice, but after being unconscious for a much longer time.

"The norm is what happened with Christian, that if CPR is started effectively you have early access to defibrillators and get a positive result.

"I think it's just another example that everybody should recognise the importance of early CPR, learn how to do CPR and make sure that you have defibrillators available quickly."

For more information on FA medical courses which can help to deal with such things as cardiac arrest and how to treat them, visit the FA Bootroom.