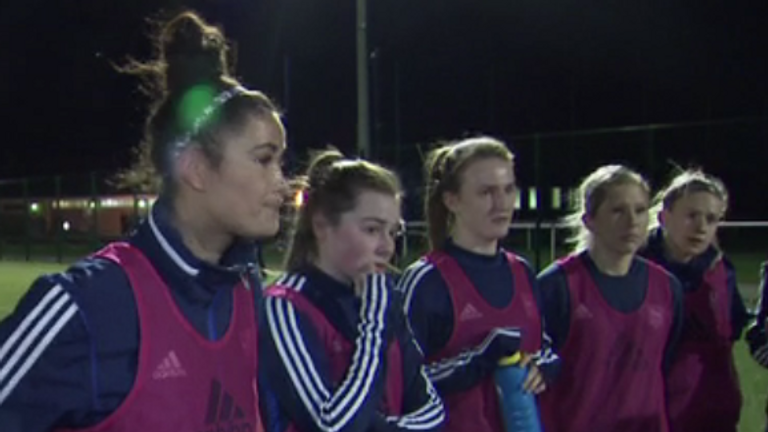 Ipswich Town Women believe they can beat holders Manchester City when they become the first team from the fourth tier to play in the FA Cup fifth round this weekend.

The Tractor Girls are part-timers with many of the side aged 17 or younger, but they face a side on Sunday brimming with professional internationals.

"The gulf between the two teams is absolutely huge," manager Joe Sheehan told Sky Sports News ahead of the match at City's Academy Stadium.

"We've got one of the best teams in the world full of England senior internationals among other countries, against a team that are young, hungry, ambitious and fearless.

"We believe we can go there and get a result because I think we have to.

"The moment we don't believe and we aren't positive then it could be a long old day for us."

Ipswich have won six ties to reach the last-16 match and play the WSL holders.

Along the way there have been victories against Chichester, Huddersfield, Portsmouth and local rivals Norwich, who they beat 6-1.

Sheehan added: "If you look at the game against Chichester it was about £700 for the victory and we paid £900 for our coach so we were at a bit of a deficit for that but the more we've progressed the better we've tried to do.

"Looking ahead to Manchester City on Sunday we're trying to travel on a better coach, we'll be staying at a nicer place, we're trying to feed the players prior [to the match] and that comes at even more of an expense.

"So the more we progress the more we seem to be spending but it is what it is at the moment."

Paige Peake, 17, is one of the students in the team but she appears undaunted at the prospect of playing against such illustrious opponents.

"I'm absolutely buzzing for it," she told Sky Sports News. "It will be unbelievable to play against the likes of Steph Houghton and Ellen White if they play, to play against people where I have aspirations of getting to, they've gone to World Cups, they've played at Wembley."

Captain Amanda Crump, who has been at the club for 14 years, added: "I'm very excited. It's an absolute honour to play for Ipswich Town against such a huge team, against some of the Lionesses, it will be great challenge for us."