Campaign raising awareness around disparity on IVF funding for same-sex couples gathering momentum; "I decided to use my football platform to try to make a difference," FIFA ref Pearson tells The Women's Football Show

By Jon Holmes and Hannah Wilkes 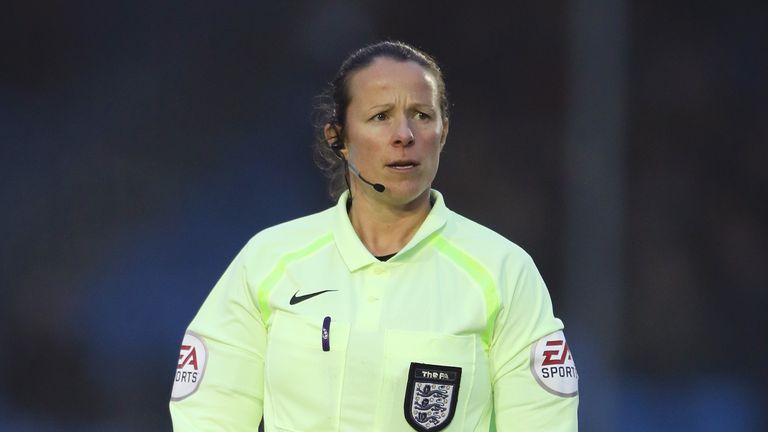 Stacey Pearson, the WSL and FIFA referee who is campaigning alongside her partner for a change in the law on IVF funding for same-sex couples, has thanked the football community for supporting their fight.

Over 33,000 people have so far signed a petition asking for a discussion in parliament over the disparity in NHS thresholds for fertility treatments in England when compared to Scotland, Wales and Northern Ireland, and for greater consistency to be introduced amid an ongoing 'postcode lottery' that exists for same-sex couples and not those in heterosexual relationships.

Pearson and partner Danielle Beazer have suffered two miscarriages and a further failed IVF cycle in recent months, with treatments costing the couple thousands of pounds.

Pearson played midfield for Yeovil for almost a decade before later moving into officiating, while Beazer is a former Bristol and Keynsham defender.

As a result of their experiences, their knowledge of the complex landscape facing would-be mothers in same-sex couples in England has grown considerably, and their campaign is aimed at helping others in similar scenarios who are attempting to navigate the system.

Speaking to Sky Sports' Hannah Wilkes on The Women's Football Show, Pearson says the support shown to her and Beazer from across the game has been particularly encouraging.

"I was quite shocked actually at the uptake straight away," said Pearson.

"Even today, I've got more people saying I didn't realise just how many attempts you had to have before being considered for funding on the NHS. It seems a little bit unjust.

"I decided to use my football platform to try to make a difference for other same-sex couples coming through, because it's not been an easy journey for us."

Pearson detailed the "devastating" impact of the couple's miscarriages and the confusion caused by the differing rules on fertility treatment in each of the four Home Nations in an interview with Sky Sports during Lesbian Visibility Week in April.

"There are loads of different stories that people have told us since we've gone public with it, of how they've had similar treatment," added Pearson.

"There's one that I found out of a couple that had three failed cycles of either IVF or IUI. They went to try and get some funding from the CCG (Clinical Commissioning Group), and were rejected.

"However because one of the women had fertility problems, if she had gone on her own and not gone as part of a same-sex couple, she would have been accepted. How is that fair?"

In advance of Mental Health Awareness Week, starting on May 10, Pearson hopes to encourage more people in sport to discuss the challenges they face in life and invite the wider community to show their support and seek positive change.

"A lot of people go through things in silence, things they don't talk about," said Pearson.

"We want to help. There are a few things we'd have done differently, with hindsight. We want to make people aware of the whole picture.

"It's really important that we stick together, no matter our roles in football. We all want to make a difference to our community."