Ahead of the New York derby - live on Sky Sports - we assess how Patrick Vieira has done so far in charge of New York City FC.

Vieira took the New York City FC job in January with the objective of leading the Major League Soccer franchise to their first ever play-offs after predecessor Jason Kreis had managed only an eighth-place finish in the club's inaugural campaign.

Ahead of Saturday's Rivalry Week clash with the New York Red Bulls, we take a look at how the former Arsenal midfielder has done so far...

The expectation levels at New York City FC are high; the club has financial backing from Manchester City's holding company, City Football Group, as well as Yankee Global Enterprises, who own the iconic baseball club the New York Yankees.

Vieira's brave decision to step into football management led him to New York City, and was selected by director of football Claudio Reyna. Like Vieira, Reyna spent playing time at Manchester City and he wanted to appoint the former elite development squad's coach to lead the MLS club.

What is MLS rivalry week?

This week pits together the fiercest rivals in the league, meaning many high-profile matches...

Vieira was announced as the new head coach on November 9 last year and took charge on January 1.

Former Spain international and ex-Valencia, Barcelona and Atletico Madrid striker David Villa joined the club at the start of last season and was an immense success.

He scored 18 goals in 29 MLS appearances in his first season. However, Andrea Pirlo and Frank Lampard both joined in the summer last year, and had less than successful starts to their respective careers stateside.

Vieira's first job would be to successfully integrate the new stars into a workable system while also building a strong supporting cast around them.

His first signing was Englishman Jack Harrison as the first pick in the 2016 MLS Superdraft. Unfortunately for the 19-year-old from Bolton, injury has meant he is yet to make a first-team appearance for the club.

In total, Vieira had helped to clear out 11 players from their squad and brought in 10 new players. With a predominantly new-look line-up, it would come down to how Vieira would fit the pieces together and whether he could engineer a team that would pick up results.

As it stands, New York City are currently top of the Eastern Conference standings on 17 points after 12 matches. City have won four, drawn five and lost three games under Vieira as they currently lead the way in the Eastern standings.

Their season kicked off in a frantic fashion as they won 4-3 against Chicago Fire, another team currently undergoing transition. However, City went on a winless run of seven matches without a win, drawing four and losing three matches.

The last draw of the seven-game run, a 1-1 result against Montreal Impact, seemed to mark a turning point as they went on to win three games in a row with victories over Vancouver Whitecaps, D.C. United and Portland Timbers before earning a hard-fought away point against Toronto FC on Wednesday.

Results overall, then, have been positive, and intriguingly they've been successful without one of their designated players in Lampard, who has been out with a calf injury.

He reportedly could be set for a return on Saturday night but where he fits into the team tactically is up for debate. The midfield three now looks settled with Pirlo acting as the sole holding player, though Vieira showed his strength of leadership by deciding to drop the Italian playmaker for his poor performance on April 23.

What they say about him

Lampard, talking to Sky Sports before the beginning of the season, praised Vieira for mucking in.

"Fair play to him because people who have been great players don't always want to go and do the dirty work," he said.

"He's worked with the kids on cold Manchester mornings at the back of the training ground. I've seen them do it and he's certainly earned his stripes there. For us, I hope he ups our level. The players will respect him and when he speaks they will listen because of what he's done in the game."

NYCFC captain Villa backed Vieira after their seven game winless run. "It's mentality, it's on us," Villa said. "The coach says all the right things. We played very well and how the coach wants." 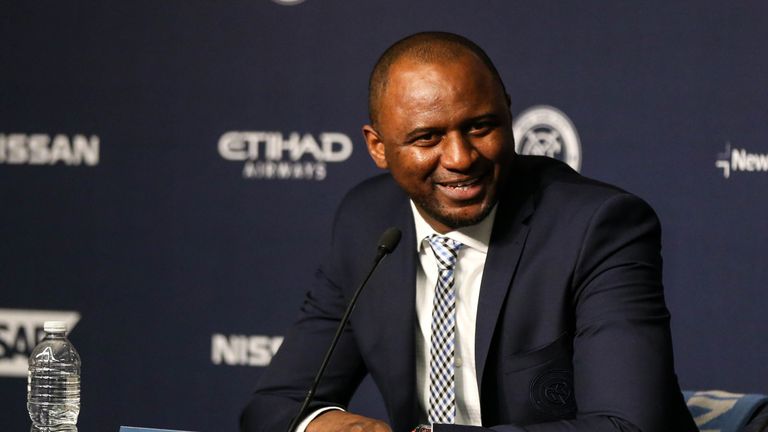 I’m happy here, I have a great team and a great staff. Now all I have to do is win.

At the start of the season, Viera declared: "I'm happy here, I have a great team and a great staff. Now all I have to do is win."

And after their winless streak was extended to seven games after the 1-1 draw v Montreal Impact, he backed his players to recover: "We are in a period where everything is going against us, but we will stick together, we will fight together and we will turn it around. We showed that by the way we played tonight.

On dropping Pirlo for the Philadelphia Union game on April 23, he said: "It's my decision. I'm just trying to choose the best team to win football matches, regarding the team we're going to play against - on how we can hurt them and how we can defend their strengths."