Match report as Rangers lose a two-goal lead at home to Motherwell; a Mugabi own goal and Sakala strike had them ahead at the break; goals from Roberts and Woolery earned Motherwell a point; Rangers remain three points behind Celtic in the Scottish Premiership title race. Highlights of the Scottish Premiership clash between Rangers and Motherwell

Rangers failed to narrow the gap on Scottish Premiership leaders Celtic after losing a two-goal lead to Motherwell at Ibrox.

But Rangers lost their spark after the break as substitute Jordan Roberts tapped in before Kaiyne Woolery equalised to earn a point that moves Motherwell up to sixth.

Celtic's goalless draw at Hibernian earlier on Sunday had given Van Bronckhorst's side the chance to reduce their lead at the top of the Scottish Premiership to a point.

The hosts were again without Aaron Ramsey, while Ryan Jack dropped out on his 30th birthday. Glen Kamara came into midfield and John Lundstram started in central defence.

Motherwell manager Graham Alexander, who had to watch the game from the stands amid his touchline ban, made five changes. Kevin van Veen was among the absentees as he nurses a shoulder injury while captain Stephen O'Donnell earned a recall in Motherwell's back four.

Motherwell struggled to get to grips with the hosts in a one-sided opening and Morelos hit the bar inside 90 seconds.

Liam Kelly made excellent diving stops from James Tavernier and Lundstram, who also headed wide from eight yards, and Rangers regularly threatened with balls from the right towards Morelos.

It was from this source that Rangers took the lead in the 22nd minute. Ryan Kent drilled in a cross towards the Colombian, who had his back to goal and was closely marked by Mugabi. As the pair challenged, the ball flew inside Kelly's near post.

Kent had a major hand in the second goal when he drove into the box. The ball broke for Sakala in space and the Zambia international drilled first time into the far corner from 14 yards.

The chances dried up but matters could have been worse for Motherwell going into half-time after Joe Efford escaped with a yellow card from Don Robertson after catching Connor Goldson with his studs when the pair were on the ground.

Efford was one of three Motherwell players who made way at half-time, with Roberts coming on along with on-loan Celtic midfielder Liam Shaw and Justin Amaluzor.

Kelly soon made a good stop from Tavernier but Motherwell got back in the game in the 52nd minute. Kaiyne Woolery emphatically beat Lundstram for pace to get round the outside and drill over a cross which Roberts tapped in.

Morelos was twice denied goals by the offside flag and Kelly stood up to Kent's powerful strike to keep the Ibrox crowd on edge.

And the tension ramped up when Woolery made the most of a hopeful ball into the box in the 76th minute. The wide man made space under pressure and stabbed a shot inside the near post.

Motherwell brought on centre-back Sondre Solholm for winger Amaluzor as they defended their point.

Ricki Lamie, Dean Cornelius and Jake Carroll all produced excellent penalty-box blocks and Kelly denied substitute Kemar Roofe before gratefully gathering as Goldson failed to make the most of a loose ball. 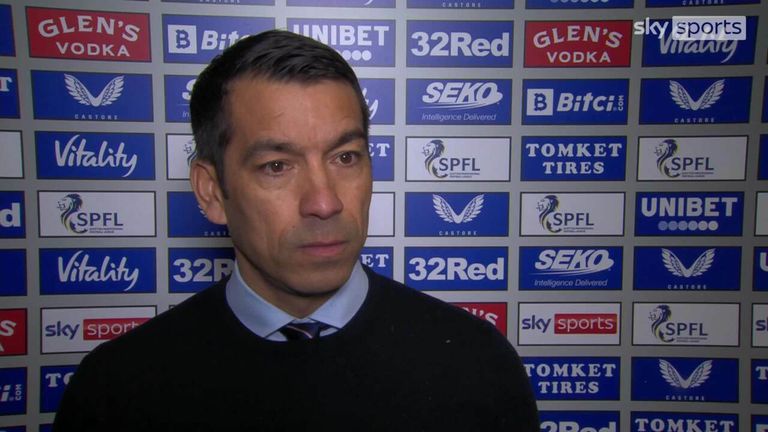 Rangers manager Giovanni van Bronckhorst says that his side could of put the game to bed in the first half against Motherwell and was disappointed that they dropped two points in the title race.

"Very disappointed. We started the game really well and could have won the game in the first half with all the chances we created, but only scored two.

"You have to be ruthless in your defending and clinical with the chances you get, we have to be defensively much more solid.

"We know the run in will be very important for us. To lose two points at home to Motherwell in a game you should have won is very disappointing."

"We said at half-time about showing respect but not fear, maybe the first half there was a little bit of fear from some of our players.

"We asked them to show belief in themselves - they are good players, they can handle the ball. And second half they responded in the way that we wanted."

"Every single player was putting their body on the line, it was a performance full of grit and steel for those last 15 minutes."

Rangers are away to St Johnstone on Wednesday night, live on Sky Sports.

Motherwell host Ross County on the same night as part of a full Scottish Premiership card.