Man City go into the international break fighting on four fronts for an unprecedented Quadruple after making it through to the FA Cup semi-finals with a 2-0 win at Everton; Pep Guardiola keen to point out that City have won 34 of their 39 games since the November international break 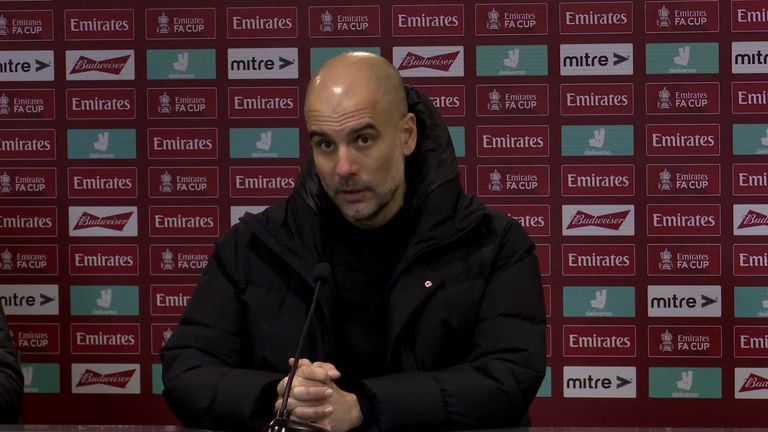 Pep Guardiola says Manchester City's form over the past four months is among their best achievements during his time at the club, given their packed schedule.

City go into the international break fighting on four fronts for an unprecedented Quadruple after making it through to the FA Cup semi-finals with a 2-0 win at Everton on Saturday night.

Guardiola was keen to point out that City have won 34 of their 39 games since the November international break, and although no silverware is secured, the Spaniard was lost for words for the feat.

"Honestly, since the last international break, we played 39, won 34, drawn two, lost three, one of them was Porto away when we'd already qualified.

"In this winter time, four months, playing every three days, it's incredible commitment. I don't have any words to express that, and in this period, after one game we cannot even enjoy because three days later there is another.

"It's not just about tactics and skills, it's mental, to be ready every game. What we have done is more than remarkable, it's incredible. One of the greatest achievements we have done together for a long time.

"Of course we have not won anything, and we will be focused for the rest of the competitions. We will see how far we arrive in those competitions."

City left it late for their 25th win in 26 games - top scorer Ilkay Gundogan netted the first with six minutes remaining, before sub Kevin De Bruyne's strike in the 90th minute - and Guardiola had earmarked this game as a major hurdle in their quest for multiple pieces of silverware.

He told BT Sport: "I saw the warm-up Everton have done, we saw the commitment and how focused they were. They defended really aggressive in a good sense. Really, really tough. But we were patient, conceded nothing, and at the end we won.

"One of the toughest games we have played in the last four months, since the last international break."

Guardiola also said in his post-match press conference: "All the players were fantastic, all of them. It's an incredible compliment to the team, because we knew this was one of the toughest games we had left to play this season."

Guardiola now sees the majority of his squad travelling for international duty, having previously feared that these international fixtures could see a rise in Covid cases.

"I hope they stay safe and make it back, not just for us but for them," he said. "Of course we are being incredibly controlled in these four months, but hopefully, and we spoke about this, to be careful.

"But we are lucky that in England it is the best country alongside maybe the US that vaccinate a lot of people, which makes our life easier, and hopefully the people who go abroad can come back safe."

Asked by BT Sport if he was concerned, Guardiola added: "A little bit, of course. I hope they stay well, hopefully the people got to the bubbles and control, firstly for the health of the players. But looking forward to them coming back safe."

Asked what he will be doing during the international break, Guardiola said in the post-match press conference: "For the first days I promised I will not think about football, I will not watch games.

"At the end of the first week, start of the second week, we are going to see Leicester and especially Borussia Dortmund."

Ancelotti: City the best in the world 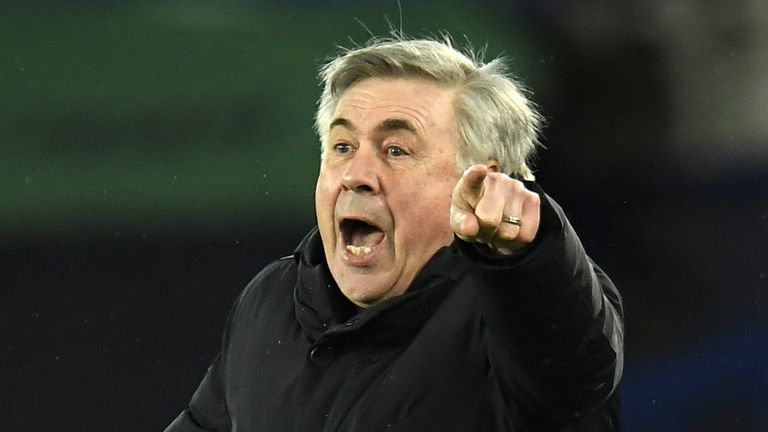 Having kept City out for 84 minutes at Goodison Park, opposite number Carlo Ancelotti was happy with Everton's performance, insisting Guardiola's side are the best in the world right now.

He told BT Sport: "We played the game we wanted to play. We didn't concede space; but they are the best team and have the best bench in the world."

He later said in the post-match press conference: "I think my players have improved a lot this season, and the game today showed there is a different quality, but with strong concentration, good defensive organisation, we are able to compete.

"Man City is not a normal team in this moment, they are the best."

The draw for the semi-final of the FA Cup will take place on Sunday evening after the conclusion of Leicester vs Manchester United.