Kylian Mbappe struck a controversial winner as France came from behind to beat Spain 2-1 to lift the Nations League; Jamie Redknapp: "What is Garcia supposed to do? It's a really poor interpretation of the rule. I don't like it and it feels unfair." 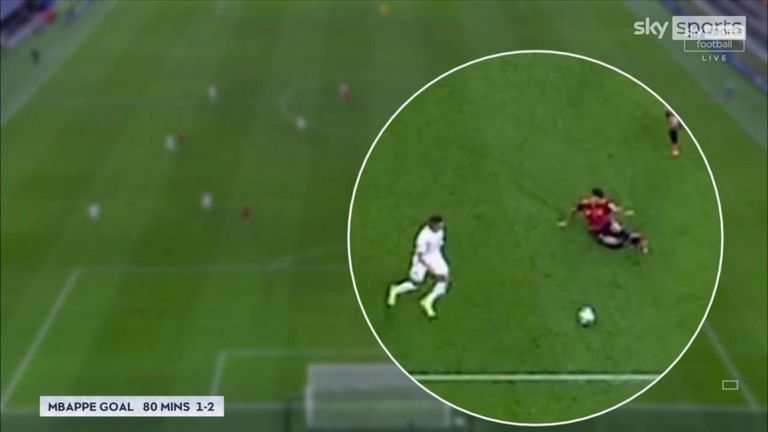 Jamie Redknapp felt Kylian Mbappe's winning goal in the Nations League final should have been ruled out for offside, calling the interpretation of the law unfair

Spain took the lead when Mikel Oyarzabal latched on to a long pass from Sergio Busquets, held off Dayot Upamecano and fired into the bottom corner. The French response was swift, however, with Mbappe finding Benzema who cut inside before unleashing a brilliant curling shot into the far corner to make it 1-1.

Mbappe then grabbed the winner in controversial circumstances 10 minutes from the end, racing on to a through ball from Theo Hernandez and keeping his cool to slot past Unai Simon - but only after Eric Garcia's attempts to intercept the pass played the Paris Saint-Germain forward onside.

It brought back memories of a goal Harry Kane scored for Tottenham in the Premier League against Liverpool in February 2018 when Dejan Lovren attempted to play the ball despite the forward standing in an offside position. Redknapp believes the rule needs to be scrapped.

He told Sky Sports: "It's a really hard one to understand because from Spain's point of view, you're trying to keep a good line. Mbappe has got incredible pace but he gets the timing of his run wrong. It's the slightest of touches from Garcia.

"What the rules say is that it then becomes a second phase of play but what is Garcia supposed to do? Is he meant to just let it go even though he doesn't know what's behind him?

"You can see from the moment Theo Hernandez plays the ball, he's definitely offside. But because of this delicate touch from Garcia, it's a new phase of play. But for me it isn't. It's a really poor interpretation of the rule. I don't like it and it feels unfair.

"It's the slightest touch. It's not like he's tried to play it back to his goalkeeper. As a defence, you keep a good line and you have to somehow get a touch on it. If he put his flag up, no one would've asked any questions.

"It's so contentious. We want to see goals in football, of course we do. We're crying out for VAR to give more goals but this one feels really unfortunate for Spain in my point of view. I do feel sorry for the officials.

"It's not VAR's fault... it's the rule. It's been around for around 18 months this interpretation but I don't feel we've seen enough examples of it in big games for it to be such a talking point but it's certainly won a final today so it'll become a talking point now for sure.

"You can see on Luis Enrique's face how disappointed he is. Spain were so unlucky against Italy in the semi-finals at the Euros and again today. But there were so many positives as well.

"We've had years of waste-of-time friendlies that no one cares about. What are you learning? When you play against great players and put in brilliant young talent, it's such a better spectacle.

"Both teams really wanted to win this tournament. It's been a real success and I've enjoyed all the games at the finals. It feels like redemption for France after such a disappointing Euros." 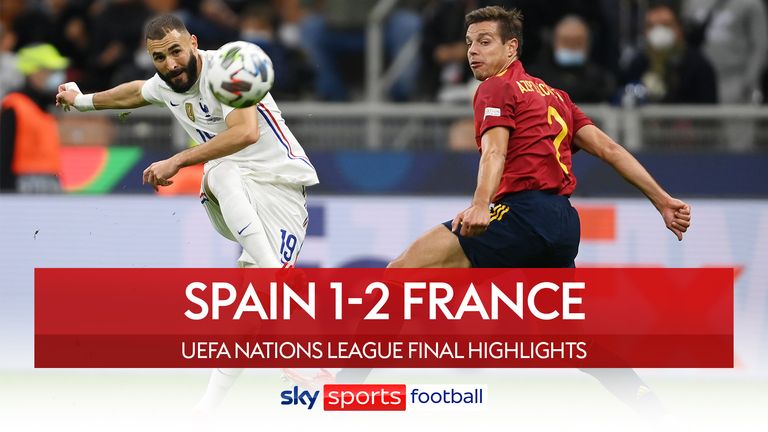 Spain defender Cesar Azpilicueta believes the decision to award the goal was harsh on his side, believing English referee Anthony Taylor ought to have used his pitchside monitor in order to come to his own conclusion regarding Mbappe's goal.

"The referee is there to make decisions but I'm more disappointed that the referee who makes the decision isn't Mr Anthony Taylor, who was here, it's the one who is in the VAR," he said.

"The monitor is there to use it. Every time we have meetings with the referees we say the same, and I don't know why he doesn't go to the monitor and see by himself if it's deliberate play or not. The offside is very clear and the ref watching the reviews in the office says he can't play the ball, but I don't think so.

"I don't know why the referee on the pitch who feels the pace of the game who can make the decision with the monitor."

Ref Watch: It is a goal by the letter of the law 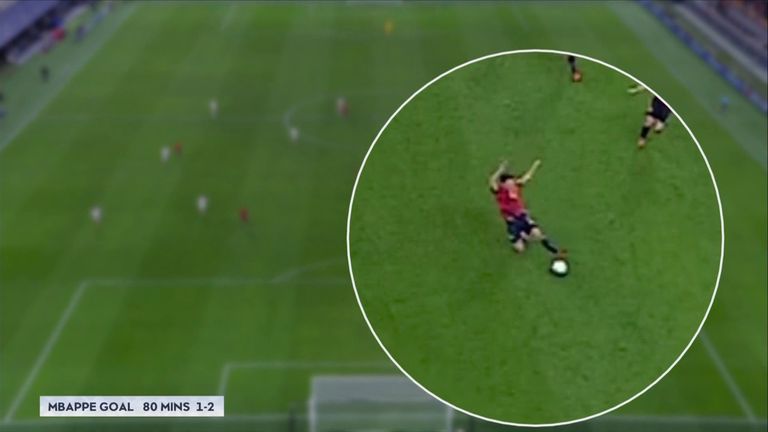 "Technically yes (it was a goal), but what I would say is you asked me many moons ago is there anything I do not like with the laws of the game and without doubt, and many people would agree with me on this, Mbappe is in an offside position.

"Is being in an offside position an offence? No. Does he impact on the defender? Many people would say 'yes' because of where he is, he forces Garcia to play the ball.

"But the law says if Garcia decides to play the ball on his own, which he does, he gets a flick on the ball because he miscontrols it, or does not clear it, it goes to Mbappe and he is deemed onside and that is how it progressed.

"The only thing I can say is the VAR [Stuart Attwell] looks at that, goes through that process, he sees the touch by Garcia, he decides that Garcia goes to play the ball and therefore it falls into that caveat.

"What you would say is if the VAR was not there, it would still have been a goal because the assistant did not flag on the day because it was so tight. So there is a lot of distaste about it from people, but on law it is absolutely correct." Mbappe's strike was the climax to a lively second half which had come after a cagey opening 45 minutes in which Spain's Gavi had once again demonstrated his abundance of talent, controlling the midfield and belying his tender age.

Having only earned his first cap for Spain in the semi-final victory over Italy, he showcased just why a bright future lies ahead of him.

Redknapp was effusive in his praise, saying at the interval: "They have a player in Gavi who, I want to see his birth certificate! You cannot be this good at 17. He's absolutely phenomenal. One of the greatest midfield players I've ever seen live was Andres Iniesta.

"The way he used to receive the ball on the half-turn and let it run past his body was just like Gavi. Although he was small he used to roll away from the players and he had these in-built wing-mirrors that all great midfielders have. He is so talented this kid.

"He's brave on the ball, he picks up positions. At 17 years of age, to be playing in this sort of company, I'm in awe of him. I love watching him play. He's got everything."