Report and highlights as Canaries close on Championship top spot 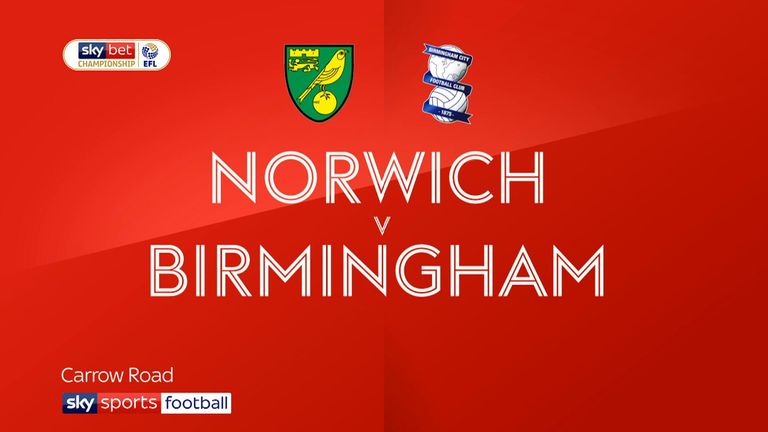 Highlights of the Sky Bet Championship match between Norwich and Birmingham.

Norwich moved to within a point of Championship leaders Leeds after three goals in 13 minutes helped them to a 3-1 win over Birmingham at Carrow Road.

All four goals were scored during a frantic spell which followed a routine opening 12 minutes; Teemu Pukki set the wheels in motion with his 16th of the season for the Canaries (13), but within 80 seconds Che Adams leathered an equaliser for the Blues (14).

Man of the match: Teemu Pukki

Norwich's 15th win of the season moves them above Sheffield United into second, while the Blues' search for a first win at Carrow Road since March 2002 continues.

The last three Championship fixtures at Carrow Road had seen 18 goals scored but, though both sides pressed high from the off, few could have anticipated the dramatic period that, ultimately, shaped the game

From nowhere, Pukki netted a trademark close-range finish when he raced to the near post to guide home Jamal Lewis' cross, but Birmingham hit back immediately as Jota cut in off the right flank and fed Adams, who blasted a shot out of Tim Krul's reach.

It was just seven minutes before Daniel Farke's men edged back in front, and the goal came in style, as Vrancic picked up Buendia's square ball and arrowed a low strike past former Canaries goalkeeper Camp.

The hosts were out of sight soon after. Visibly nursing a thigh injury, one of Buendia's final acts before being substituted before the break was to register his second assist of the evening with his corner allowing unmarked midfielder Trybull to score a bullet header from inside the six-yard box.

Canaries boss Daniel Farke made two changes from the side that drew 1-1 with West Brom last weekend, as Tom Trybull and Marco Stiepermann - who returned from a thigh injury - replaced Todd Cantwell and Alex Tettey - who is set to miss three weeks with an abductor strain.

Birmingham, meanwhile, named the same starting line-up that lost 2-1 to Middlesbrough on Saturday.

Onel Hernandez spurned the chance to add a fourth when Maxime Colin recovered from being caught out of possession soon after the restart, while Marco Stiepermann missed a chance of his own when Gary Gardner swiped the ball as he looked to shift it onto his favoured left.

Jota appeared to be the player who would make the difference for Garry Monk's men, but he was withdrawn late on and, with few chances for either side, the game ended without the added-time drama seen in recent weeks.

Man of the match - Teemu Pukki

It beggars belief that few clubs were interested in Finland striker Pukki when he was released by Brondby last season. Norwich picked up the player in the summer and he has repaid their faith tenfold; as of full-time, he sits joint-top of the Championship scoring charts with 16 goals.

He reached the summit in trademark style, turning a cross home at the near post, and with the business end of the season drawing ever-closer, the 28-year-old is perhaps the keystone to the Canaries' promotion bid.

Daniel Farke: "It was a massive win for us, especially without so many key players. We played a terrific first half against Birmingham; it's so difficult to create chances normally, but we created a lot and the game could have already been done at half-time.

"In the second half we changed to a more pragmatic style in order to give them not so many winnings of the ball. We had everything under control, a bit more calmed down and we're pretty pleased about this because we did it with such a young side." 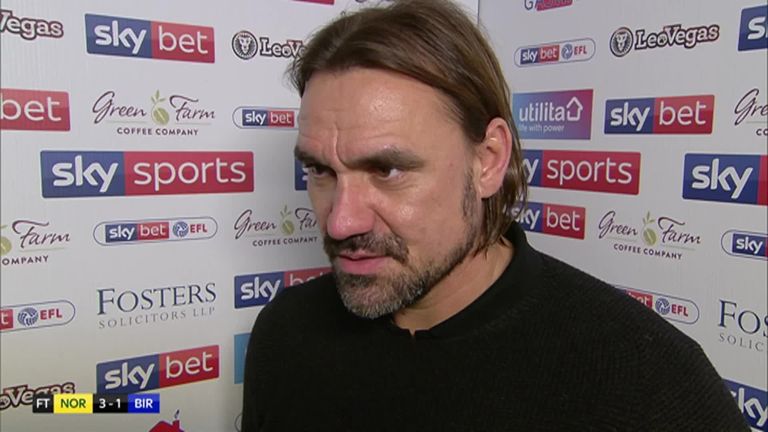 Norwich manager Daniel Farke called his team’s 3-1 victory over Birmingham a ‘massive win’ considering they were missing a number of key players.

Garry Monk: "We can have no complaints with the result, Norwich deserved to win that game. We were off our game tonight, no excuses from our side of it in terms of that.

"We lacked the usual discipline, especially defensively, that we've showed, so that was quite uncharacteristic for us. Then, of course, the usage of the ball, which we are normally a lot better with. In both sides of the game tonight, we didn't do well enough, especially in that first half, and you get punished for that against a good side like Norwich." 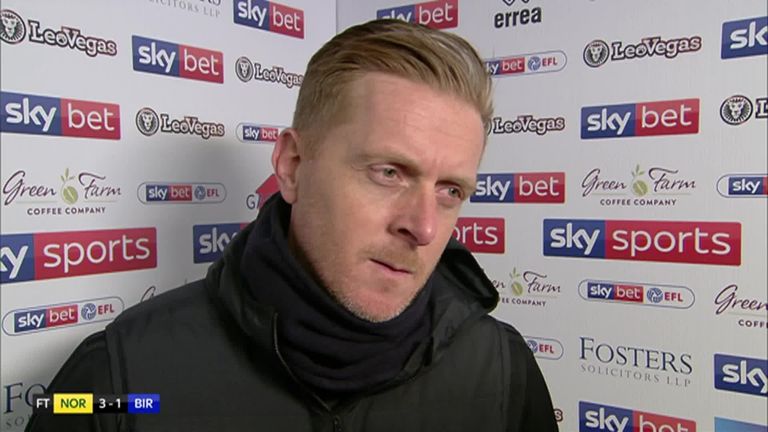 Garry Monk admitted that his Birmingham team were off their game and deserved to lose after Norwich ran out 3-1 winners at Carrow Road.

Norwich must navigate their way past stern opposition in the shape of Sheffield United at Carrow Road next Saturday, while Birmingham travel to Swansea, in a fixture rescheduled due to the FA Cup third round, on Tuesday evening.