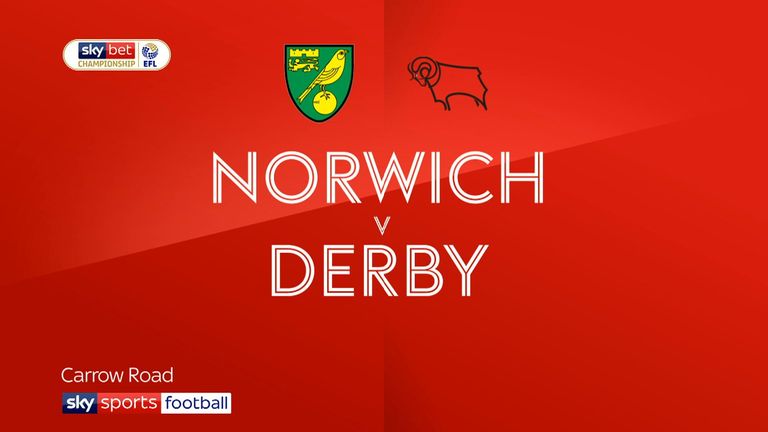 Highlights of the Sky Bet Championship match between Norwich and Derby.

Trailing 3-2 with 10 minutes to go, and with a floodlight failure then delaying the game for 25 minutes, the Rams hit back in superb style.

Florian Jozefzoon equalised a couple of minutes after the resumption and Jack Marriott fired home a dramatic winner on the 90-minute mark.

The hosts seemed to be in complete control after goals from Ben Godfrey and Pukki had put them 2-0 up inside 31 minutes but the Rams were back on level terms by half-time, with Fikayo Tomori and Mason Mount on target.

But Norwich kept their composure and Pukki added his second after 80 minutes to make it 3-2 before more late drama, following Norwich's 3-3 draw with Nottingham Forest on Boxing Day which saw the hosts score twice in injury time to grab a point.

Norwich completely dominated the opening stages, hardly letting the opposition get hold of the ball as they hemmed them back in their own half.

Onel Hernandez tested Scott Carson early on with a low drive that the keeper did well to block and Alex Tettey then fired just wide before the Canaries took a thoroughly deserved lead in the 25th minute.

Mario Vrancic picked out Marco Stiepermann from deep and the big German did superbly to get the ball under control before beating his man and getting in a low cross that defender Godfrey sidefooted home for his first league goal for the club.

It got even better for the hosts six minutes later when they made it 2-0.

This time they caught the Rams on the break after a rare foray forward from the visitors and Vrancic picked out Pukki, who needed just one touch before slipping the ball past an exposed Carson. It was the Finnish frontman's 14 goal of the season.

Derby got themselves back into it after 36 minutes when defender Tomori lashed the ball home off the underside of the crossbar after City failed to defend a short corner.

They almost equalised a couple of minutes later when Marriott burst through, only to be denied by keeper Tim Krul, and after more pressure equalised in first-half injury time.

Once again Norwich were unable to clear their lines at a corner as Pukki dithered, and Mount was on hand to bury a fierce low drive into the net from 10 yards out.

It was Derby who had the next big chance just past the hour mark when Marriott's goalbound shot was deflected just wide after the home side had been caught short at the back.

But it was Norwich who gradually began to take control and had a good chance after a swift break after 77 minutes but Vrancic made it easy for Carson with a scuffed shot.

Tettey then shot high and wide from a decent position before Norwich finally got their noses in front again after 81 minutes.

Hernandez broke free down the right and, after bursting into the box and finding his way to goal blocked, he had the presence of mind to pick out Pukki at the far post and the in-form frontman did the rest.

There was more drama immediately after the goal when problems with the Carrow Road floodlights led to referee David Webb suspending play, with both teams heading back to the dressing rooms with the stadium clock having stopped on 84 minutes and 15 seconds.

It was a worry for the hosts - but the problem was eventually solved and play resumed 25 minutes later, with nine minutes plus injury time left to play.

The Rams were quick out of the blocks on the resumption and equalised after 86 minutes when a quick break into the Norwich box saw substitute Duane Holmes sweep the ball across the danger area for Jozefzoon to bundle the ball home from close range.

And in yet another dramatic Carrow Road encounter, Derby then took the lead, with Marriott muscling his way through before chipping the ball over Krul to make it 4-3.

Norwich almost salvaged a point at the death, with Carson producing a brilliant stop to deny Todd Cantwell before Jordan Rhodes saw an effort hit the underside of the bar before being cleared as Norwich's 12-match unbeaten streak came to an end.

Daniel Farke: "I don't want to use the floodlight problem as an excuse but if it hadn't been for that I am sure we would have gone on and won the game. We had just scored, we had the momentum with us, and the delay gave Derby a chance to take a break and make changes.

"Having said that I was very disappointed with our defending when we came back on the pitch - and we also let them back in the game with poor defending just before half-time when we were in complete control. It is difficult to accept that we have lost this game. For most of the first half Derby just couldn't handle our quality.

"In the end a few minutes of sloppiness in both halves cost us - but there's no doubt we were the better side and deserved to win the game. I am disappointed of course, but overall we can hold our heads high and move forward with confidence."

"I think the delay worked in our favour because Norwich had just scored their goal and the momentum was with them. It was bad timing for them and good timing for us because it gave us the chance to reorganise things and I though David Nugent did a superb job when he came on, playing a part in both our goals.

"Norwich will be saying they deserved something from the game, and they would have (deserved) a point to be fair, but I think we deserved this for the way we came out after the delay. The players deserve so much credit for coming away from a tough place like this with three points."