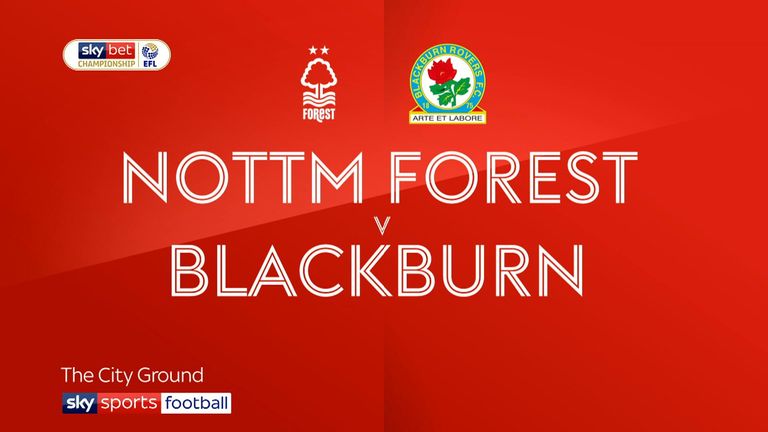 Blackburn recorded their first away win since January as a 2-1 victory at the City Ground all but ended Nottingham Forest's play-off hopes.

Joe Rothwell's fine curling finish put Rovers ahead in the 29th minute at the City Ground on Saturday and Danny Graham made it 2-0 four minutes into the second half.

Ryan Yates helped to pull one back - although the final touch might have come off Rovers defender Elliott Bennett - but Forest fell to a third straight defeat that left them eight points off the Sky Bet Championship's top six with four games left to play.

Molla Wague almost gave Forest a fine start when he saw a powerful strike cleared, after Blackburn had not dealt with a Matty Cash free-kick.

Bradley Dack responded with a long-range effort that was easily saved by Costel Pantilimon before Joe Lolley tested David Raya with a similar effort at the other end.

It was the visitors who took the lead, following a short spell of pressure. Dack had a shot that deflected wide for a corner and, when Forest failed to properly clear, the ball fell to Rothwell on the left corner of the penalty area and he curled a precise shot back inside the far post.

A mistake at the back gave Lewis Grabban a clear sight of goal, but the Forest striker took an age to shoot and had the ball snatched away.

Raya almost cost his side a goal when he dropped a cross but Yates' shot was blocked and Arvin Appiah drove the rebound narrowly wide.

Blackburn made it 2-0 in the 49th minute when Dack helped the ball into the box and Graham produced a trademark finish, lifting a shot high into the back of the net.

Forest mustered an immediate response as Pele looped a cross into the danger zone, where Yates went for a header as Raya attempted to punch. The Forest man celebrated as if he had applied the vital touch, although the last one may have come off Bennett.

The Reds should have equalised when Sam Byram whipped in a perfect cross from the right, but Cash sent a free header over.

A mistake from Jack Robinson gave Dack a free run on goal, but he was denied by Pantilimon before his rebound came back off the frame of the goal.

Forest came agonisingly close as Lolley lifted a cross-shot over the advancing Raya but Daryl Murphy could not guide the ball home from a tight angle.

Substitute Murphy came close again in the closing stages but his header from a Lolley free-kick was cleared.

Martin O'Neill: "There are a number of areas to address in the summer. But you talk about Nottingham Forest and it is a lovely club, a great club. We have not been in the top flight for 20 years and I do not want this to be symptomatic of things.

"The play-offs are a distance away and we cannot talk about that any more. Now we will see what we have about us. Everyone will get a chance to show what they can do and we will get ready for next season."

Tony Mowbray: "We have our own ambitions, which we have fallen away from in the last two months," he said. "We have to strengthen and add depth for next season. If a key player gets injured, we want to have cover for him, as we move forward.

"We feel as though we have let ourselves down a bit over the last two months, because we were on the cusp of the play-offs. But for the last 11 games, we had won one match. We had a soft underbelly and were letting too many goals go in. We needed to acclimatise back in the Championship, with practically the same team that played in League One."