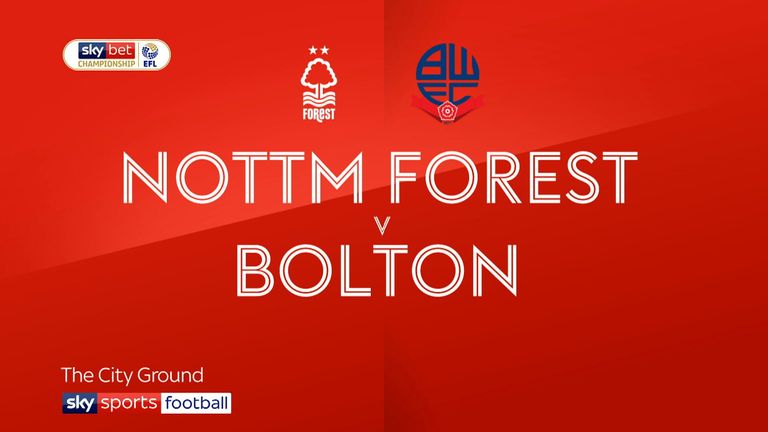 Highlights of the Sky Bet Championship clash between Nottingham Forest and Bolton.

Crisis club Bolton bowed out of the Sky Bet Championship with a whimper as a patched together side suffered a 1-0 defeat at Nottingham Forest.

Martin O'Neill's side notched three consecutive wins for the first time since December 2016 as Joe Lolley's 12th goal of the campaign earned them a narrow victory at the City Ground.

The Reds had more of the ball in the opening exchanges, but it was Bolton who were first to threaten as Harry Brockbank's shot from just inside the box was well blocked.

Forest goalkeeper Luke Steele had to make a decent save, diving low to his right, when Josh Magennis let fly from range.

But it was Lolley who broke the deadlock in the 28th minute. Ben Osborn fired a low ball across the penalty area to the winger, who took a touch before lashing a composed finish beyond Matthews inside the near post to claim his 12th goal of the season.

Sam Byram came close to adding a second from a Cash corner but saw his header loop wide.

This was a typical end-of-season affair and it took 16 minutes of the second half before the game offered up anything of note, with Magennis hitting a shot from range that was always flying high and wide.

Forest sparked back into life as Lolley fed Lewis Grabban in the box. His neat side-step gave him the room to shoot, but his effort was blocked.

Sub Adlene Guedioura also came close to netting a second for Forest, with a driven low shot that Matthews did well to hold.

But Forest were still struggling to find momentum, with Steele having to make a smart save to deny Magennis as he attacked a far-post header with great purpose to preserve the home side's lead.

Martin O'Neill: "We have a lot of work to do. We have improved from last season, which is good news.

"We will look forward to next season, however. We are remarkably upbeat.

"If I was taking the assessment following my 19 games in charge, I would have thought it was roughly where we probably should be, in the table.

"But now we have finished the season with three consecutive wins."

Phil Parkinson: "I think everyone is looking forward to this being resolved, so that we can all move forward.

"I am very proud of the lads' performance today. As everyone knows, we have had some very testing circumstances throughout the whole season but, in particular, over the last few months.

"And to come here and represent the club in the way that they have done - I was very proud of the performance."