Report and highlights from the Sky Bet Championship clash between Nottingham Forest and Preston at the City Ground as Lewis Grabban netted either side of Jack Colback to seal a comfortable win for Steve Cooper's side. 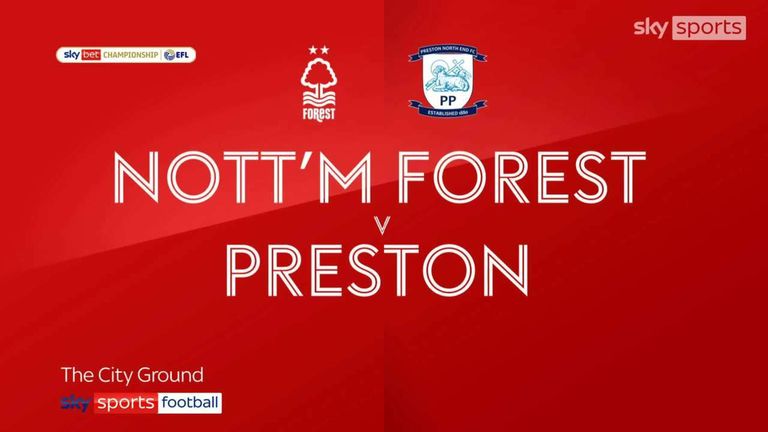 Lewis Grabban scored twice as Nottingham Forest cruised to a comfortable 3-0 win over Preston at the City Ground.

The striker opened the scoring from the penalty spot before Jack Colback's driven volley made it 2-0 just before half-time.

Preston, who had won at Bournemouth in their previous outing, saw Brad Potts spurn two decent chances but rarely offered much threat as Steve Cooper continued his positive start in charge at Forest.

Alex Mighten ensured Forest got off to a positive start when he had a shot charged down in the box in the second minute. And the winger threatened again when he burst down the left and flashed the ball across goal, with Preston clearing desperately.

But it was Preston midfielder Potts who enjoyed the first clear opportunity of the game, as he drove a shot at Brice Samba from 10 yards which the keeper pushed away in awkward fashion.

Patrick Bauer had to be replaced in the 20th minute through injury, with Jordan Storey replacing him, and as the Preston defence reshuffled, Ryan Yates planted a header wide.

Brennan Johnson's pace took him into the box down the right side as Forest pressed again but he tried to pick out Mighten with a pass, rather than having a shot himself.

However, Johnson was at the centre of things as the hosts took a 32nd minute lead. The Wales international was clipped by Ben Whiteman in the box and referee Simon Hooper pointed to the spot, with Grabban keeping his cool to convert the penalty.

Yates came close to making it 2-0 as he hit a shot on the turn which flew across goal and wide.

Forest did double their advantage four minutes before half-time as Preston only managed to half-clear a Zinckernagel free-kick, with the ball dropping nicely for Colback to lash a perfectly struck volley beyond a helpless Iversen from 10 yards.

Preston had more possession in the second half, but the visitors still found opportunities difficult to come by.

And Forest increased their lead in the 70th minute following more good work from Johnson. The winger twisted his way into the box before causing chaos with a cross that was only half-cleared and fell perfectly to Grabban, who saw his shot creep across the line, after hitting the far post, before Iversen could swat the ball away.

Substitute Lyle Taylor might have had another for Forest but, after battling his way through on goal, he lost his footing at the vital moment while Djed Spence also had a spectacular effort saved in the dying moments.

Nottingham Forest's Steve Cooper: "I have seen it back and it is a clear penalty. The irony is that it was probably less of an obvious one than some of the previous penalty claims we have seen in previous games that were not given.

"But I told the players before the game that you have to make your own luck. That comes with a good attitude, with good focus and concentration. We had a game plan and we backed ourselves to go out there and play well. It was a very good penalty from Lewis and he was in the right place for his second. It did sneak in a little bit off the post, but he got a good contact on the ball and it went in, which is all either of us will care about."

Preston's Frankie McAvoy: "Losing Pat 20 minutes into the game didn't help us. But goals change games, along with decisions. I have seen their penalty back and I understand why the referee has given it but it doesn't look like there is much contact there at all.

"We didn't defend well enough, the three goals were all poor ones to concede. We were shot shy and didn't do enough in the final third."