Pedro goes off with injury late in the game

Chelsea started their Europa League campaign with a comfortable 1-0 win over PAOK Salonika on Thursday.

Willian scored the only goal of the game in the seventh minute when he finished from Ross Barkley's pass.

Chelsea were dominant and should have won by a greater margin as Alvaro Morata, Pedro and Willian all spurned good chances.

Man of the match: Willian

However, the Greek side rarely looked like equalising as Chelsea made a winning start in Group L and continued their perfect start to the season.

Playing in the Europa League for the first time since winning the competition in 2012/13, Chelsea struck early as Barkley played through for Willian and he finished past Alexandros Paschalakis. 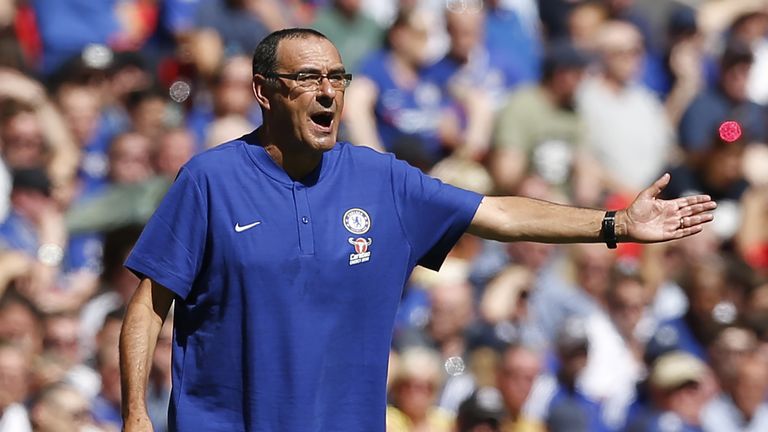 The visitors looked comfortable for the rest of the half, controlling possession but missing chances to extend their lead.

Morata's frustrating season continued as he missed a close-range header and then shot wide, while Pedro was denied by Paschalakis after a quick counter.

The Greek side might have won a penalty late in the half when Barkley tugged at the shirt of a player from a free-kick.

But the incident was not spotted by the referee and PAOK did not come close to scoring after the break as Chelsea continued to control the game.

The only thing lacking was the second goal, with Willian shooting at the goalkeeper and then lashing over from the penalty spot.

With Hazard, Luiz and Kovacic left at home, Morata and Barkley started for Chelsea and Zappacosta and Christensen made their first starts of the season. Ampadu and Hudson-Odoi did not make the matchday squad after travelling to Greece.

Pedro also saw a couple of efforts saved before suffering an apparent shoulder injury late in the game when he was pushed into the goalkeeper's knees as he was sliding out.

Pedro was helped off the pitch by two physios as Chelsea saw out victory.

Man of the match - Willian

Jorginho, Barkley and Antonio Rudiger were solid for Chelsea, but it was Willian who ultimately secured victory. He should have scored again in the second half when he fired over from inside the box, but it was a lively display from Chelsea's captain for the night.