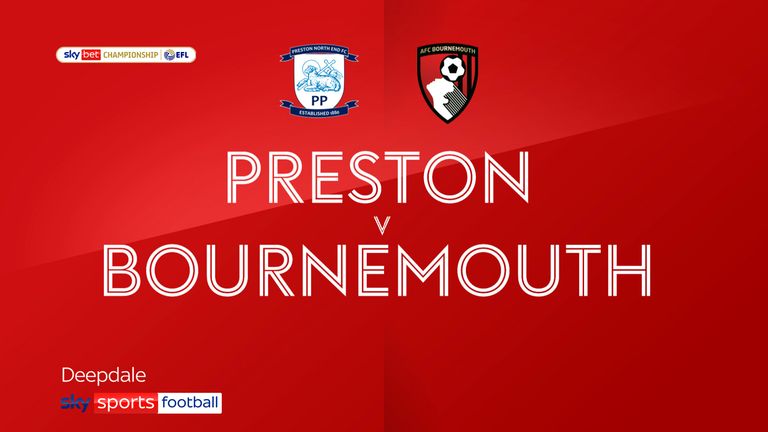 Daniel Johnson's second-half equaliser saw Preston earn a 1-1 draw at home to a Bournemouth side who should have been out of sight at half-time.

Whatever Preston boss Alex Neil said to his men in white at the break certainly worked, with a second-half performance of verve and determination in stark contrast to their uninspired show before the interval.

Nobody in a Preston shirt showed this more than Johnson. Missing through injury earlier in the season, his energy and organisational skills were key to the revival.

And when it came, he took his goal well. Veteran Bournemouth defender Steve Cook attempted a pass that was never on. Johnson intercepted, took a couple of touches and from the edge of the area curled a low shot around Asmir Begovic into the bottom corner.

The Cherries had started the game well. Great work from Arnaut Danjuma saw him lay a ball into the path of Lloyd Kelly, whose low shot was saved well to his right by goalkeeper Daniel Iversen.

Bournemouth took over and Iversen had to be on top form to palm a Jefferson Lerma left-footed curler away. For the rest of the half, it was more or less one-way traffic.

Danjuma should have done much better after good close control by Dominic Solanke but skewed wide after snatching at his shot. Then the same combination ended with Iversen parrying Danjuma's flick.

It was no surprise when the breakthrough came. Solanke used his strength to shake Jordan Storey off, got his head up and slipped in Danjuma, who made no mistake.

The biggest surprise of the first half came when Preston attacked just before half-time. On the break, Tom Barkhuizen played in a delightful cross and captain Alan Browne could not turn it in at the far post on the stretch.

Preston had looked every bit the side with injury problems undertaking their seventh game in 22 days. The Cherries looked fresh and ready for more.

Neil's words must have had some effect because North End had the first effort of the second half, the ball dropping kindly to Storey who volleyed wide from 18 yards.

Then the best chance of the game so far for Preston. Ben Whiteman found Ched Evans in space, but he blazed his volley over the bar with only Begovic to beat. Moments earlier Evans had another shot blocked.

After Johnson's equaliser, Whiteman went close to winning it late on for the home side, who were piling forward. His piledriver was tipped over the bar by the experienced Begovic.

This was an old-fashioned game of two halves and it took old-fashioned grit and determination for Preston to take a point that will feel like so much more.

Preston's Alex Neil: "I think performance-wise, first half we were disappointed. I said to them (at half-time), 'we need to squeeze the pitch better, play a higher line and be more aggressive, use the ball a bit better and pick that first pass out. There is no question that this game is there for us to get something out of it'. And I thought we did all of those things in the second half. Our line was much higher, we were more aggressive and we played better.

"Although in the first half they were better than us, the goal is really cheap. It is a channel ball, we got under the ball, Solanke just gives Jordan (Storey) a bump and then the wide player gets inside and manages to score. I still think we can play far better than that. But I think we played a bit better when we got the ball."

Bournemouth's Jonathan Woodgate: "We're really frustrated. I thought our first-half performance was terrific. I thought we could have been two or three goals up at half-time. Their keeper made some outstanding saves. We need to put those games to bed and then the second half comes back to bite you. Steve Cook has been top drawer for me this season but you make a mistake and get punished for it. He'll bounce back from it. There is not a shadow of doubt about that.