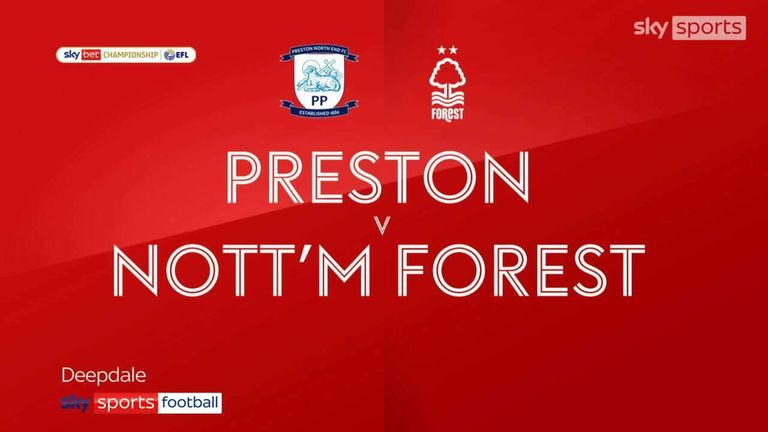 Highlights of the Sky Bet Championship match between Preston and Nottingham Forest.

Nottingham Forest missed the chance to climb back into the Sky Bet Championship play-off places after they were held to a goalless draw by Preston at Deepdale.

Keinan Davis was denied a penalty for the visitors in the opening stages and Preston's Cameron Archer missed two golden opportunities in the second half, and despite a relentless second-half onslaught by Ryan Lowe's side, both defences came out on top as the game finished goalless.

The game's first moment came in the 10th minute when Forest striker Davis appeared to be tripped inside the area but referee Geoff Eltringham waved away claims, much to the despair of the travelling contingent.

The home side took a while to settle down but came relatively close to opening the scoring when Ched Evans picked the ball up 25 yards out and decided to let fly, only to see his effort curl inches over the crossbar.

Preston were in the ascendency and midway through the first half, Ben Whiteman's corner found the head of Andrew Hughes but his effort bounced over the crossbar.

A quick Forest breakaway threatened to open the scoring in the 26th minute when Davis delivered a cross from the left and James Garner saw his attempt on the stretch fly straight into the arms of North End goalkeeper Daniel Iversen.

The home side continued to seek the advantage and following some neat build-up play with Daniel Johnson and Evans, the ball was given to Alan Browne but his shot was easily saved by Ethan Horvath.

After a quiet start to the second half, the first chance fell the way of the visitors when Steve Cook tried an audacious 25-yard effort which sailed way over the crossbar.

Preston should have been in front in the 55th minute when, after a spell of possession, Johnson slipped in Aston Villa loanee Archer who blasted straight at Horvath.

Seconds later, Archer missed another chance from close range as he went one-on-one with Horvath, the 20-year-old beating the offside trap but placing his shot the wrong side of the post.

The hosts kept on forcing the issue, this time Whiteman lashing wide of the near post after a neat one-two with Evans.

Another chance went begging with 15 minutes to go as Archer's deflected shot looped over Horvath but landed just wide of the far post.

Forest almost snatched a winner against the run of play at the death.

Djed Spence weaved in and out of the Preston defence with a dazzling run before flashing an effort across the six-yard box, but no one was on hand to tap home, meaning both sides took home a point.

Preston's Ryan Lowe: "I've told him [Archer] not to worry about it; it's not a problem, there's no blame culture. He's scored a load of goals for us already, he's going to score even more but I've looked at it back actually and it's harder than you think because the keeper's spread himself quite well. He scores goals like that every day in training, he's getting in fantastic positions, I don't mind as long as you're getting chances.

"I'd have thought they were more happy with a point than I am but I'm not disappointed with it. I'm happy because of the performance, which was better than it was on Saturday."

Nottingham Forest's Steve Cooper: "My personal view is that we should have got a penalty. I don't see why he [Davis] goes down. He beats the man, I've seen it back on the TV. He's in the box, he's a striker, he's a goalscorer, why would he go down if he's not fouled? We've had too many of those this season but it could have been pivotal tonight because the game could have been a lot different if we were 1-0 up."

"We never really got going in the second half, they've had two decent chances. I'm satisfied with the point looking at the game, I want to take the positives out of it, we kept a clean sheet and defended a lot of corners really well. I've just said to the boys we know we can play better, but you know it might end up being a good point."