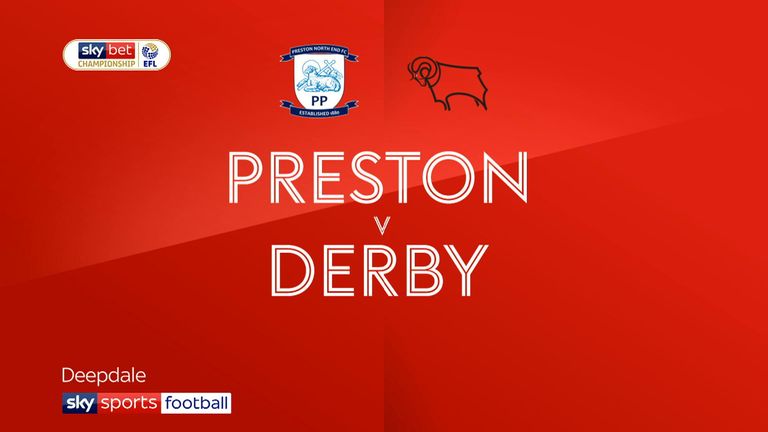 Highlights of the Sky Bet Championship match between Preston and Derby.

Derby survived a second-half onslaught from Preston to secure a goalless draw at Deepdale on Friday evening.

Harry Wilson hit the woodwork twice as Frank Lampard's side ended the first half on top, while Preston were fortunate to remain at full strength following a rash challenge from Ben Pearson on Tom Lawrence.

North End dominated after the break and ended the game having mustered 23 efforts on goal, but though Kelle Roos was tested on a couple of occasions, the visitors held firm.

Man of the match: Richard Keogh

Derby retain the final play-off position, though Bristol City could take their place with a win over Swansea on Saturday, while Preston remain 16th.

The hosts' confidence levels belied their league position heading into the game and they were asking questions of their opponents inside the first 120 seconds, when Jayden Stockley diverted Paul Gallagher's strike wide of the left-hand post.

Thanks to their continued energy and organisation, Preston frustrated Derby throughout the first 45 minutes and restricted them to half-chances that David Nugent and Lawrence skewed off target.

That said, Wilson has developed a penchant for scoring stunning efforts from range this season, but he was twice denied by the woodwork in the first half, with defender Ben Davies seemingly loath to close down the Welshman.

It was his side who were under the cosh after the break, though. Brad Potts' surging runs proved a threat, but lacked menace, while Darnell Fisher raced forward from full-back and forced Roos into his first real save six minutes after the restart.

While Alex Neil kept faith with the starting XI that beat Stoke 2-0 at the bet365 Stadium last weekend, Derby boss Frank Lampard was forced into two changes as Craig Bryson and Tom Lawrence replaced Mason Mount, who had been suffering with a hamstring injury, and the suspended Jayden Bogle.

Preston captain Gallagher saw his first-time volley saved as the pressure continued to mount on Lampard's side, though the commanding nature of their game didn't receive the rewards it perhaps deserved.

And as injury-time drew to a close, substitute Mason Bennett was floored as goalkeeper Declan Rudd raced from his line to collect an aerial ball, but replays showed referee Darren Bond correctly turned down half-hearted appeals.

Man of the match - Richard Keogh

Though the veteran defender still comes in for criticism from some sections of Derby supporters, his presence was a key component in the win on Friday evening.

Well-known as a rugged, battling centre-back, he was a rock in front of Kelle Roos, with the pick of his defensive interventions an acrobatic header flicked backwards out of the area.

Alex Neil: "If you look at the first 30-35 minutes, I thought we were the team on top. Credit to Derby, they changed that for the last 10 minutes of the first half. Second half we made a change; we played two number 10's, dropped Gally [Paul Gallagher] off a flank and that changed the game for us. 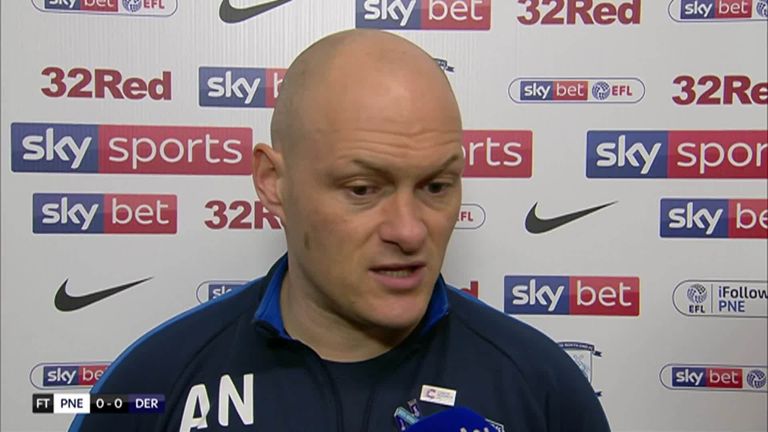 Preston boss Alex Neil felt his side probably should have gone away with all three points following the 0-0 draw with Derby.

Frank Lampard: "Minus four key players or not, it's a tough place to come; a tough Friday evening. They are playing well. I thought, as the first half went on, we became the better side, had a couple of chances and hit the woodwork. They were strong, so we have to be pleased with the point. "Richard Keogh has been great all season, him and [Fikayo] Tomori have formed a good partnership. They stood firm, but it was tough. Some of the physical side of it in the second half, some of the second balls that were dropping to them. In the first 20 minutes of the second half, we really struggled to get out. I thought they were solid and we needed that tonight."

Preston make the short trip to face Lancashire neighbours Bolton next Saturday, while the Rams host Hull City at Pride Park. Both fixtures get underway at 3pm.