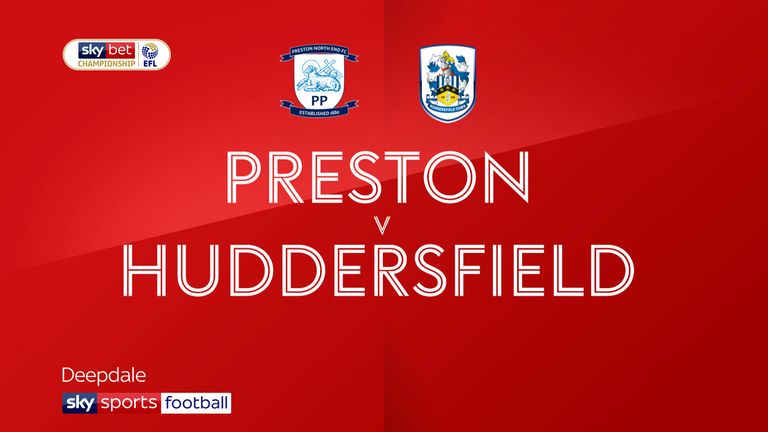 Preston cruised to a dominant 3-1 win at home to Huddersfield to remain second in the Sky Bet Championship table.

Huddersfield struggled to live with the attacking force of the hosts for the majority of the game, as Danny Cowley's side saw their seven-game unbeaten run come to an end in wet conditions in Lancashire.

The hosts were in confident mood from kick-off and Stockley handed them a deserved lead after just four minutes at Deepdale.

The former Exeter striker reacted quickest inside the six-yard box, as Gallagher's free-kick came back off the post, to nod past Kamil Grabara.

Neil's side pushed on from there in search of a quick second goal, with Sean Maguire heading two chances wide and Stockley dragging close range effort off target.

However, they were not left waiting long, as Browne doubled their advantage ten minutes before the break.

The Republic of Ireland international kept his composure to fire home Tom Barkuizen's cross from a tight angle for his first goal of the season.

Barkuizen was then inches away from putting the game out of Huddersfield's reach just before the half-time whistle, as he headed Stockley's flick on wide of the post.

Preston picked up where they left off after the restart with Browne heading Darnell Fisher's cross just wide.

But they only had to wait five minutes into the second half to put the game to bed, as Gallagher confidently fired home from the penalty spot, following a handball by Terence Kongolo.

The Lilywhites were in no mood for slowing down, showing their confidence as Browne tested Grabara with a 25-yard drive just after the hour mark.

However, despite struggling to create anything in the Preston half in the first hour of the game, Huddersfield did muster a response in the closing stages.

Juninho Bacuna showed real power to burst through two Preston tackles in midfield and with the hosts' defence backing off, he powered an effort home from the edge of the box on 74 minutes.

Browne was then called into emergency action inside his own box to make a sliding block from Alex Pritchard, before Bacuna wasted a great chance from 15 yards, with eight minutes to go.

And with the away fans finally finding their voice as the clock ticked down towards full time, Cowley's side almost set up a tense finale.

Pritchard pounced on a loose pass from Ryan Ledson on the edge of the Preston box and fed Bacuna clean through inside the area, but Preston keeper Declan Rudd did well to keep his concentration and rush off his line to make a brave stop.

Preston's Alex Neil: "I am really pleased, not just with today, but with our form in recent weeks. Today is another three points for us, with three goals to go with it, and we stay unbeaten at home. I cannot have much to complain about now, we are getting results and performing well. It was important to go in at half time in front, and I think based on the chances we created, we deserved that.

"We knew we would have to change something in our approach, as we were missing two important players, but the team reacted well and showed they can adapt in these situations. The important thing now for us in the coming weeks is to keep momentum going, we have a great run of form going and the players are confident. The players can be very proud of the run that we are on right now."

Huddersfield's Danny Cowley: "Of course a result like this is difficult to take, but I simply do not think we started well enough today, and that hampered us. We do have to praise Preston, they worked hard right from the start and we struggled to cope with them in the first half.

"They played with a real intensity and we found it hard to cope with that. We do not look for excuses in these situations as we cannot control things like the referee or decisions that may or may not go our way."